Dark and damp and cold. What a change from yesterday's weather! In some ways I'm glad, since those 80-plus-degree days we had for a week were way too hot for this time of year. But I also was disappointed, since I'd planned to visit Bog Meadow Nature Trail today to find Carolina Spring Beauty, a flower that closes up when the weather turns dark and cold. Sure enough, that's how I found it, with petals wrapped up tight as if the flowers were hugging themselves against the cold. I'll wait to take their picture when they turn their pretty faces to the sun.
My disappointment didn't last long, though, since I found lots of other spring flowers. But not the kind you might take calendar photos of. In fact, they hardly look like flowers, at all. For example, can you see the flowers down there in this mass of damp greenery?
You have to look very, very close to see teeny weeny American Golden Saxifrage, especially since it has no petals. Those little red blobs around the center are anthers, and the brownish ring is the part that produces nectar. Hmmm. Where are its pistillate parts? Guess I'll have to read up about this.

Here's another odd-looking plant. Looks like a tiny pine tree, doesn't it? (Ignore the swirly Rattlesnake Plantain leaves these tiny spires happened to be poking up from.) These are baby sterile stems of Horsetail Rush, which will grow to be three feet high or more, with whorls of lacy branches at each joint, although they were only about three inches high today. As big as they get to be, in some ways they are only half of a plant.

Here's the other (some might say, better) half: the fertile spore-bearing stem of the Horsetail Rush. That cone-shaped structure covered with polygonal scales is what produces the spores required for reproduction. After it releases its spores, it will disappear. (I don't know if that tiny stonefly is feeding on spores or just resting there awhile. I had read that the Giant Stonefly has no mouthparts, so it cannot feed. Would that be true for tiny stoneflies, as well?) 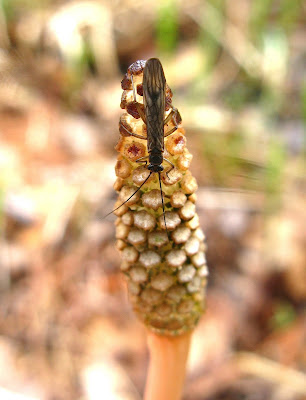 This little cluster of tiny yellow flowers was growing atop a slim jointed stalk, so it must be the flower of some kind of grass. ("Sedges have edges and reeds are round, and grass has a joint when the narcs aren't around.") Don't ask me what kind of grass. It was green and it had tufts of these tiny yellow flowers, which I had never noticed before. A new plant for me. I hope I will learn its name.

Speaking of new plants, a fellow flower enthusiast, Dave Behm, sent a comment to my blog post about finding Whitlow Grass (Draba verna), noting that he had just found it for the first time, too. And he suggested I read what Aldo Leopold had to say about Draba verna. Which I did. And it was so wonderful, I'm repeating it here in full. In many ways, what Leopold said about Draba verna could be said as well about all the flowers I found today. 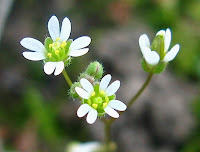 Within a few weeks now Draba, the smallest flower that blows, will sprinkle every sandy place with small blooms. He who hopes for spring with upturned eye never sees so small a thing as Draba. He who despairs of spring with downcast eye steps on it, unknowing. He who searches for spring with his knees in the mud finds it, in abundance.
Draba asks, and gets but scant allowance of warmth and comfort; it subsists on the leavings of unwanted time and space. Botany books give it two or three lines, but never a plate or portrait. Sand too poor and sun too weak for bigger better blooms are good enough for Draba. After all, it is no spring flower, but only a postscript to a hope.
Draba plucks no heartstrings. Its perfume, if there is any, is lost in the gusty winds. Its color is plain white. Its leaves wear a sensible woolly coat. Nothing eats it; it is too small. No poets sing of it. Some botanist once gave it a Latin name, and then forgot it. Altogether it is of no importance -- just a small creature that does a small job quickly and well.
Aldo Leopold, A Sand County Almanac, 1949

Posted by Jacqueline Donnelly at 9:49 PM

Ohhh - you almost feel sorry for the poor Draba! But we know it is loved by the truly dedicated: You, Dave and Aldo! I'll be looking for it now, too!

Nice of you to bring in a great quote from one of the Founding Fathers!

Just found your blog and enjoy it so much. Will definitely check it out often.