Earth Day! With all the massive earthquakes, 100-year floods, and world-interrupting volcanic eruptions we've been having lately, it seems like Mother Earth is not feeling very well. I think she may be doing all she can to rid herself of this pestiferous human race. It's as if we humans were infectious germs that have stimulated her immune system to attack us. And we deserve it.
Sorry to be so glum. But I spent the afternoon paddling the shores of Moreau Lake, fishing the most disgusting stuff out of the water and off the beach. Beer cans and bait boxes are one thing, but jeez! If you go to the trouble to pick up your dog's poop in a plastic bag, why not carry it off to a trash container instead of flinging it into the stands of Phragmites? Grrrr!
Actually, I had a great time, joining Moreau Lake State Park staffers Ben Snyder and Rebecca Mullins on an Earth Day clean-up of the shoreline. I'm always game for a paddle, made even more fun today by the pleasure of their company and the satisfaction of doing something useful. 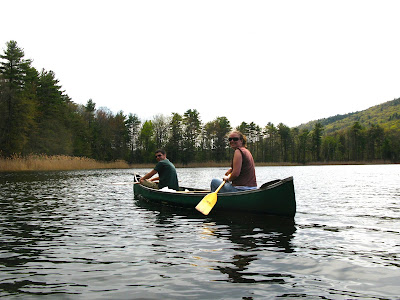 And of course, there were other companions to add to the task's enjoyment. Like this Red Winged Blackbird guarding his nesting site. 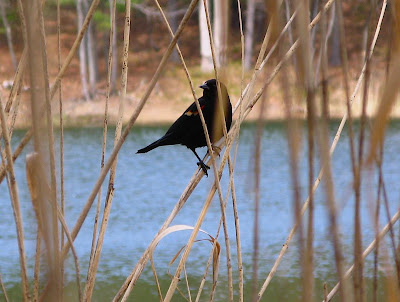 And this log-full of Painted Turtles. I couldn't believe they hadn't dived off, as the dozen others sharing a nearby log had done. 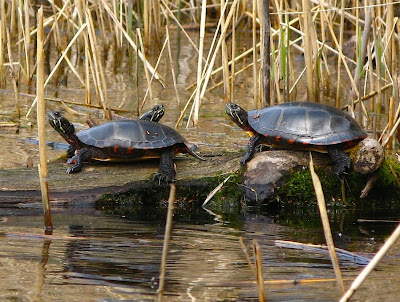 This Mother Goose didn't dive off, either, and for very good reason. No doubt that's a nest full of eggs she's sitting on, perched on top of this active beaver lodge. We could tell the lodge was still active because of the recent addition of new sapling limbs and the piles of newly peeled branches. 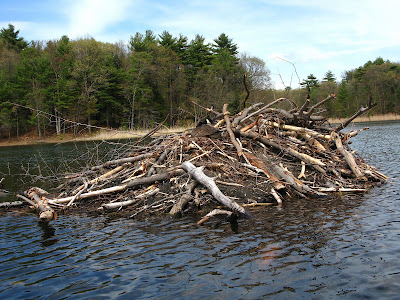 So despite my despair about slobby humans despoiling this beautiful place, I found much to be happy about, with all this evidence of continuing life. For example, I reached down into the water to grab what I thought was some plastic trash, and discovered a diaphanous egg mass instead. (Anyone know whose eggs these might be?) 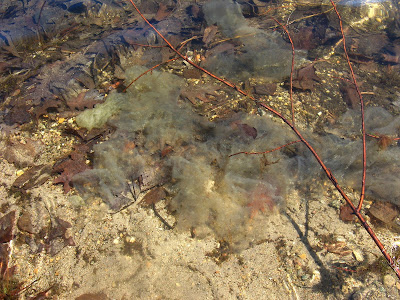 So life goes on. Hurrah! The signs are everywhere.
I am reminded of a poem by Gerard Manley Hopkins:
God's Grandeur
The world is charged with the grandeur of God.
It will flame out, like shining from shook foil;
It gathers to a greatness, like the ooze of oil
Crushed. Why do men then now not reck his rod?
Generations have trod, have trod, have trod;
And all is seared with trade; bleared, smeared with toil;
And wears man's smudge and shares man's smell: the soil
Is bare now, nor can foot feel, being shod.
And for all this, nature is never spent;
There lives the dearest freshness deep down things;
And though the last lights off the black West went
Oh, morning, at the brown brink eastward, springs --
Because the Holy Ghost over the bent
World broods with warm breast and with ah! bright wings.
Posted by Jacqueline Donnelly at 9:28 PM

Best wishes for her speedy recovery!

Hi Jackie, it was nice meeting you yesterday. I too enjoyed the wonderful day. However, I didn't manage to see all the wildlife you did. Thanks for the pictures.