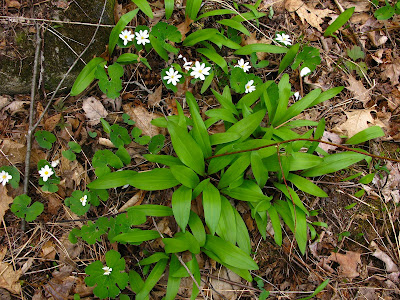 Ooh, look what I found in the woods! At first I thought these soft green leaves were Lily-of-the-Valley, but a closer inspection (and a sniff and a taste) revealed they were another member of the lily family: Allium tricoccum, or as they're commonly called Down South, Ramps. Also called Wild Leeks.
I've read that Ramps are all the rage among foodies right now, so I'm going to keep their location secret, for fear of extirpation. I did dig a few just to see what the fuss is about, and I must say, they are delicious. Trimmed of roots and dirt, coarsely chopped (leaves and all), sauteed quickly in olive oil and seasoned with salt and pepper, they really were yummy. Mild onion taste, the leaves almost sweet. I know that they figure prominently in Southern folklore, but I had no idea they grew around here. I probably passed them over before, thinking they were something else. Later in the summer, after the leaves have disappeared, they will bear an umbel of small white flowers on a single stalk. I think I will try to collect their seeds and grow some in my own woodsy backyard. Wish me luck.
Posted by Jacqueline Donnelly at 5:17 PM

If anyone would find these, I knew it would be you. Wise to keep the secret. My herbivore son-in-law asked me about them just last week. I told him I used to have my shoes and shins covered with their aroma when I worked on wooded hillsides during my days at ESF, but I had not noticed them around Saratoga. Good luck with the garden!

Mmmm! The wild leeks were a big hit with our interns when I worked in VT. I've casually looked for 'em here, but haven't found any.

Thanks for your comments, Wayne and Ellen. Folklore about Ramps always seemed to imply that they were very stinky and strong-tasting. But I found them to be quite sweet and mild when sauteed.