Catching Up on the Week's Adventures

A busy week has kept me from blogging since Friday, but that doesn't mean I haven't been getting outdoors. On Monday, I took a friend to the Ballston Creek Preserve over near Ballston Lake, a forested parcel preserved by Saratoga PLAN that leads to a Great Blue Heron rookery. We didn't quite make it to the rookery, since the trail turned too mucky for my friend to navigate, but we still enjoyed walking through this beautiful woods, which was carpeted with more Carolina Spring Beauties than I've ever seen in my life.
Another flower gracing that Ballston woods on Monday was Barren Strawberry. True, this plant bears a fruit that is dry and inedible, but I wish it could have a more positive common name that truly represents how pretty it is.

Tuesday was busy with Hospice volunteer work and preparing to celebrate my son Philip's birthday, but today was all mine to enjoy a hike with friend Laurie, exploring trails in Moreau Lake State Park that took us to marshy pools high in the mountains.

Lining the rocky trail we climbed were many wildflowers just coming into bloom, including clumps of snowy white Early Saxifrage.

When we reached the pools, the first thing that struck me was how GREEN it was all around them, with mosses thickly covering fallen logs and bright grasses growing lushly on the banks.
These are not, strictly speaking, vernal pools, since they don't dry completely over the summer, but remain marshy enough to support the growth of Sphagnum Moss, among other mosses. 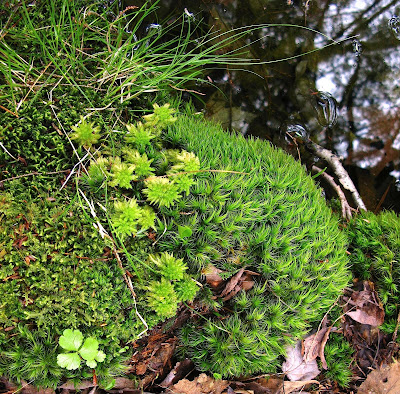 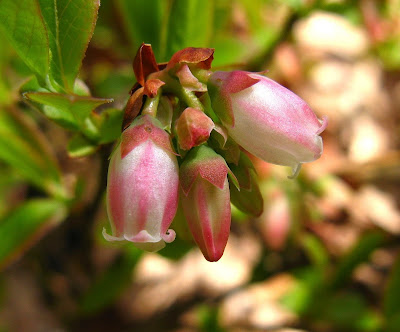 Another flower that loves damp spots is Goldthread, with glossy evergreen leaves and a corolla that bears very odd-looking petals. Those white parts around the outside are, in fact, sepals. Those yellow, jelly-like little clubs are the actual petals. In this photo, the stamens are white, and the pistillate parts are the prettiest apple green. 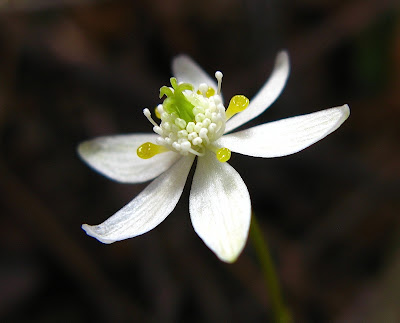 Many large ferns of several kinds were unfurling their fronds, most of them covered with fuzz. These teeny, tiny coils, maybe half an inch high and growing out of a clump of moss, were bald and glossy exceptions.

The moss those tiny ferns were inhabiting was a shiny dark green and leafy, each leaf with a dark midrib. The filaments holding the spore caps were dark red and the spore caps were lemon yellow. I have never seen this moss before, and of course, I don't know its name.
Here's a close-up of some of those spore stalks. They remind me of tiny lemons. I wonder if those shiny green shoots will develop into spore stalks.

My friend Laurie is a geologist, so of course we stopped to examine the rocks as we walked along. This beautiful quartzite boulder, with its fringes of moss, is representative of much of the rocky outcropping that surrounds the marshy pools. 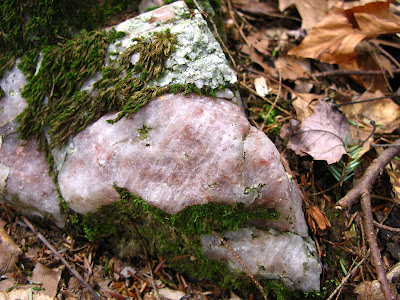 On our way down the mountain, we crossed a small rushing stream, where I noticed these underwater plants flowing and swirling with the current. I could have sat mesmerized by their motion for hours, but we both needed to make our way home. 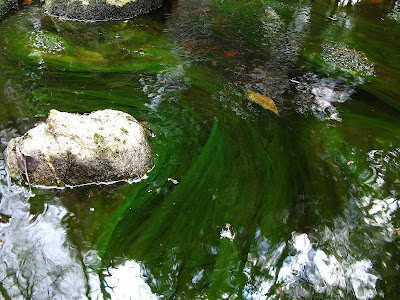 One errand I had to accomplish today was to pick up brochures from the Wilton Wildlife Preserve and Park. My friend Sue Pierce and I are presenting a program of photos and commentary about our nature adventures at 6:30 on Friday evening at the Unitarian Church in Queensbury, and we want to have brochures available from many different parks and preserves in the surrounding area. So off I went to Wilton. And of course, I had to visit the woods while I was there. That's where I found these Dwarf Ginseng growing abundantly along the path.

On my way home from Wilton, I passed a cemetery where vivid pink patches of Moss Phlox are spreading among the graves. So naturally, I had to pull over and take their picture.
My Newcomb's Wildflower Guide tells me that this flower is native to our area, although it grows in New England only where it escapes from cultivation. Aren't we lucky to be able to claim such a beautiful flower as our own?
Posted by Jacqueline Donnelly at 9:42 PM

Wow, your photos are wonderful. The composition of your spring beauty group is especially nice, and the "spotlight" on the goldthread, with the selective focus against the dark background is nice (even if parts of the petals got overexposed -- a minor nit). I enjoy all your trips. Thanks for sharing.

Paul: When will you be back in Saratoga? I'm leading a nature walk at Bog Meadow again this year on May 22. It was great having you along last year.

Wayne: I feel very humble about your praise for my photos. I clicked on your name and gained access to your website of spectacularly beautiful photos, and I encourage all my readers to do the same. I am just amazed by how often you happen on "the perfect moment" and capture the images with great skill. If I get a good photo, it's usually a happy accident, since I really don't know how to make my camera (a Canon PowerShot G7) behave. I need to find someone like you to give me lessons.

That final photo of the pholx is stunning!

And that moss is interesting, too. It doesn't ring any bells from my brology class, but if you like, I'll send a copy of your photo to my moss prof. and see if she will ID it for us!