Through Dark Woods to a Sunlit Marsh 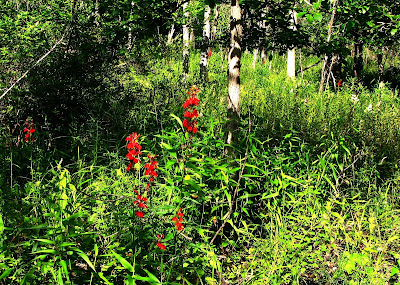 Cardinal Flowers love this damp sunny spot on the banks of the Hudson River
Whadda ya know? It didn't rain this afternoon. So I headed up to the Hudson River, but not to put in my canoe. Today I decided to walk through the woods to a marsh, tracing the same path I took many times last winter on my snowshoes. And let me tell you, two or three feet of snow on the ground make for much easier going (on snowshoes) than scrambling over downed trees and mossy rocks and scratching my shins on twigs. And oh, was it dark in there! Lots of hemlock trees, plus the closed-in canopy, and dark earth instead of white snow. There were dozens of colorful mushrooms, but not one could I photograph in the dim light, until a pinpoint of sun pierced through and lit up this little Amanita Muscaria like a glowing lamp. 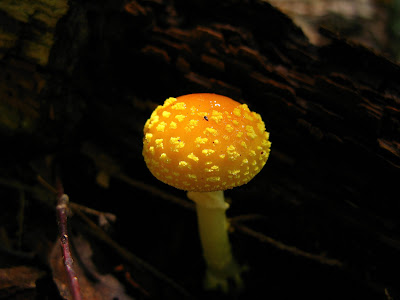 The goal of my trek through the woods was to find a Green Wood Orchis (Habenaria clavellata). I had found one a year ago, but my hopes today weren't high, since this is a very small orchid the same color as the moss it grows out of, and I hadn't noted exactly the spot where I'd found it. Plus, my eyesight is far worse this year than last. But lo and behold! There it was! And not one, but at least nine of them! They were growing close to a woodland stream where a log fell across the water and a huge root mass from a fallen tree loomed a dozen or so feet away. (This time I'm noting exactly where I found them.) This photo is the best my stubborn little camera would do in dim light (Darn! but it would not focus!), but at least you can see its distinctive spur, long and slender and curved.
My path through the dark woods led to an open, sunny area close to the river, where brilliant Cardinal Flowers shared their damp turf with Meadowsweet, Steeplebush, Boneset, Monkey Flower, and Buttonbush. Here I also found Marsh St. Johnswort (Hypericum virginicum) in bloom -- a seemingly rare event. I find these plants all over the Hudson banks, their leaves often startlingly pink or coral or burgundy red, but only now and then do I find them in bloom. A real treat when I do, they are so beautiful. Our only pink St. Johnswort.
The next flower I found is not rare at all, but I'll bet it is rarely seen. It's called Water Purslane (Ludwigia palustris), and its pretty green leaves and reddish stems sprawl wherever the ground is damp and sunny. But its flowers are really, really tiny and hidden among its leaves, where they grow, two at a time, from the leaf axils. Not particularly beautiful, but still, I rejoiced the first time I found them, hidden treasure that they are.
Now, Larger Blue Flag (Iris versicolor) is abundant along these shores in late May. But what's it doing still in bloom in July? Delighting my eyes, for one thing, and granting a little surprise.
As I pushed through the waist-high sedges here, all kinds of critters hopped and scurried and slithered away down around my invisible feet. Frogs and snakes, I imagine, and I think I caught a glimpse of a shrew. How frustrating that they hurried away, so I couldn't take their pictures. But one critter landed in view, on a Buttonbush leaf, and I'd never seen a fly (?) so beautiful. Its whole body was bright orange, with shiny, coal-black head and wings. It stayed just long enough for one quick shot. Anyone know its name? (See postscript below.)
Then a crowning touch for a wonderful afternoon: this beautiful Little Wood Satyr (Euptychia cymela) lit long enough for me to enjoy every shade of its soft lovely colors. Thank you, dear butterfly.
Postscript: I submitted that orange bug's photo to a website called "Bug Guide" and received a very prompt response from a gentleman named John R. Maxwell. He identified it as an Argid Sawfly (Arge humeralis). Sawflies are members of the Hymenoptera, which includes wasps and bees, so this is a sort of wasp, not fly, but one without a narrow waist, nor a stinger. Female sawflies have saw-like ovipositors, which they use to cut slits in leaves where they lay their eggs. Thank you, Mr. Maxwell.
Posted by Jacqueline Donnelly at 9:19 PM