With the weathermen blaring so many "heat advisories" lately,  especially for old people like me, I do ponder whether to stay indoors with the AC blasting.  But the Winged Monkey Flower should be blooming now!  This species (Mimulus alatus) is rated as a Rare plant in New York (even rarer in New England), and if I didn't get out to look for it now, all this heat might cause it to fade.   Luckily, it grows along a creek that flows through deep shade, so that's where I went to meet my fellow wildflower-obsessed pals Sue Pierce and Ruth Brooks this week.  Sue is the person who first discovered this flower at this Saratoga Battlefield location --  and it wasn't even in bloom when she first noticed its spent flower stalks, on a mid-autumn hike three years ago. 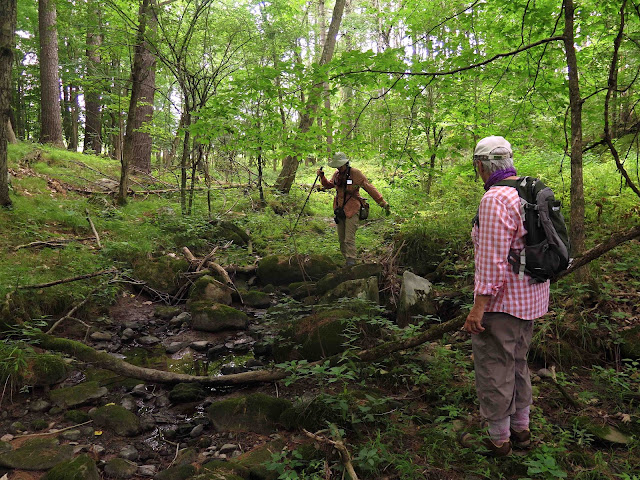 When we first reached the creek via a hiking trail, we were disappointed to find most of the nearby Winged Monkey Flower plants had already dropped their pale lavender blooms.  But as we gingerly picked our way along the nearly dry rocky creek bottom, we came upon a cooler, wetter area where many plants still held their flowers.  Sue documented their presence with photographs and a specimen count.  As of yet, this species has not been documented as present in Saratoga County, although I hope that will change when Sue submits a specimen to state botanists.
This is my photo of Winged Monkey Flower, displaying the winged leaf petioles that suggested both its scientific and vernacular names.  This photo also demonstrates the long leaf stalks and very short flower stalks of this species, just the opposite of the leaf/flower arrangement of the much more common species of Monkey Flower (Mimulus ringens).
This is my photo of the very common Monkey Flower (M. ringens) that thrives in almost every kind of wetland across nearly every county in New York State.  Note the differences: royal-blue (not lavender) flowers held on long stalks, and unstalked leaves that are sessile to the stem.

The flowers of both species are similar in shape (this is the flower of Winged Monkey Flower).  Supposedly, the vernacular name was inspired by the flower's resemblance to the face of a monkey.  Personally, I  don't see it.  But that's the story.

Now that we were reassured that our rare flower was still where we'd found it before and that its numbers were still abundant, we continued our walk.  We even briefly ventured out onto the sunny meadows, the splendid beauties of which compensated for the discomforts of midday heat.  Spotted Joe Pye-Weed (Eutrochium maculatum) was in full gorgeous bloom, with big fluffy rosy-pink flowerheads flourishing across the open fields.
Acres of Tall Goldenrod (Solidago altissima) vied with that Joe Pye-Weed for floral abundance and color, and the lower-growing, white-flowered Narrow-leaved Mountain Mint (Pycnanthemum tenuifolium) also bloomed profusely (dotted with occasional rosy blooms of Brown Knapweed [Centaurea jacea]). 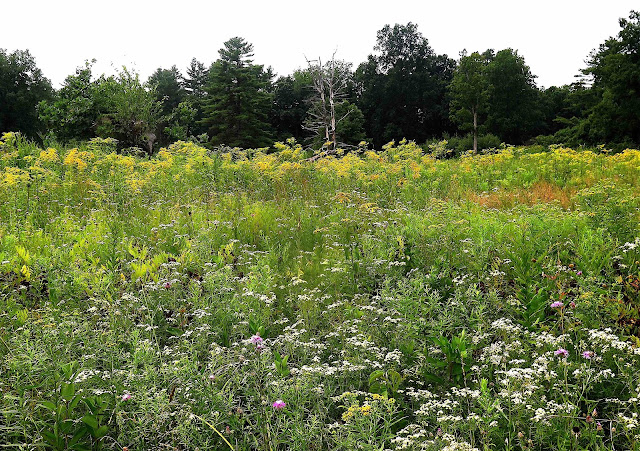 A close look at the flowers of Narrow-leaved Mountain Mint reveals that those small white flowers are dotted with tiny purple spots.  The same close look also reveals this beautifully-colored Scarlet Plant Bug (Lopidea sp.) roaming around the florets.  This bug is difficult to pin down as to species, but most are known to cause little damage to plants, aside from occasionally disfiguring the leaves they feed on.  Since mountain mints have very strongly scented leaves, I kind of doubt that many insects feed on them.
Such floral abundance of course meant there would be insect abundance as well, and the very air was humming from the clouds of bugs, bees, beetles, butterflies, and moths that were busily feeding on the blooms.  Although the blooms on this particular patch of Wild Bergamot (Monarda fistulosa) were  beginning to fade, they apparently held sufficient nectar to entice this big beautiful Giant Swallowtail Butterfly (Papilio cresphontes) to stop for a taste of it. 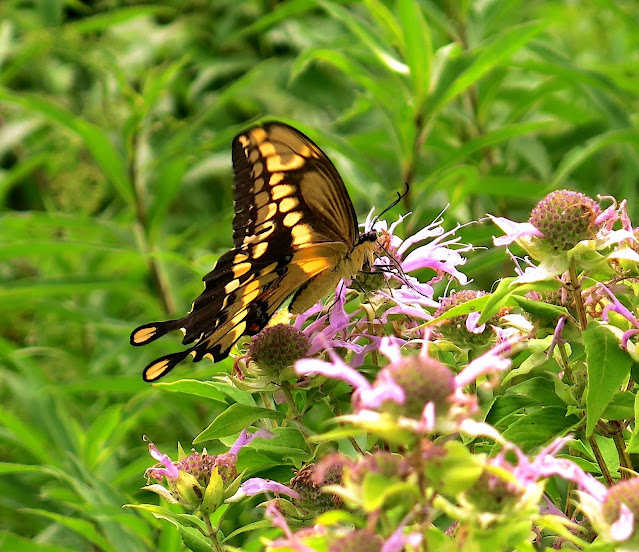 Almost every cluster of Wild Bergamot was being explored by Hummingbird Clearwing Moths (Hemaris thysbe), large colorful moths that hummed and hovered just like a hummingbird.  Their flight was so rapid and erratic I could not capture a photo worth using here, but I found a photo in my files that looked just like the same ones I was seeing today.  Even the flower species was the same!
Damp sections of the open meadows held vast thickets of colorful Gray Dogwood (Cornus racemosa), the fruit ripening to porcelain-white berries held on scarlet pedicels.  Even now, some of the leaves were turning, on their way to becoming the deep burgundy-red of their autumn coloration.

Then there was this spiny multi-flowered plant, standing tall above all the other plants of the field.  A thistle, of course.  But which one?  My friend Ruth took out her smartphone and promptly took a picture to send off to iNaturalist for suggested IDs.  In the meantime, I looked for distinguishing features that might set this thistle apart from others of the Cirsium genus.

A close look at the flowerhead revealed slender hairy leafy bracts that curled up to create a cage around the not-yet-flowering involucre. Each scale-like bract (phyllary) around the involucre was armed with a long slender spine that appeared to be bent at the base.  Each of the flat green phyllaries (involucre bracts) displayed a white central vein. The whole flowerhead appeared to be wrapped with fine silken threads, but that might have been woven there by a visiting spider or other web-spinning creature, and not be a distinguishing feature of this species.
The thistle's long leaves were both hairy and spined, while the stalk was hairy without spines.  The  most distinguishing feature of the green leaves was the white undersurface, caused by dense mats of fine white hairs.  It was this feature, of leaves of two colors, that made me think of the botanical term discolor, meaning of two colors. Then bingo!  The app iNaturalist came through with the name Field Thistle, scientific name Cirsium discolor.  How about that?!  I myself eschew the use of cellphone apps, but it sure was fun to have a confirmed ID while standing out in an open field, far from my wildflower guides at home.  Thanks, Ruth!

So.  Field Thistle it is.  A native thistle species, but not a rare one at all.  But it was a new plant for my life list, so I was mighty glad to have seen it and learned its name.

By the way, I found on-line a drawing that illustrates some of the plant parts I mention in this discussion of the thistle. It appeared in the book San Diego County Native Plants by James Lightner (2011), and I found it very useful for when I tried to describe the parts of this  (or any other) plant. 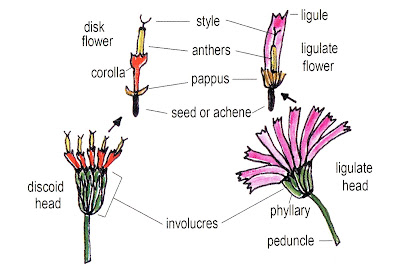 Posted by Jacqueline Donnelly at 3:58 PM

...for me, Eutrochium maculatum is one of the stars of the show in August. The Giant Swallowtail Butterfly and Hummingbird Clearwing Moth would be welcomed guests here!

You're a great group of plant detectives!

Update- if the Mimulus plants are still fresh next week, a specimen will be collected & submitted for State records, under the guidance of Park staff, since this is National Park property.

How wonderful to add a plant to your life list! It seems to get harder and harder as you see more species, at least with the birds I chase. Kudos for getting out and about in this weather. I find myself getting up really early and getting things done and then hibernating when the heat hits.