I returned to Bog Meadow Brook Nature Trail early this week to show my friend Ruth Brooks the beautiful Nodding Trilliums (Trillium cernuum) I had seen a few days before.  And yes, we did see many of the typical white-flowered Nodding Trilliums. But look what else we found: one that was colored the most remarkable raspberry red!

Except for the color, this bloom displays many of the typical characteristics of Trillium cernuum, including the sharply recurved petals and the noticeable filaments to the anthers, so we knew it was not a Red Trillium (T. erectum) instead.  But it could be a hybrid of the two trilliums, since both species thrive along this trail.  The Red Trillium comes into bloom a few weeks earlier than the Nodding Trillium, but there is a bit of overlap some years in their bloom time, which would certainly allow for cross pollination.  And I have seen other evidence over the years of the two species hybridizing.
Since my last visit to this trail, a number of other favorite spring wildflowers had come into bloom. I am always struck by the lovely bluish cast to the green leaves of Star-flowered False Solomon's Seal (Maianthemum stellatum) and the terminal cluster of delicate star-shaped white flowers.  Every year I find more and more of this beautiful plant, now numbering close to a hundred specimens, having spread from the original ten I found nearby about 12 years ago. 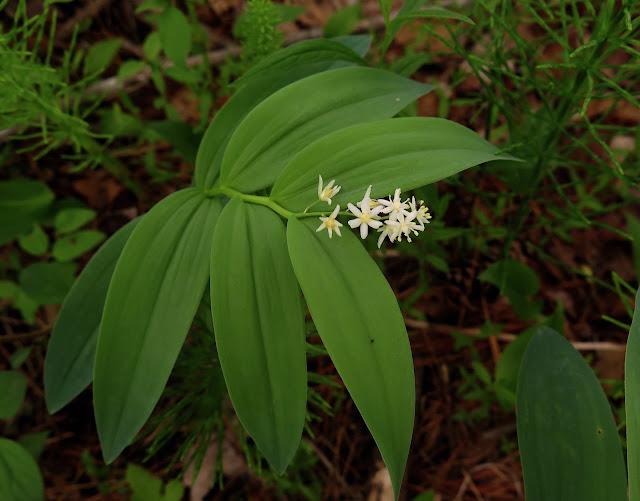 Another star-flowered beauty of the spring woods is this one, which is actually called Starflower (Lysimachia borealis), an apt vernacular name if there ever was one. Many were starring the path where it leads through the shady forested wetlands. 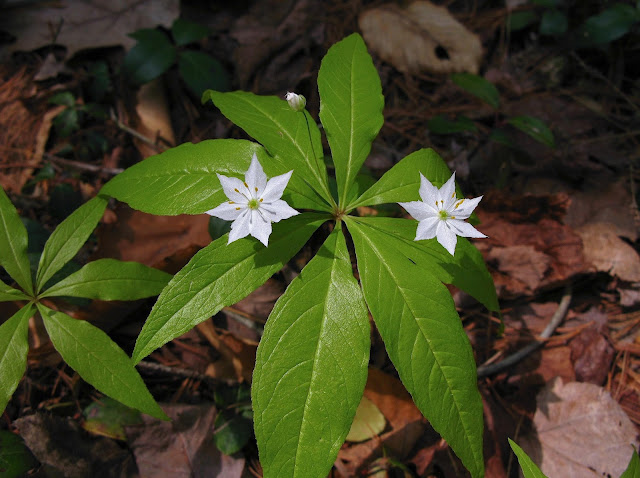 And those lovely Starflower blooms are never lovelier than when sharing their woodland turf with the equally beautiful and gorgeously colored Fringed Polygala (Polygaloides paucifolia). 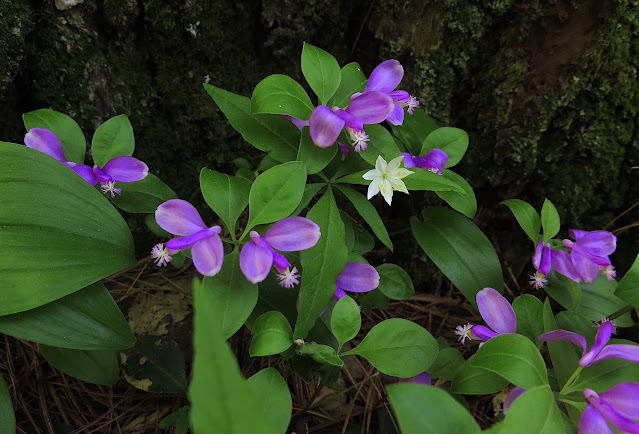 A much shyer kind of beauty is offered by the diminutive white blooms of Grove Sandwort (Moehringia lateriflora), which make up for their small size by growing abundantly along Bog Meadow Trail.  I find these flowers in great numbers here at Bog Meadow but hardly anywhere else I wander in Saratoga County. This surprises me some, especially since this species is native to nearly all of the northern regions of the world: Europe and Asia as well as North America.
And lest one dismiss the tiny white flowers of Grove Sandwort as just no'count, plain-vanilla blooms, take a close look into the heart of one, and note the delicate silvery wisps that surround the stamens circling a shiny green ovary. 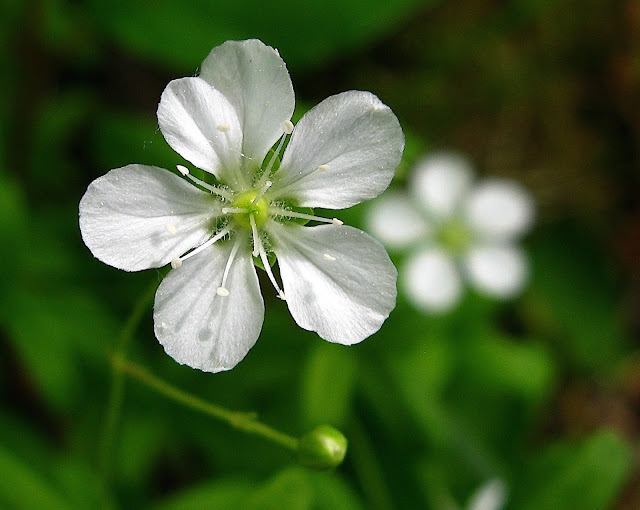 Of course I extol these native wildflowers!  There's no doubt they are as valuable to their environment as they are beautiful.  But my steps also screeched to a halt to admire this exquisite globe of Dandelion seeds, still held in a perfect orb before the wind could waft them away or the approaching rain could dampen their fluff to a soggy mat.  A "weed" Dandelions may be, but oh, they are beautiful ones!
But while I can still find it in my heart to celebrate the beauty of an alien weed like a Dandelion, I only feel a red rage when I find (as I did this week) these Scarlet Lily Beetles seen below.   Especially when I catch them in the act of reproducing more of what will be the horrid, poop-covered larvae that will eat every Canada Lily plant down to the ground. 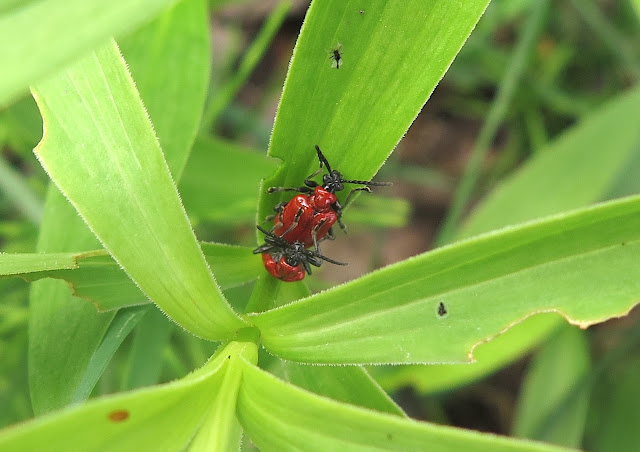 Bog Meadow Trail was for years the site where I could count on finding this native lily (Lilium canadense) in every gorgeous color it's known to bloom in: yellow, orange, and red.   Some of the plants here bore as many as ten blooms in whorls around the top of the stem. Here's a photo I took of one displaying such floral abundance a few years ago:

Sadly, I may not live long enough to witness such abundant blooms of Canada Lilies along this trail again.  A few single-flowered stragglers remain (or have for the past two years), but now that I've seen that the beetles are back, the lilies eventually may be wiped out completely along Bog Meadow Brook Nature Trail. Here's hoping not!

Meanwhile, I'm glad there's still so much wildflower beauty to celebrate at this marvelous site.

Posted by Jacqueline Donnelly at 2:25 PM

Is there some way to protect the lilies -- some sort of natural remedy? (are the beetles native?)

I wonder if the appearance of "hybrid" Trilliums is caused by climate change/warming -- causing the Red and Nodding to bloom closer to the same times, instead of weeks apart, thus increasing the possibilities of cross-pollination...?