One of my good botanical friends, Sigrin Newell, sent me this reminder about an invasive plant called Summer Snowflake, which shortly will be coming into bloom, and I want to share what she had to say about it here. Here's what the flower in question looks like:

And here's what Sigrin wrote to tell me about it:
For the next several weeks, there is a pretty flower blooming in many gardens. Summer Snowflake (Lecojum aestivum) has the potential of becoming invasive. This plant is a good entry into a larger discussion of emerging invasives. These are escaped ornamental plants that have been found growing in woods and on roadsides. Eradication efforts made now can potentially stop the plant from getting out of control and becoming truly invasive.

My botanist friends and I were hiking in Anchor Diamond Preserve, near Ballston Spa, New York. There we found Summer Snowflake blooming deep in the woods, far away from any cultivated garden. 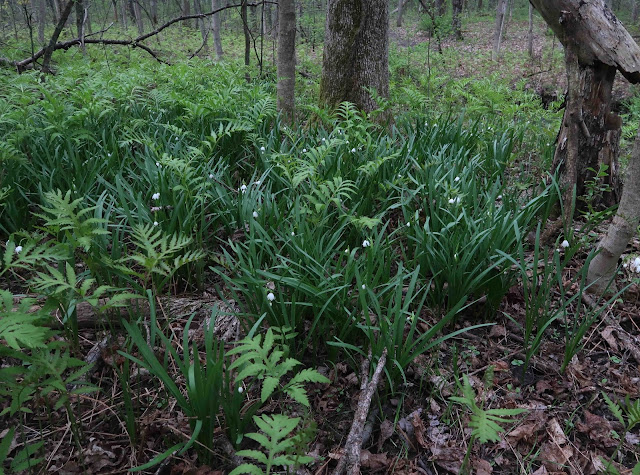 Concerned that a garden flower had made such inroads into a nature preserve a long way from anyone's garden, one of us sent some photos to Steve Young at New York Flora Association, who immediately got back to tell us that he had encountered a whole half-acre of this plant in a nature preserve in Onondaga County. “Its invasiveness is a concern,” he said.
When I read this reply, I began to worry. I have been growing and enjoying Leucojum for several years. If we are seeing the beginning of another invasive scourge, we need to get the word out widely so that it can be stopped before the plant crowds out our native wildflowers. The Leucojum in my garden went from four bulbs to nearly two dozen plants in a couple of years. Once it grabs hold in the woods, it could spread quickly. Sources on the web say that the seeds are wind and water dispersed, and thus get deep into the woods.
I checked the web and many gardening sites are recommending the plant, praising its ability to increase rapidly on clay. However, there are also reports of invasions elsewhere. In England, it has been recorded that flooding causes the stems to break and the fruits to be carried downstream and stranded in river debris on flood-plains or high on the banks during floods. All species of Leucojum contain poisonous alkaloids, indicating that they have few natural predators to keep the population in control. This adds up to a recipe for an invasion within a few years. We could have another Purple Loosestrife on our hands.
Since Summer Snowflake is a lovely flower that is still being sold in many garden centers, it is important to get the word out. People need to know of the problem. The flowers make fine indoor bouquets that last for up to a week. Merely picking the flowers and bringing them indoors will prevent the seeds from being dispersed. 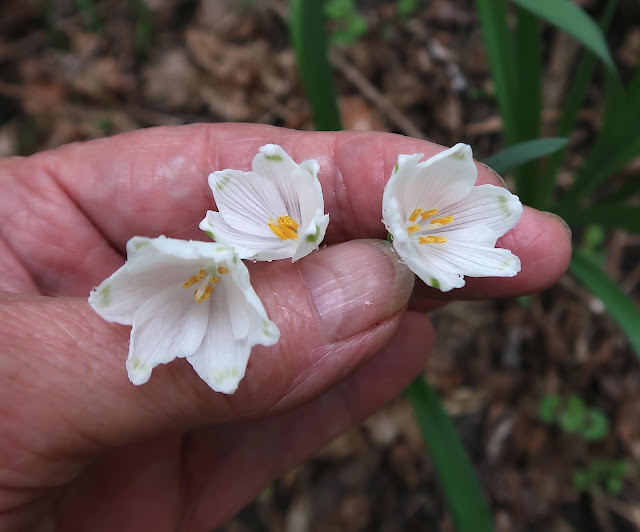 Sigrin added the information that there is an organization that tracks invasive species and works to eradicate them, especially the emerging ones where there is hope of stopping their spread. The Capital-Mohawk PRISM (Partnership for Regional Invasive Species Management) coordinates efforts in eleven counties.
Posted by Jacqueline Donnelly at 3:08 PM

I have never seen this plant, but I would have been tempted to purchase it if I hadn't seen this post. Thanks

Invasives are here to stay as we gradually homogenize the world's flora and fauna. So far efforts to control invasive plants and insects have been exercises in futility with only limited short-term successes. As long as the country permits introduction of new ornamental plants from around the world and the sale of known invasives, efforts to control or eliminate invasives will have very limited and localized success.