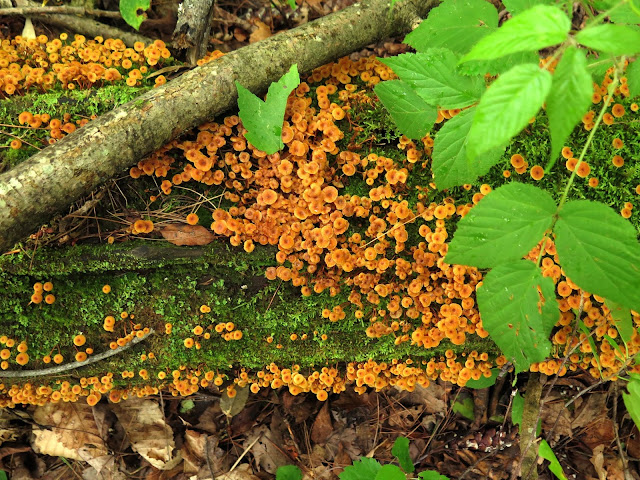 For years, I've been encountering fallen logs in the forest that were absolutely paved with tiny orange mushrooms, like those in the photo above. This astounding fungal abundance was one of the traits that made this little fungus easy to find in my mushroom guides and learn the name of: Xeromphalina campanella.  My mushroom guides also told me that the scientific name, loosely translated, means "bell-shaped little belly-buttons." Yeah, I get that resemblance.  But I also learned that the common name of this common fungus was "Fuzzy Foot," because of the tiny hairs that were found at the base of the stem. "Found by whom?" I often wondered, since no matter how many stems I observed, I never saw any hairs.  Until this week, that is.


This week, I encountered this little mushroom once again, massed on a fallen log near a stream in Moreau Lake State Park.  As usual, I peered at the base of the stems, but at first (and also as usual) I could see no basal hairs.  But the wood of the log was so rotten it came apart in my hand, and thus revealed a part of the stem I had never seen before.  And lo!  Finally found: this little fungus's truly fuzzy feet!  Ta da! 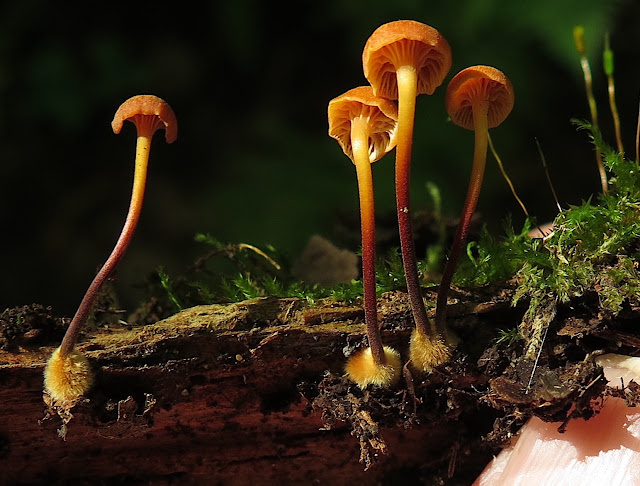 Finding the fuzzy feet on those Fuzzy Foots would have been enough pleasure for one day, but I also had the pleasure of Nancy Slack's company, as well.    Nancy is an expert bryologist, and we were searching a rocky stream bed for whatever bryophytes (mosses and liverworts) we could find. Nancy, a retired professor of ecology at Russell Sage College,  still teaches a bryology class, and she was collecting specimens of many different mosses and liverworts to show to her students. 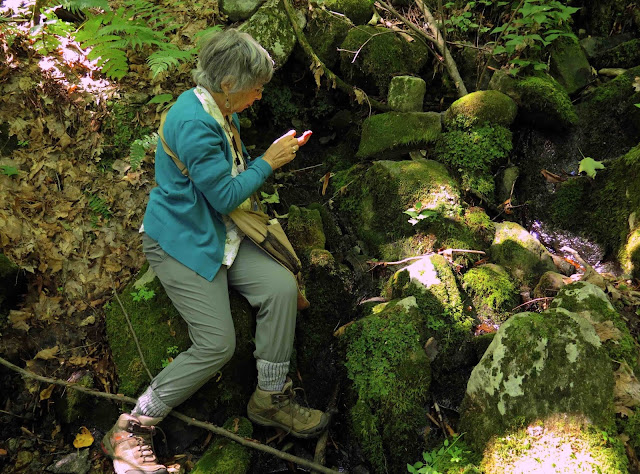 Although I am not officially enrolled in Professor Slack's bryology class, I am certainly one of her students, for she teaches me something new each time we venture out together.  And here was a new one for me:  I had assumed it was a moss, but this is a leafy little liverwort called Plagiochila asplenioides that was growing on one of the rocks that were watered by the stream. 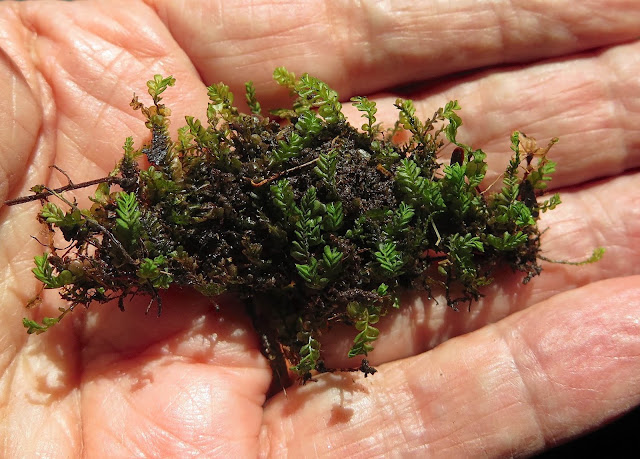 Unlike most species of liverwort, Plagiochila asplenioides does have a common name, which is Greater Featherwort. OK, I see the resemblance.   I had to wonder, though.  If this is the GREATER Featherwort, how much smaller would a LESSER one be?  This one seems pretty small already, to me.
Posted by Jacqueline Donnelly at 1:48 PM