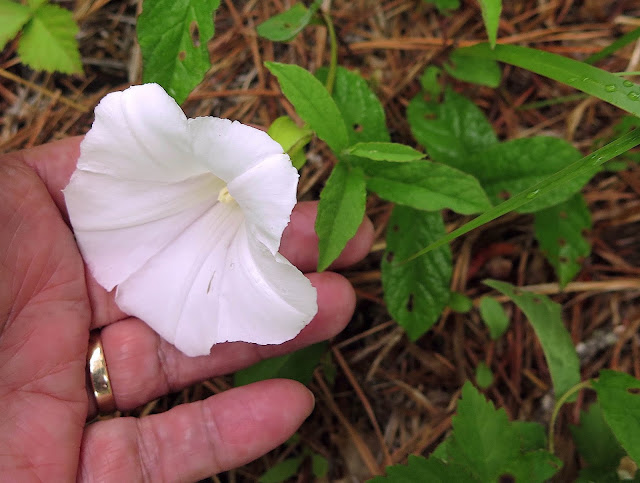 After some 20 years of documenting all the wildflowers I find, it's not that often these days that I come upon one I have not yet recorded in my wildflower journal.  But on Thursday this week, I found one I'd never noticed before,  the big white Morning-Glory-like bloom in the photo above, called Low (or Erect) Bindweed (Calystegia spithamaea).

I was walking with my friends in the Thursday Naturalists at the Wilton Wildlife Preserve and Park, and we had almost returned to our cars after a full morning's walk through the woods of the park's Fox Parcel when we spied this really large white flower protruding from a general carpet of lupine and dewberry in an open meadow.  It was so large and so stunningly white, we wondered how we could have missed it on our way into the preserve along this same trail. Perhaps, as is true for Morning Glories on days that are gray and threatening rain, the flower had not yet opened when we passed this way three hours before.  But we sure noticed it now!

At first sight, I assumed it was the very common Hedge Bindweed (Calystegia sepium), which usually has pinker flowers but occasionally ones of pure white. But as soon as I saw our flower's leaves, I knew it could not be that.   These leaves were not only of a quite different shape from those of Hedge Bindweed, they were also quite furry, with hairs on both the front and back of the leaves as well as along the short stem.  We also noticed that it was not blooming on a long trailing vine but rather on a shorter, more erect stalk. 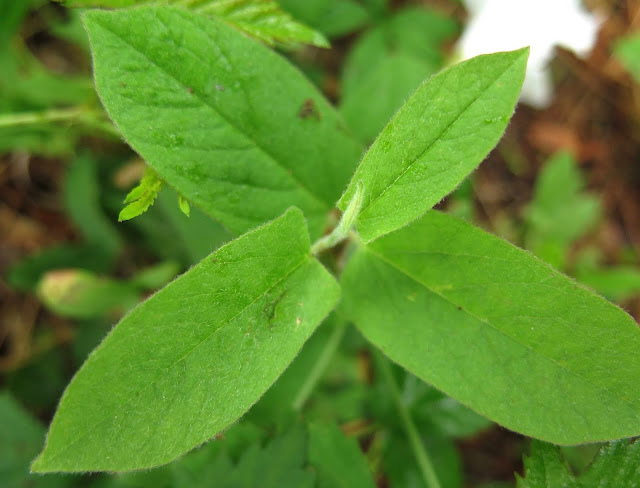 One of our group, Lois Klatt, expertly followed the key in Newcomb's Wildflower Guide to find a perfect match for our flower on page 198.  Low (or Upright) Bindweed it was!  A new one for me, as well as for most of us fellow wildflower enthusiasts in the Thursday Naturalists.  And a native plant, to boot!  Low Bindweed is demonstrably secure in New York, so it is not classified as a rare plant by any measure, but it was still a new one for me.  Hurray!


Just for comparison's sake, here are two very similar flowers we considered at first, the pinkish Hedge Bindweed I mentioned above (also a native plant in New York), and the pure-white Field Bindweed (Convolvulus arvensis), an introduced species.  Both of these plants grow on long vining stems and often entwine other plants, growing so rampantly as to be considered invasive at times. (Low Bindweed has too short a stalk to entwine any other plants.) 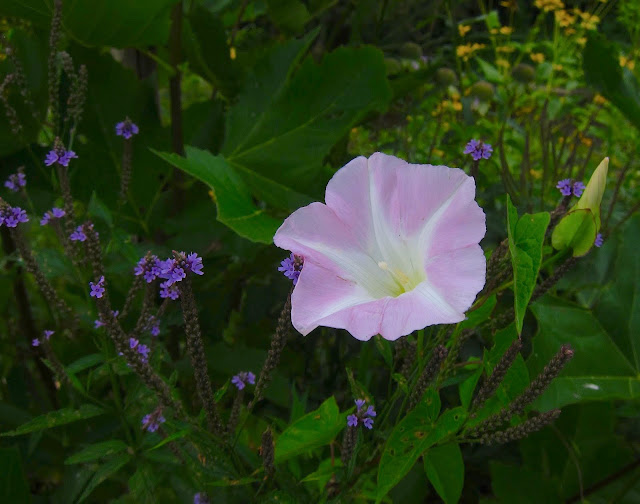 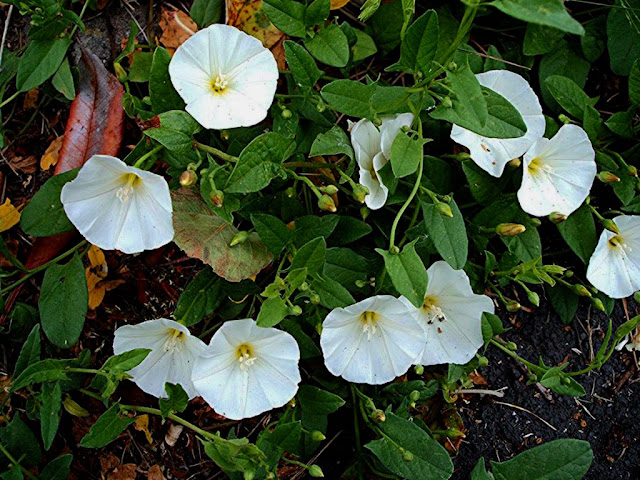 Also for comparison's sake, I show the leaves of these two ostensible look-alikes.  The leaf of Hedge Bindweed, with its tapering point and deep squared-off lobes, is on the left.  That of Field Bindweed, with its more oval shape and sharply pointed flaring lobes, is on the right.  It is such differences that help us find a correct identification for many of the plants we find, especially those with flowers that look so much alike. 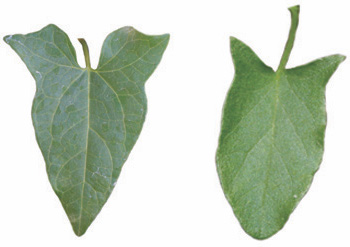 Posted by Jacqueline Donnelly at 12:20 AM