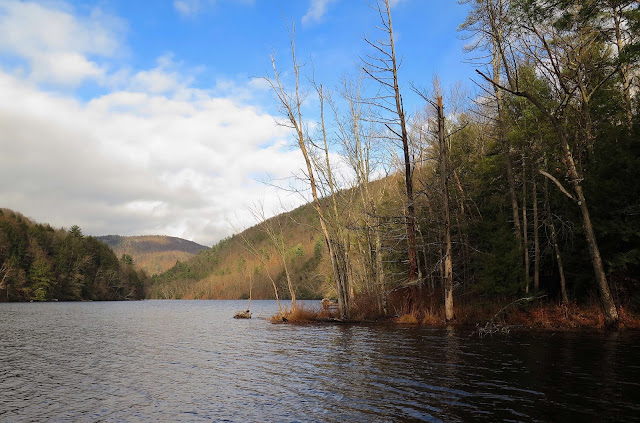 There was actually some sunshine today, and occasional glimpses of pretty blue sky.  And temps rose into the 40s, too! A good day to get outdoors, and what better place to go but over to the Sherman Island Boat Launch on the Hudson River at Moreau.  The new state-park lands that I announced in my last post will adjoin this area (which is already part of the park), so I thought I might walk about these woods and imagine where the trails might start that would take us up into the surrounding mountains.

I set off along the stream that runs into the river here, hoping to find a spot narrow enough for me to jump across and explore the woods on the other side.  But I stopped in my tracks at this sight.  Was that a REAL Great Blue Heron standing there on the bank?  How odd! 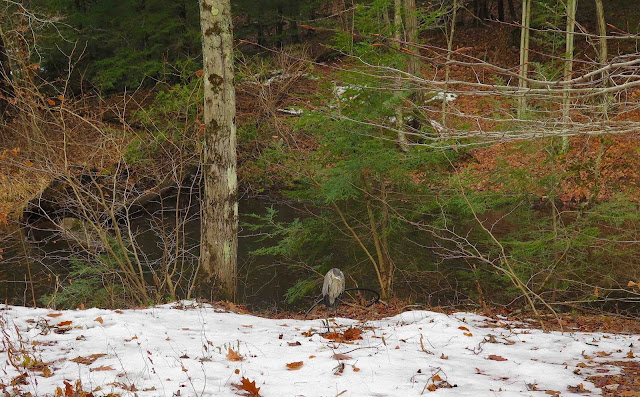 Not wanting to frighten the bird, I stood quietly for a while, observing the heron from behind a tree.  The bird did not move.  Did it know I was here?  Well, of course it did!  I've never in my life been able to sneak up close to a Great Blue Heron before it opened its huge wide wings and flapped away, trailing it legs behind and quickly moving beyond the focal range of my camera.  I decided to edge in closer.  Perhaps its leg was caught in fishing line, and maybe I could release it.

As I approached, the bird turned its head to look at me, but did not move any part of the rest of its body. 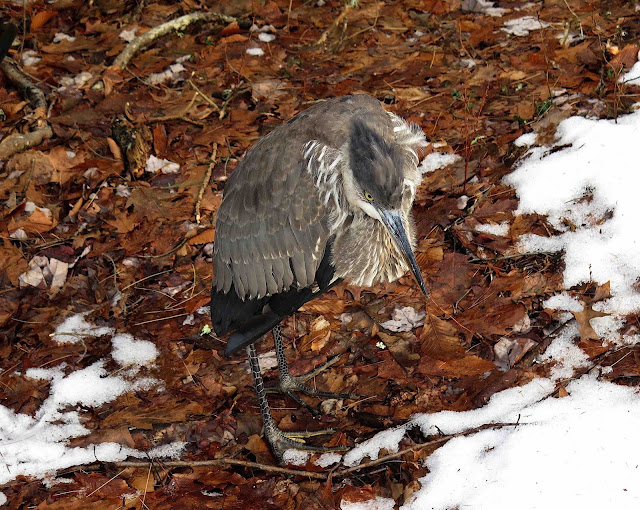 I moved as quietly as I could, hoping not to frighten the bird as I circled it, wanting to examine the situation from all angles. 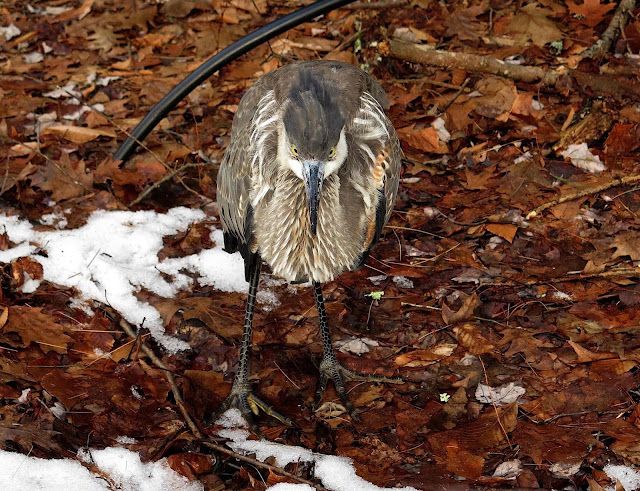 I could see no ensnaring line, nor any obvious injury.  But the bird never budged when I moved in close, except for turning its head to keep at least one yellow eye on me.  This seemed to be very disturbing behavior for a Great Blue Heron.  I decided to report what appeared to me to be an ill or injured bird to the park officials,  so I quickly returned to my car and headed over to the park's main office. 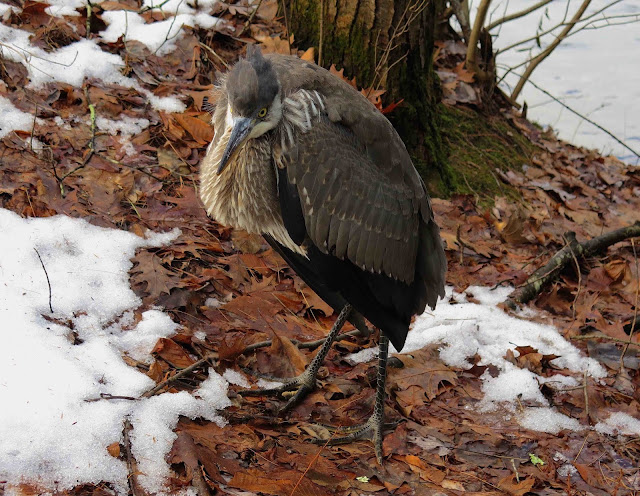 One of the park managers, a man named Al, came back to the site with me and observed the situation for himself.  He then contacted a regional wildlife rehabilitation organization, and he told me the word had gone forth to alert potential rescuers.  Messages had been left, anyway, although not yet responded to by the time I left for home.  So I do not know the fate of this creature or what could have happened to make it behave so strangely.  Herons are fish eaters, so it's possible they can be poisoned by eating fish that have swallowed lead sinkers.  Or maybe it's just an aged bird, come to the end of its life. Whatever the case, I sure hope it does not have to suffer long.  If I learn the bird's fate, I will come back to add a note to this post.

UPDATE:  I called the park office this morning (12/4) to inquire about the heron's status, and I was told that the bird was not there today when park staff went to observe it.  So perhaps the heron was just resting and eventually flew away, or maybe a coyote shared a nice breakfast with its pack.  We'll never know, but at least we know we did what we could to help it.

UPDATE 2:  I sent a photo of this heron to Bob Henke, who writes a wildlife column for the Glens Falls Post Star, asking him what he thought might be wrong with this bird.  He responded thus:  "Probably starvation. 50% of fledglings do not survive to migrate. Many simply never catch on to hunting procedures. Often we see older birds that are too weak to migrate but this one looks like a juvenile.


"On the other hand, there are also several birds that stay on the area all winter. There are some spots that never freeze over so they can hunt all winter and avoid the energy costs of migrating.

Poor heron. Thank you for doing the right thing. Your adventures are always a source of interest and learning for me.

Do they migrate south for the winter?

We have had some weird experiences with oddly tame herons as well. One landed within approx. 4 feet of me a couple weeks ago and proceeded to calmly fish. Strange.

Such is life in the natural world -- beside the abundant toxic materials humans have unleashed, there are a myriad of naturally-occurring poisons, diseases, parasites and accidents that befall wildlife. Predators frequently bring an end to these animals.