B-r-r-r, but it has been COLD!  Temps have fallen well below zero for several nights in a row, then remaining down in the single digits even on the sunniest days, like today.  Despite that radiant blue sky and beautiful dusting of fluffy new snow,  I almost talked myself into staying indoors today.  But then I remembered that I have a reputation to uphold, of braving even the coldest days without trepidation.  Plus, the sun was bright and the wind was calm, and I have plenty of winter clothing just made for days as cold as this.   So off I went to walk around Moreau Lake. 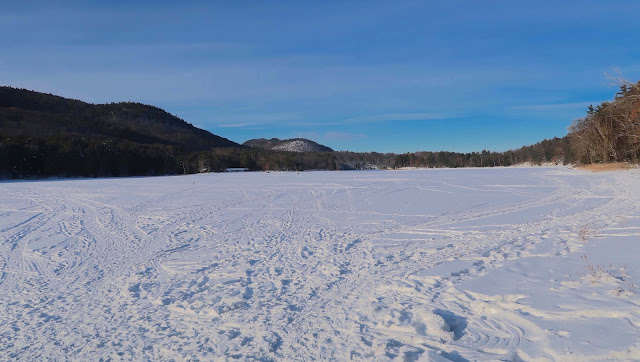 It was obvious, from all the foot tracks covering the lake, that plenty of folks beside me have been daring the cold out here, although I didn't see many of them today.  I stopped to talk to a couple of guys who'd been fishing through the ice all day, so far without much luck.  I don't know how they do it, standing out here on the ice, exposed to the cold for hours and hours, and not seeming to mind that they hadn't yet hauled out a fish.  They actually seemed quite cheerful, happy to chat with a visitor for a while.

Not everyone I met today was cheerful, though.  The first fellow I met was cradling his mangled little West Highland Terrier, while telling a sheriff's deputy about how the poor little dog had been viciously attacked by two Golden Retrievers, dogs that had been running off the leash.  Moreau Lake State Park, as do all state parks, has a policy that all dogs must be leashed at all times, a regulation that many dog walkers, unfortunately, rarely observe.

As I continued my walk around the lake, I encountered another dog walker whose two dogs were running free, and I thought I would do him the favor of warning him that the sheriff had been called to the park because of the injured-dog incident, and so he had best put his dogs on a leash before the sheriff caught them.  Oh boy, you'd think I had slandered his mother!  Who was I to tell him to leash his dogs?!  OK, I'll let the sheriff tell you, I said, and he only scoffed:  "I used to be one of them.  They'll give me a pass."  And he walked away, dogs still running free, and tossing this comment back over his shoulder at me:  "You must be a Hillary voter."  And again:  "If I was a black guy, you'd never have approached me."  Both comments flung at me as if they were the worst insults he could think of.  Well, I never waste my time arguing with surly bastards, so I didn't bother to tell him I'd voted for Bernie, or that my own grandchildren were half-black: two factors that would have made me even worse in this belligerent Trumpster's opinion.  Deciding to not waste any emotion on this ridiculous encounter,  I continued around the lake, eager to let nature's beauty wipe that fellow's ugliness from my mind.


By the time I reached the back bay of the lake, the sun was sinking low, casting long blue shadows across the frozen expanse. 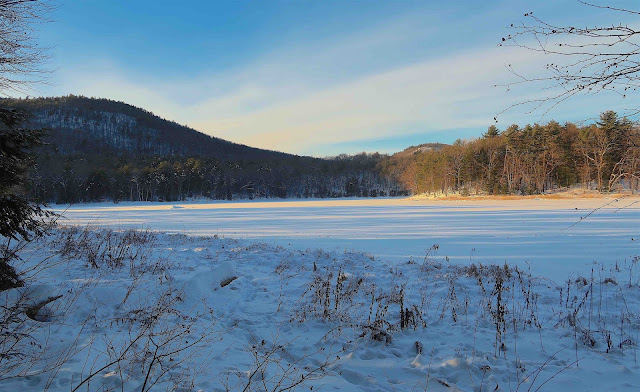 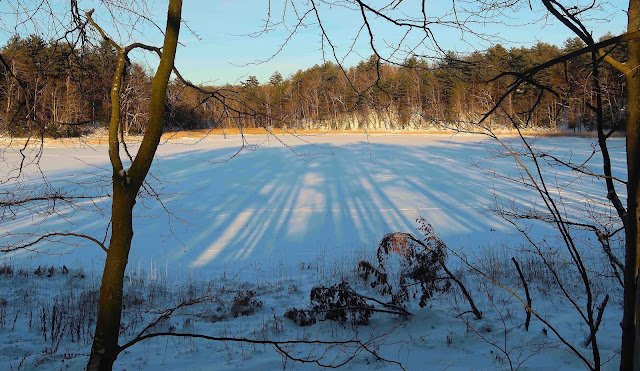 The longer those shadows grow, the colder the temperature falls.  It was time to pick up my pace toward home, stopping off in the park's warming hut to thaw out my face by the roaring fire.  What a great addition this hut has made for enhancing winter hiking at Moreau Lake State Park. 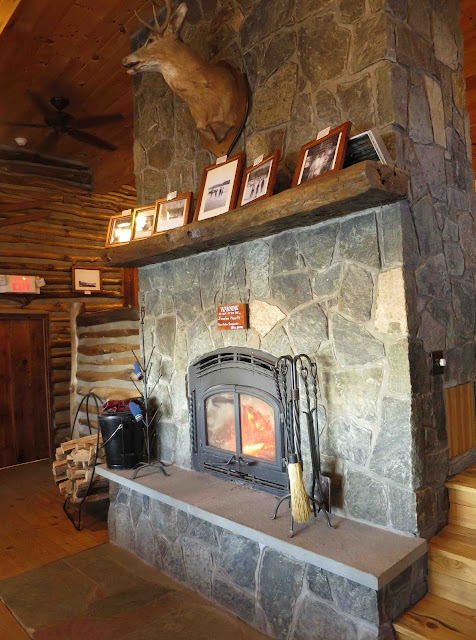 I got a brand-new camera for Christmas, a Canon Powershot G7 X Mark II, and I was hoping to find some pretty things to test out its macro function, but not much suitable material presented itself to me today.  I did think this leftover Wild Mint plant was gracefully interesting, even if it presented little challenge to my new camera. 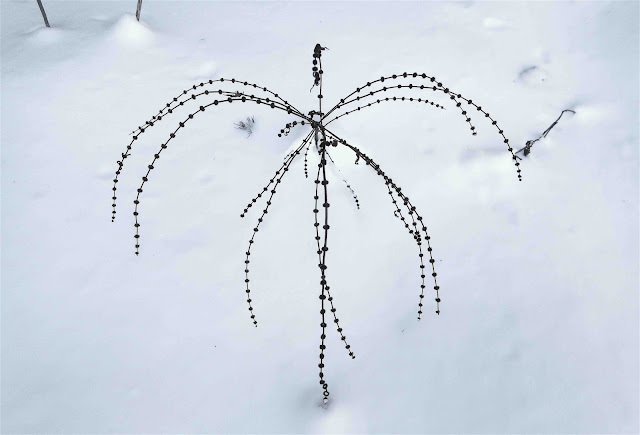 My old camera has a setting just to diminish the blue cast in photos of snow, but my new camera doesn't have that setting.  I have to adjust the color in my computer program instead.  Even when I do, the blue predominates.  I have lots to learn about what my new camera can do. Meanwhile, it did manage to capture the tracks that a little mouse made as it hopped along a trough in the snow beneath a fallen tree.  This log, I imagine, provides sure protection from swooping owls. 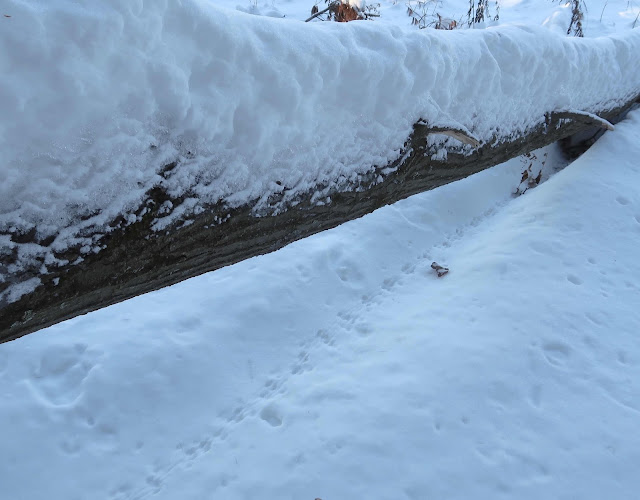 I sure wish the park's dog-leashing regulation had protected that little Westie from being attacked by Retrievers.
Posted by Jacqueline Donnelly at 8:44 PM

Glad you've got that reputation to uphold! As for dog owners - such an arrogant bunch sometimes. Hope 2018 is good to you.

I gues you won't be offering advise from now on.Just trying to be helpful

As the old saying goes - "Dogs are like string - every yoyo wants one." I love dogs, but dog owners not so much.
Have a truly wonderful year ahead as you go out and about and tell us of all the wonderful things you see.

I disagree. To be trapped in isolation is not a healthy existence. Even with the risk of exposing belligerents. Also you may want to consider proof reading. It may make others take your comments seriously.

Ugh... I'm so sorry you had to deal with that nasty person! They could've just as easily saved their breath and thanked you, regardless of whether or not they intended to heed your warning. Why put so much venom out into the world?

My oldest daughter is quite timid when it comes to dogs so I'm less than thrilled when we're out someplace with clearly posted leash laws and an off-leash dog bounds directly towards her (they always seem to know who is the most fearful). Yes, your dog may be a sweetheart who'd never hurt anyone, but we don't know that. You're putting your dog at risk just as much as others in the park.

What a shame to have an already chilly walk ruined by an individual of that sort. You were doing him a favor! So sorry for the poor little pup that got mangled.

Having been bitten in the distant past, my tolerance for off-leash dogs that approach is really low. I always carry a walking stick and/or pepper spray and, unfortunately, have had to use both on loose dogs. As has been said before, it's not the dogs as much as it is the owners who don't know how to train their dogs or don't want to inhibit "Dear Fluffy" as it runs free and "just wants to be friendly".

The jerk you met is, sadly, becoming all too common as the occupant of the White House models that kind of behavior. Too bad his parents didn't train him any better than most people train their dogs.

Thank you, my friends, for your supportive comments regarding this unpleasant encounter. I do love dogs and I completely understand why dog lovers delight in having their dogs happily run free. That's why I support the creation of dog parks where they can do just that. But that poor little mangled Westie was an example of why this park has leash laws. Regarding that belligerent scoffer, I was truly taken aback by the vehemence of his hostility. Of course, my first impulse was a defensive anger, but then I considered that this fellow must spend his life stewing in such vitriol, and I actually felt sorry for him. That old adage about sticks and stones, etc., helps to diffuse the anger.