What an amazing transformation, over the past few weeks!  When I last visited the Ballston Creek Preserve toward the end of March, I had to wear snowshoes to make it through deep snow.  But today, with temperatures well into the 70s and accompanied by my good pal Sue, we walked through the woods in shirtsleeves, kicking up sun-warmed dry leaves as we went. 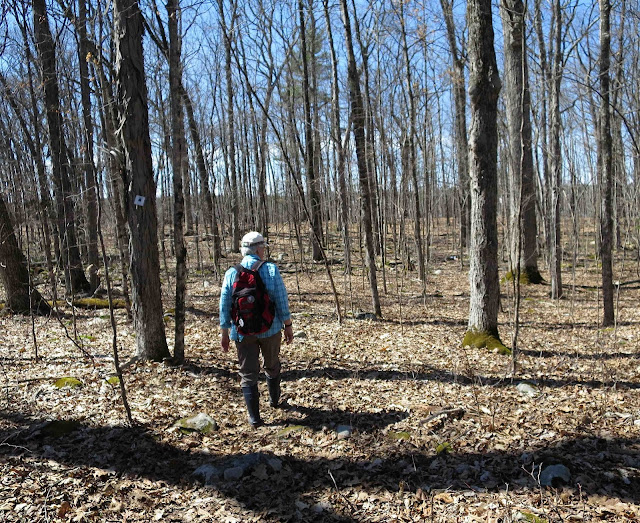 We were on our way to visit the heronry, which we'd heard was newly reoccupied by returning numbers of Great Blue Herons, but first, loud croaking from vernal pools drew us off the trail to investigate the source of that sound.  Sure enough, the Wood Frogs were roiling the pools with their amorous activities.  Of course, they fell silent as we approached, but we could still spy a few floating in the green water. 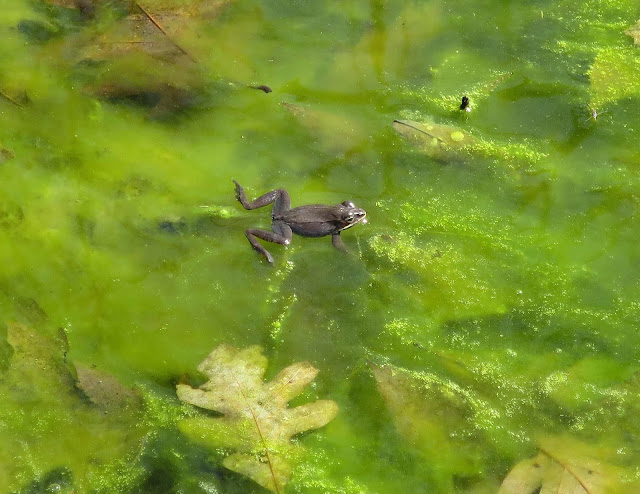 Last time I was here, these pools were silent and covered with snow-heaped ice.


Yes, indeed, the herons were back and busy at restoring the nests they had occupied last year. Solitary sentries guarded the few nests that remained after spring gales had torn many other nests from surrounding snags.  There were no signs at all of the osprey and owl pairs that once shared this nesting site, and we wondered if other herons would soon return to rebuild the nests that had been destroyed. 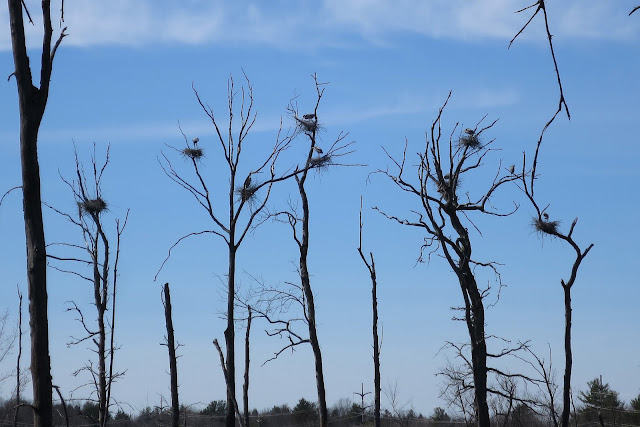 Here was another sign of spring, one I found just yesterday in a most unexpected site:  masses of the tiny Mustard-family plant called Draba verna were carpeting a strip of poor soil along the perimeter road of the Wilton Mall.  The flowers are way too tiny to be noticed by anyone but a wildflower-obsessed nature nut like me, desperately searching for the smallest signs that the winter is over and done. 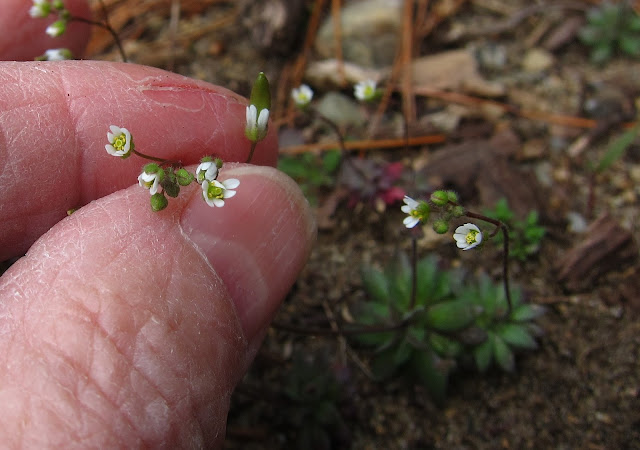 Whenever I find this miniature early bloomer, I recall the naturalist Aldo Leopold's wonderful words in praise of this little no-account weed in A Sand County Almanac:

"Within a few weeks now Draba, the smallest flower that blows, will sprinkle every sandy place with small blooms.  He who hopes for spring with upturned eye never sees so small a thing as Draba.  He who despairs of spring with downcast eye steps on it, unknowing.  He who searches for spring with his knees in the mud finds it, in abundance. . . .

"Draba plucks no heartstrings.  Its perfume, if there is any, is lost in the gusty winds.  Its color is plain white.  Its leaves wear a sensible woolly coat.  Nothing eats it; it is too small.  No poets sing of it.  Some botanist once gave it a Latin name, and then forgot it.  Altogether it is of no importance -- just a small creature that does a small job quickly and well."
Posted by Jacqueline Donnelly at 12:00 AM

My photo from yesterday

Those are some pretty incredible heron photos, Jeff! Thanks for the link to your wonderful site.