The sign said No Trespassing, Prison Property, but I knew that wasn't true.  The woods along Corinth Mountain Road now belong to Moreau Lake State Park, so I figured I wouldn't get shot by prison guards if I slipped through a gate and followed an old service road through the woods.  I was looking for the Lake Bonita I could see on the map but had never laid eyes on in person.  The park will eventually lay and mark trails to the lake through this recently acquired property, but my accident this year taught me that I can't always count on the future, so I set off to find that lake on my own while I still have the strength to do it.

My guess is that there's been a road here for a long, long time, since I found these old cellar holes deep in the woods.  I always wonder what stories they could tell about the folks who once lived above them. 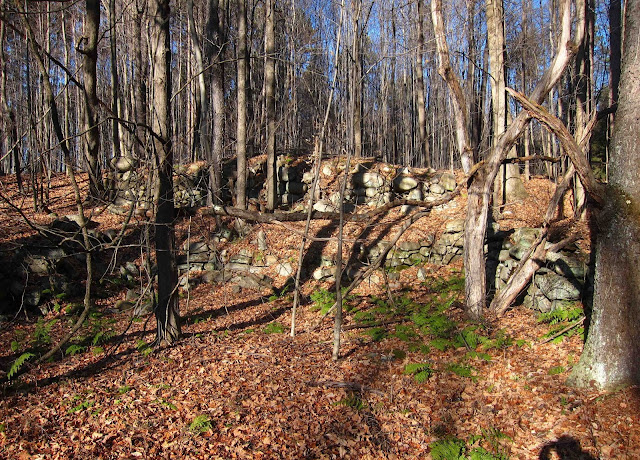 It sure was a glorious day for a walk in the woods today, with a clear blue sky and mild temperatures edging toward 50 degrees.  I doesn't seem right to have such warm weather here in December, but hey, I'll take it as long as it's given to me.  The wide unrutted road offered easy footing for me with my bum leg, and it wasn't long before I could spy glimpses of bright blue through the trees, indicating the lake was nearby. 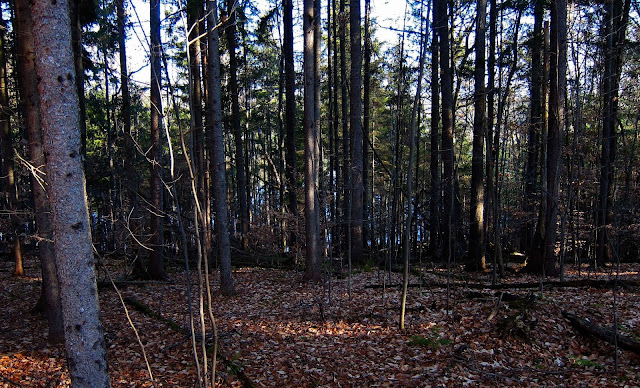 I left the road and scrambled down some steep banks until I came out of the woods on the shore of this gem of a lake, gleaming sapphire-blue beneath a cloudless sky.  I'd love to carry my canoe down here and paddle out to those little islands.  It looks like they're covered with blueberry bushes and maybe a  bog plant or two. 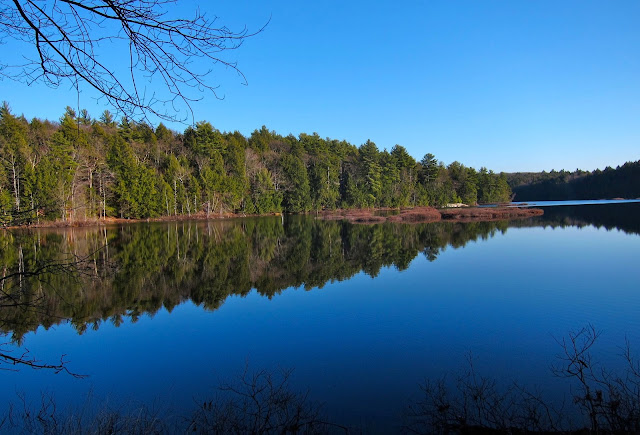 Returning to the road, I followed it around the end of the lake, where it stopped at the dam that holds back the water that forms the lake. 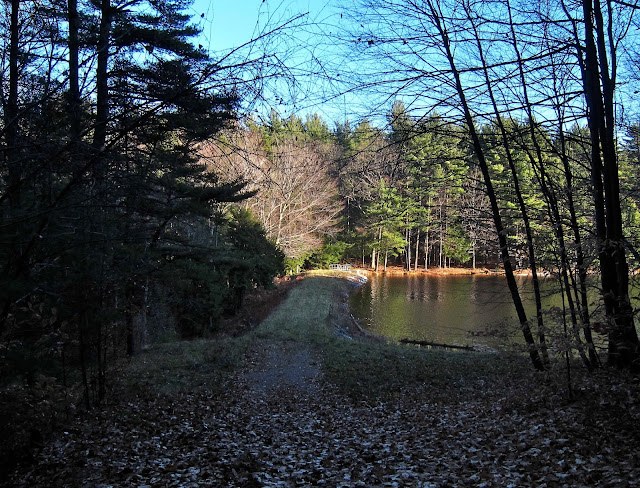 The dam was releasing some of the lake water into a little stream, which I followed downhill, enjoying the splash and tumble of little waterfalls along the stream's course. 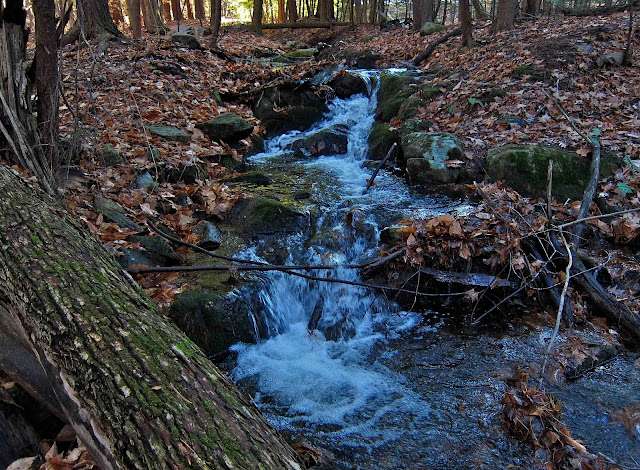 I could have lingered much longer along that lively stream or detoured into adjacent wetlands for some botanical explorations, but gosh, that sun goes down early these December afternoons! Time to head home before dark.   Perhaps by the time Daylight Savings Time begins again, I won't have to feel like I'm trespassing to return to this pretty little lake, but will be able to walk official trails to find it. 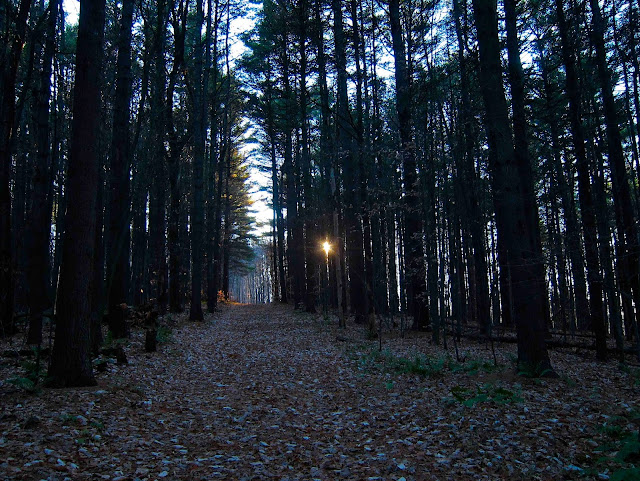 Posted by Jacqueline Donnelly at 10:49 PM

You are so adventures especially with a bad knee. I love trotting along with you looking at such beautiful scenery. Happy Holidays

What a beautiful find! You're helping inspire me to get out in the woods more on a "bum" ankle. I also have that feeling of lets explore while everything is (mostly) working.

Oh, how wonderful to find that fine little lake! We had the same experience with the short day yesterday. The sun sure does go down quickly these days. I love old cellar holes too, when you come upon them all grown over in the woods. What fascinating stories they might tell if they could talk.

Great little adventure! The sun gets low so early i find you need to be out in mid-day to get pictures.

My family used to own a wood lot on the south side of the road so I've spent time wandering there. Have you seen the old railroad/trolley line grade that snakes thru the woods? What's interesting is how much water there is along the top of the McGregor Ridge - little boggy areas that feed seasonal streams running off either side. I believe the fault scarp on the east side of the range is the same one that channels Saratoga's mineral springs - maybe it brings ground water up here as well. Before the prison the facilities were a developmentally disabled center. I used to volunteer there and recall a nice pond amongst the buildings.
Remember that Tuesday, December 8 is the earliest sunset of the year so we'll start having a few extra minutes of afternoon light after that.

Jackie, your reference to "cellar holes" makes me think of one of my favorite poems, Richard Wilbur's


In the Elegy Season


Haze, char, and the weather of All Souls’:
A giant absence mopes upon the trees:
Leaves cast in casual potpourris
Whisper their scents from pits and cellar-holes.

Or brewed in gulleys, steeped in wells, they spend
In chilly steam their last aromas, yield
From shallow hells a revenance of field
And orchard air. And now the envious mind

Which could not hold the summer in my head
While bounded by that blazing circumstance
Parades these barrens in a golden trance,
Remembering the wealthy season dead,

And by an autumn inspiration makes
A summer all its own. Green boughs arise
Through all the boundless backward of the eyes,
And the soul bathes in warm conceptual lakes.

Less proud than this, my body leans an ear
Past cold and colder weather after wings’
Soft commotion, the sudden race of springs,
The goddess’ tread heard on the dayward stair,

Longs for the brush of the freighted air, for smells
Of grass and cordial lilac, for the sight
Of green leaves building into the light
And azure water hoisting out of wells.

Thanks for coming along with me on this adventure, my friends. I do feel your presence each time I go exploring.

Don Butler, I haven't found that old train line, but since you've alerted me, I'll be on the lookout for it. I do come across swampy areas up in the Palmertown Mountains here, including one where some very old Black Tupelos grow, and another pond just chock full of Wild Calla.

I wish I knew your name, Unknown, so I could thank you personally for this exquisite poem by Richard Wilbur, so evocative, so full of sensations. And so appropriate to the image of a cellar hole that I posted. Thank you.