The doctor tells me my knee surgery went well, but my knee itself is telling me YIKES!!!  Yeah, it hurts pretty bad right now, so I'm mostly lying around in a pain-med daze, not eager to get back outdoors as yet.  But yesterday, the folks at Facebook posted a photo I'd shared on Facebook five years ago, a photo of the banks of the Hudson River in full glorious autumn color (see below). "Wow!" I thought, "I'd better get over there right now if I don't want to miss this year's show."  And bless my dear husband's heart, he took me there, to where the Hudson takes a sharp bend, just above the Spier Falls Dam at Moreau. (I can't drive myself as yet.) 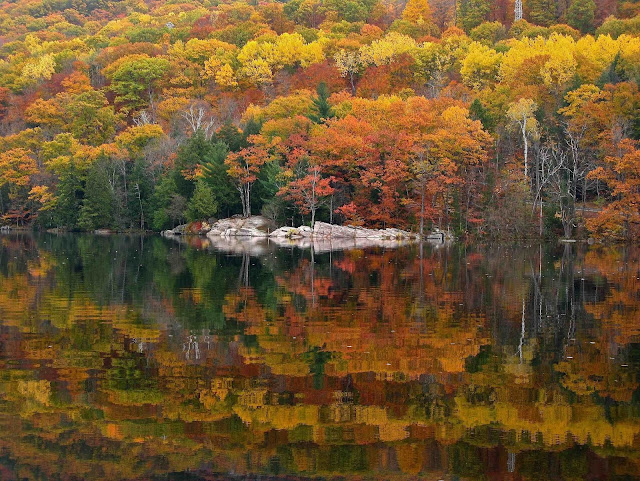 Five years later (see below), the scene looks pretty much the same, despite a few differences.  More sunlight and shadow today instead of the bright overcast of the day I took the original shot, and the foliage colors are not as brilliantly yellow this year.  Also, I now use a Canon Powershot S95, while I took the original photo with a Canon Powershot G7, which did focus better in zoom. But I didn't want to zoom in today, desiring to capture all that expanse of radiant blue of the sky and reflecting water.  What a thrill it was to stand on the river bank and just gaze at all this splendor!  And to see how all of this beauty has remained the same, unchanged for the past five years. 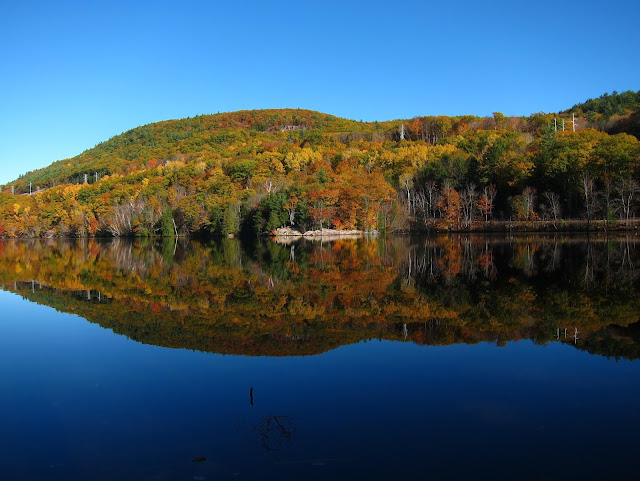 Before we went home, I wanted to visit another favorite spot along these banks, this one a mile or so below the dam.  Ah, yes!  As beautiful as ever! 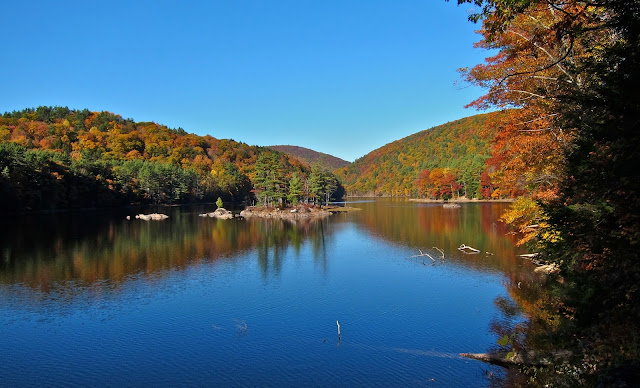 Posted by Jacqueline Donnelly at 8:59 PM

Swam from those rocks many times, paddled up the river towards Corinth, hiked up to the ledge on the hill to boulder (back then) and laze in the sun (recently) and skied along the ridgeline in good snow years. Thanks for the memories. We are so lucky to have such a treasure close by. Hope you're feeling better soon so you can get out and enjoy.

Both pictures are awesome! Sorry about your knee though!

Lovely photos and stories! Much appreciated! Prayers for continued recovery!