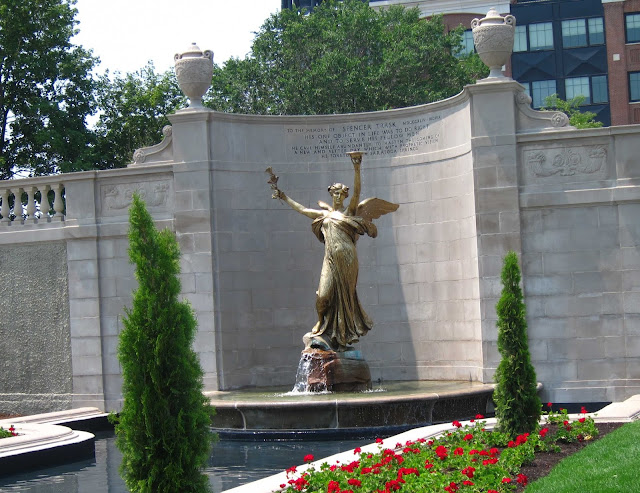 The Spirit of Life, dedicated to the memory of philanthropist Spencer Trask, is the
only monument among many others in Congress Park NOT honoring warriors or war.
Today brought another lovely summer morning, and to top it off, my knee felt strong and pain-free enough to allow me to walk all the way to St. Peter's Church, passing through the beautifully landscaped Congress Park in downtown Saratoga Springs to do so.  This is a huge tourist weekend in Saratoga, featuring a famous horse race (the Travers) and an even more famous Triple-Crown winning horse, American Pharoah [sic], who, despite all odds, was out-raced by a 16-1 longshot  named Keen Ice in the very last seconds of the race.  I'm really not that interested in horse racing, but I admit it was thrilling, to see that winning horse just pour on the power and overtake a magnificent horse that no one thought would ever be beaten.

Because of this race, Saratoga is full to bursting with visitors today, and many of them were enjoying the pleasures of Congress Park today, strolling under the huge old shade trees, tasting the waters from several mineral springs, observing the antics of ducks in the quiet ponds, and marveling at the spectacular gardens surrounding the many monuments throughout the park.  As I strode along, assisted by my cane, I was struck (and not for the first time) by the fact that all but one of those many monuments was built to honor warriors or war.

Except for the glorious Spirit of Life, honoring the late 19th-Century philanthropist Spencer Trask, there is not a single monument dedicated to healers or peacemakers or human-rights workers or those whose prophetic voices were raised to resist the horrors of war.  ALL of the other monuments were raised to honor those who were willing to participate in the death and destruction of warfare.  All of them.

By pointing this out, I certainly do not mean to dishonor those brave men and women who gave their lives in what they believed was the defense of their nation, although I cannot recall a single war in my memory that had anything to do with defending our nation.  Even many of those who once promoted such misadventures as the Vietnam War or the Iraq War now admit that those wars were wrong, but that doesn't belie the bravery and sacrifice of those who were sent to fight them.  And those soldiers certainly deserve to be honored, preferably by support for their widows and orphans or by continuing care for those who were wounded.  And yes, by monuments, too.

But I just wonder what there is about our culture that cannot bring itself to honor peacemakers and healers at least as much as it honors those who consent to participate in war.


Posted by Jacqueline Donnelly at 3:20 PM

You made me stop and think, but I'm wondering if there's a difference here in Canada. First four monuments I thought of were to a Women's Institute, to an old now-gone church, to Black History in Owen Sound, and to an award-winning cow!

Yes, Furry, big difference between what gets honored in Canada. Could it be because Canada has not sent its armies around the world, as the US has, to invade and interfere in other nations? Thousands and thousands of US soldiers have died in these misadventures (not to mention, of course, the HUNDREDS of thousands of innocent non-combatants), so all these monuments to their sacrifices are some kind of attempt to mollify their survivors and convince them their loved ones did not die in vain.

Thanks for your comment, catharus. I know that not many Americans share my sentiments regarding the sinfulness and futility of war, but I very much appreciate knowing that you do.

Thank you for your observations and comments on the monumental glorification of war. Well put and very welcomed at this moment when the Iran Nuclear Deal / Arrangement is teetering. The weekend of September 19 / 20 your city will be celebrating Peace Month with a Peace Fair. I will be there with the Walkabout Clearwater Chorus singing for Peace. Perhaps you can get to the Fair?

What if, those warriors were fighting to end death and destruction, and bring about peace?

Your concerns are misplaced, and display a lack of understanding of why war heroes are memorialized.

I do agree with you, Anonymous, that it is possible to defend a "just war" in very rare circumstances. But war, with its widespread death and destruction of innocent life, is ALWAYS evil, even if some might consider it the lesser evil. I do believe, however, that all the wars since WWII have brought about greater evil than what they were fought to correct. They certainly did nothing to "end death and destruction and bring about peace," as you might claim. No war has ever ended evil, and no war ever will. That doesn't mean that there were no heroic actions occurring during warfare. Of course there were, and those heroes deserve to be honored. But so do those who resisted resorting to warfare in the first place, most of whom have been proven to be correct in their objections to military involvement.