Rain, rain, rain!  If I had to be laid up with a broken knee, this June has been a good month for it, with rain almost every day, including most of today.  But this evening it cleared as the sun went down, and I stepped outside to take the cool evening air, walking to the corner to gaze at the starry sky.  And there they were!  Venus and Jupiter, almost touching!  I'd heard about this planetary event some days ago and had quite forgotten about it until I raised my eyes to the brilliant glow of Venus in the western sky and noticed the dull red dot of Jupiter right above her, so close I could cover the sight of both planets with just one fingernail. 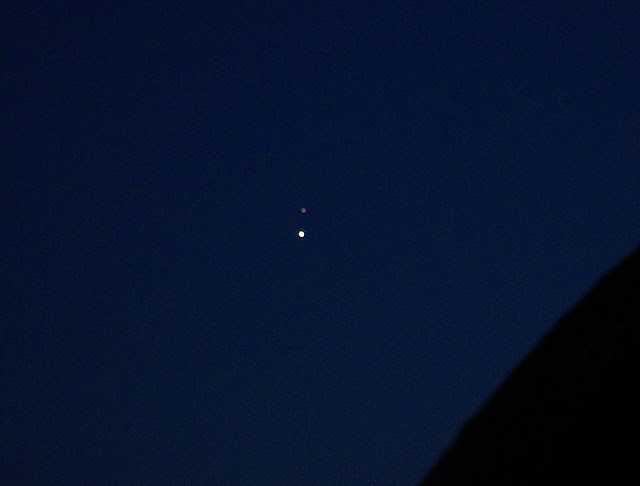 After checking several astronomy sites on the web, I learned that this is the closest -- and the last -- pairing of these two planets in the current 24-year cycle, appearing to us on Earth to be but one-third of a degree apart.  Although Venus is much smaller than Jupiter, because of their relative distance from earth, Venus appears much brighter than Jupiter, shining with a - 4.5 magnitude, compared with Jupiter's -1.8 magnitude.

I'm so glad I stepped outside and didn't miss the show!

A beautiful big round moon was also shining out of the eastern sky, playing hide-and-seek with wisps of clouds that moved across the moon's pearly face, but never completely obscuring its lovely light.  Although it looked very full to me, the moon will not officially be full until tomorrow night, July 1, at 10:20 pm. 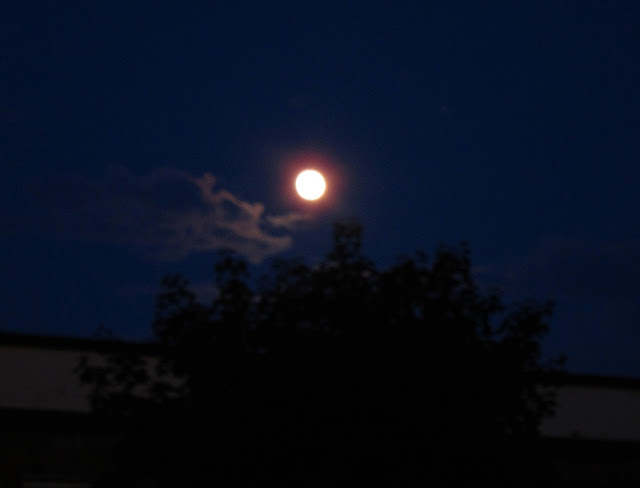 Posted by Jacqueline Donnelly at 10:30 PM

Too much rain and too many clouds here!

Too many clouds here too (SE Michigan), very disappointing!