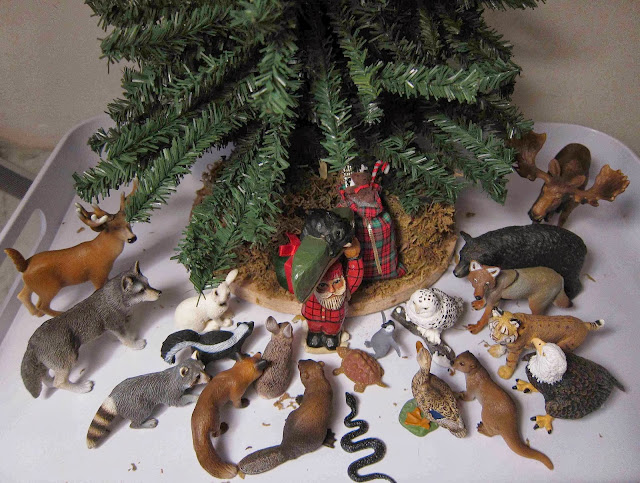 Each year at this time, I set up a little shrine to dear Santa and gather around him all the woodland creatures who live in the North Woods -- or at least as many creatures as I can find models of.  Of course, many of these creatures would be hibernating at Christmas time or would surely be prey for the predators among them, but we trust that Santa's love for them has cast its spell of warmth and peaceableness over them, so all would be safe and well. Since I last posted this scene on my blog two years ago, he's acquired a few new friends: otter, skunk, beaver, snowshoe hare, cottontail rabbit, bobcat, snowy owl, bald eagle, and (highly improbably!) one tiny little penguin, who must have hitched a ride on Santa's sleigh as it passed over the South Pole.   The penguin and the rabbit and the Mallard hen were all gifts this year from our friend Jennifer, who also gave me the canoe-toting Santa many years ago, when she lived next door to us and saw me toting my canoe to the river almost daily.  So this is a shrine to friendship, as well as to Santa-the-spirit-of-giving and also to all the woodland creatures who represent the amazing diversity of life on our fragile planet. 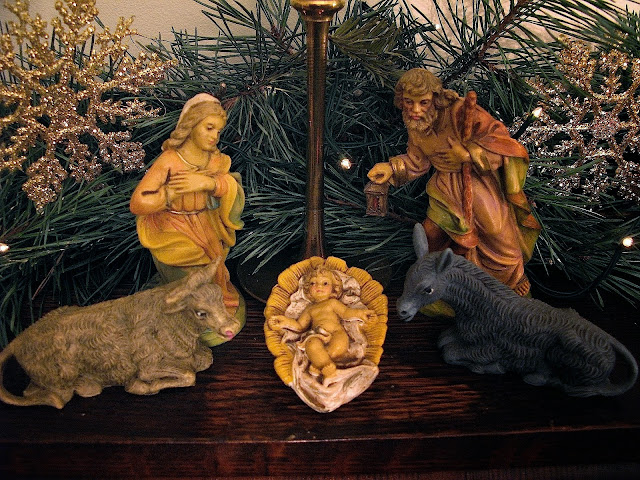 
Yes, Virginia, There Really WAS a Baby Jesus

Christmas Eve. The time has arrived to deck the halls and light the lights and arrange the creche sets in their places of honor. What a beautiful story they tell, even to those who cannot believe that Jesus was divine, or even to those Christians (like me) who turn to these infancy narratives more for their symbolic truth than for any historical fact. 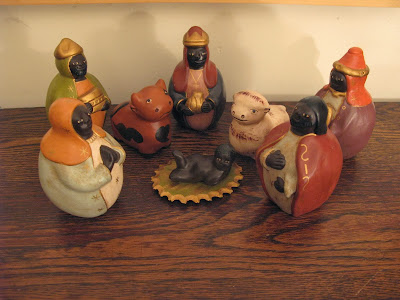 As I said before, it's a wonderful story -- even better, I think, than the one about Santa Claus, the Santa that one little girl named Virginia was once reassured was real. Well, I love the story about Santa, too. So I have a little shrine set up for him as well -- albeit with a few accretions that reflect my own heart's desires: note his lightweight canoe and abundant woodland friends.
* * *
May the peace and love that we celebrate in these Christmas stories be with you and yours not only at Christmas, but all through the year.
Posted by Jacqueline Donnelly at 3:42 PM

Thank you, Jackie. For this special post and for all the others. Beautiful pictures and beautiful words. I wish you a blessed Christmas and a paddle filled New Year.

We just set up the creche sets you gave the girls when they were younger. So special. Cnat wait to see you for my Christmas hug. xoxo

Merry Christmas to you and your family !

I love the shrine. Merry Christmas!