The "Undead" in the Autumn Woods 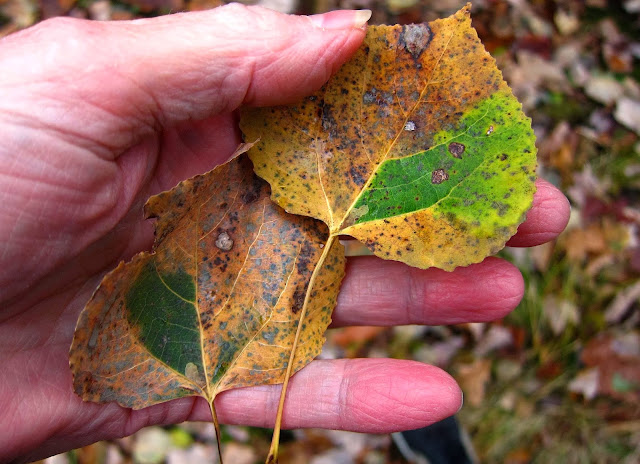 While exploring the Woodcock Preserve in Clifton Park last week with my friends in the Thursday Naturalists, we kept seeing these Quaking Aspen leaves with distinctive green patches all over the forest floor.  Once our attention was drawn to this phenomenon, we noticed it on almost every single shed Quaking Aspen leaf we saw.  We also noticed a small brown spot at the base of each green patch.  What on earth is happening here?

Well, one of the great pleasures of walking with these extremely knowledgeable folks is that someone is almost always certain to know the answer to every nature question.  I can't remember now exactly who it was that gave us the answer, but the gist of it was something like this:  there's a tiny critter inhabiting the leaf that manages to prevent the chlorophyll from withdrawing from parts of the leaf, thus keeping the leaf tissue alive for the critter to continue feeding on it.  Now, isn't that the most amazing thing? 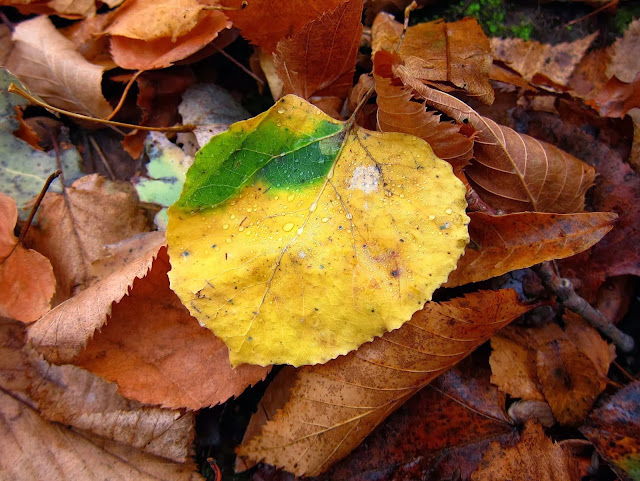 Our friend wasn't quite sure what the mechanism was for achieving this effect,  so when I got home I searched around on the internet and found the answer here, where a fellow named Bryan Pfeiffer explains what causes these "zombie undead aspen leaves."  If you go to his site you will see a photo of the miniscule moth caterpillar that resides in a tiny pocket of tissue at the base of the green patch, secreting a substance that prevents the leaf tissue from dying.   Pfeiffer also has a photo of the adult moth, a creature so small and well camouflaged we are never likely to see it out in the woods.  But we sure are likely to see the results of its larva at work, as any walk in an aspen woods this week would certainly prove.  "Zombie undead leaves."  That's a good one.  Especially considering we found them on Halloween!

We encountered another organism at the Woodcock Preserve that could also fit the category "Undead," on a twig that was covered with the white fluted cups of the Split-gill Fungus (Schizophyllum commune).  Aside from being a ghostly white, this fungus has another "spooky" characteristic, that of being able to dry up completely, to the point where it's only a shriveled husk, and then rehydrate with every subsequent rainfall to keep functioning sexually again and again. 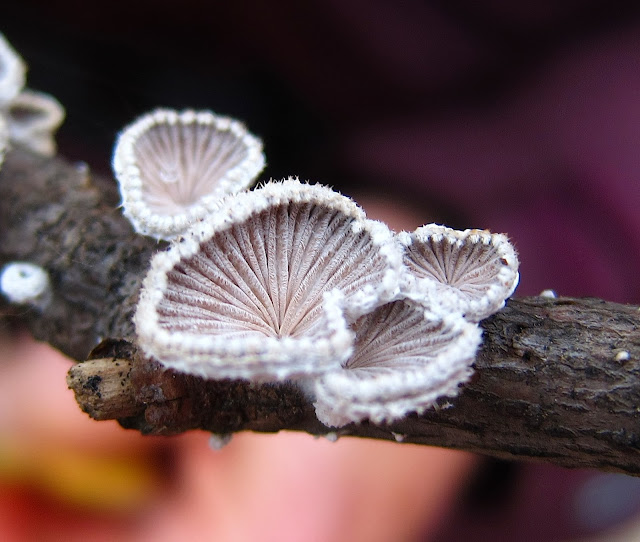 According to mycologists, this fungus has a number of amazing properties, including the fact that it has not just two, but at least 28,000 different sexes.  Don't ask ME how that works, but you could go to this website here to have a fellow named Tom Volk describe the complex process.


Posted by Jacqueline Donnelly at 8:58 PM

Very interesting. I'll have to watch for this in SE MI. And thanks for the additional links in the post!

Love the Undead Zombie leaves...and that fungus is beautiful!

Hi Furry and Ron and Ellen. It always makes me smile to know you've stopped by to see me. Thanks for your comments.