The temperature will be falling fast this week, with even a threat of snow by Wednesday night.  I can hardly complain, we've had such a balmy stretch the whole month of October, including a warm and pleasant day today.  It was perfect for a walk around Mud Pond, to catch the remnants of autumn's glory as the colors start to fade. 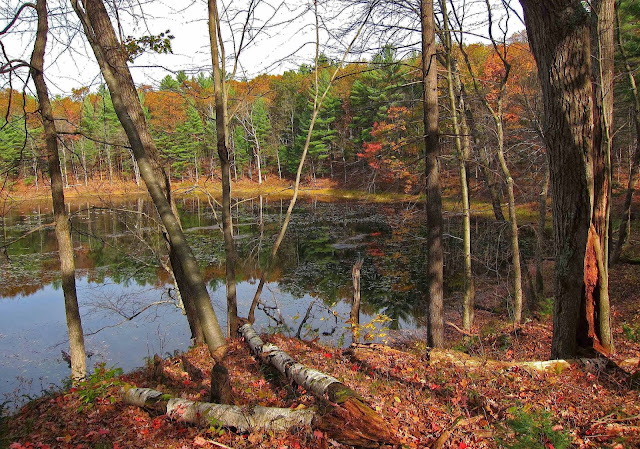 God bless the beeches for holding their golden and copper leaves when all other broad-leaved trees are fading fast toward Novemberish brown. 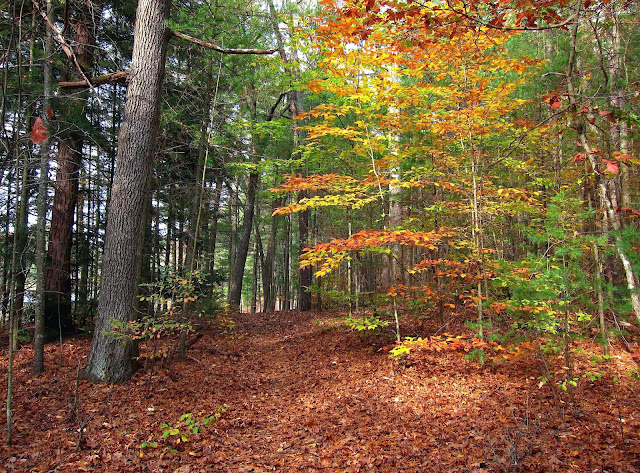 But the duller the big oaks and maples grow, the more vibrant glows the Maple-leaved Viburnum, lighting up the forest floor with flaming color.  Especially when backlit by the sun. 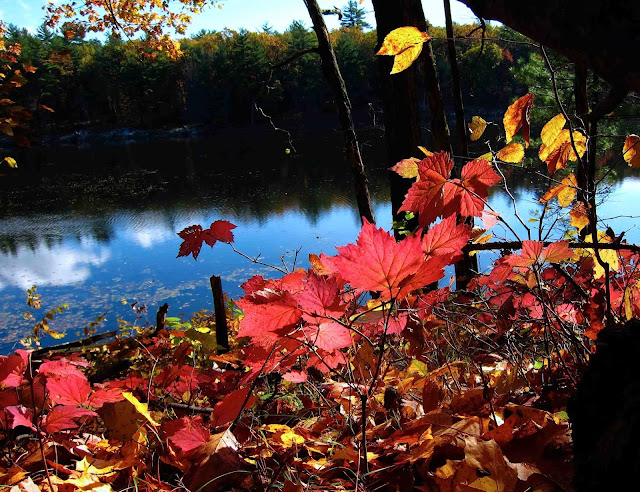 Out on the mudflats, the fat little seedheads of Ditch Stonecrop had turned the prettiest rose, far more colorful than their greenish-yellow flowers had ever been. 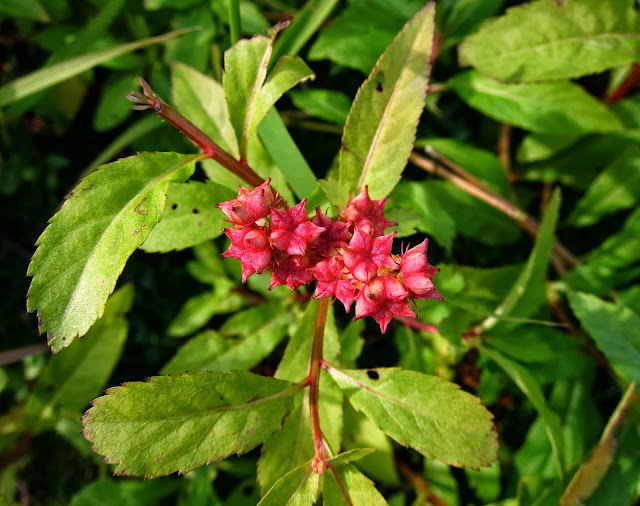 Under the powerlines that run along the north shore of the pond,  American Hazelnut shrubs are rebounding with vigorous new growth, after having been sprayed with herbicides last year.  Is it only young branches that turn so intensely red?  I can't remember ever seeing such colorful shrubs at this site. 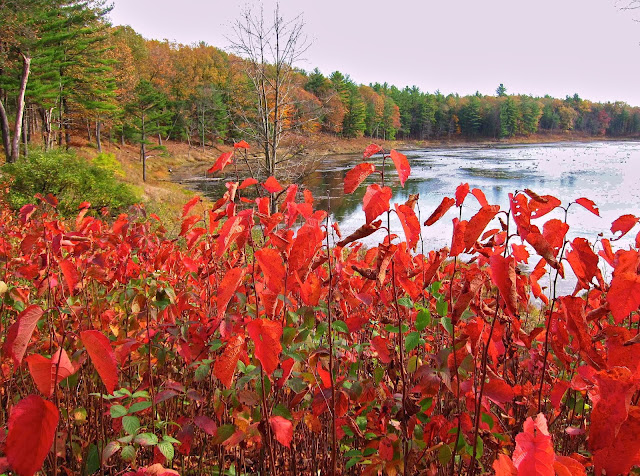 Tiny dots of blue fluff were wafting around in the air, the winged form of the Wooly Alder Aphid, quite possibly setting forth to start a new generation of aphids.


I didn't have to look far to find just such a colony of the wingless form of this tiny insect clustered on a branch of Speckled Alder.  I have read that all of these individual aphids are females clones of one other, produced asexually without requiring a male.  After their feeding has depleted the resources of the twig they're affixed to, then they will produce clones with wings -- including some males -- that can fly away to mate and lay eggs on other twigs, most often on Silver Maples.  Isn't nature amazing?


Until I enlarged this photo on my computer, I hadn't noticed the presence of ants among this colony of Wooly Alder Aphids.  I was aware that ants exploit the common garden-variety of aphids for their exudant honeydew, but I didn't know that they did the same with this particular aphid.  I wonder if that white waxy fluff that the aphids exude is collected as food by the ants.  I shall have to do some research to find out.

Update:  Here's a link to a site with lots of information about this fascinating insect.   Apparently, it's not just ants that feed on this aphid's honeydew, and some other creatures feed on the aphids themselves.  On another site from Northern Woodlands magazine, I read that the larvae of Lacewings burrow in among the aphids and feed on them, plucking off threads of fuzz and fastening them to their own bodies, so as to disguise themselves and avoid detection by the guardian ants, who would kill the larvae if they were discovered.  Like wolves in sheeps' clothing, they freely feed on the flock!

Posted by Jacqueline Donnelly at 11:47 PM

Yeh, see those in the alder thickets in my neck of the woods.
Thanks for the link to the fascinating creatures.
Blessings!

I too notice the beech holding on to their leaves these days. Looks like a wonderful walk.

It's always fun to see surprises within a photo, after you get home !