A Nature Stop Close to Home

On Tuesdays, I work all morning at a Hospice home (starting at 6:45am) and then need a nap after lunch.  Since that doesn't leave much time for extended nature adventures, Tuesdays become good days for short hops to nature sites close to home.  Today I went out to the Skidmore Woods on the north side of Daniels Road, where I'd hoped to find a large group of Wild Bergamot in bloom.  Maybe I'd catch a Hummingbird Moth or a Monarch Butterfly feeding on the pale lavender flowers.

Well, I should have gone looking for Wild Bergamot last week.  They looked pretty spent today, even though they still held onto a few of the raggedy flowers. 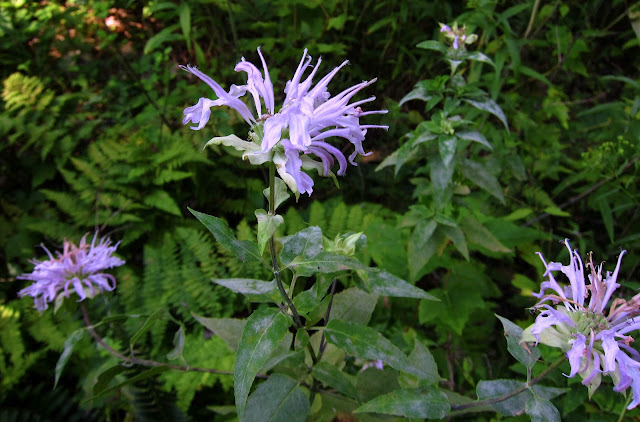 The Round-leaved Dogwood berries, however, were at their peak of beauty: pale blue, green, and white orbs held atop hot-pink pedicels.  I think white is the color of the ripest berries, but I rarely see a cluster of all whites, since the birds devour them well before all ripen. 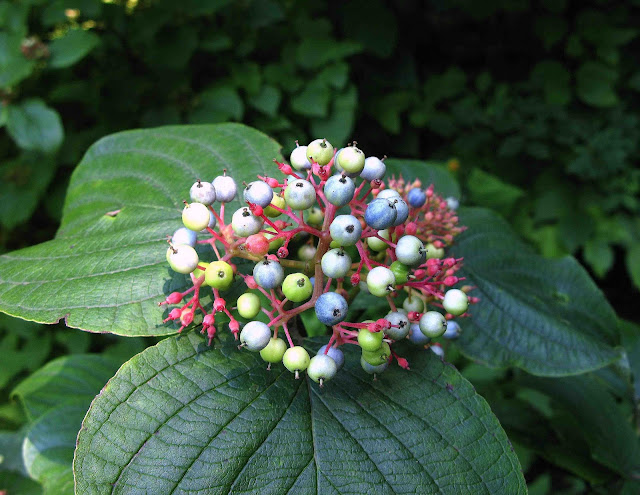 I know many people think of Pokeweed as a big coarse plant, but I find the curving berry stalks very  attractive.  I also like to see the progression of ripening as the berries form. When fully ripe, the berries will be a deep purple-black and the stalks a vivid knock-your-eye-out pink. 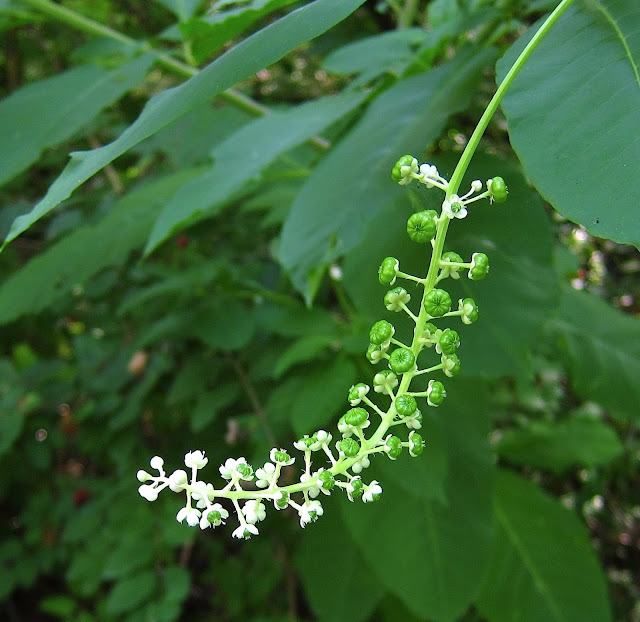 I kept searching the tops of Queen Anne's Lace, hoping to catch some Jagged Ambush Bugs in predatory action.  No Ambush Bugs today, but I did find this Goldenrod Crab Spider poised for battle. 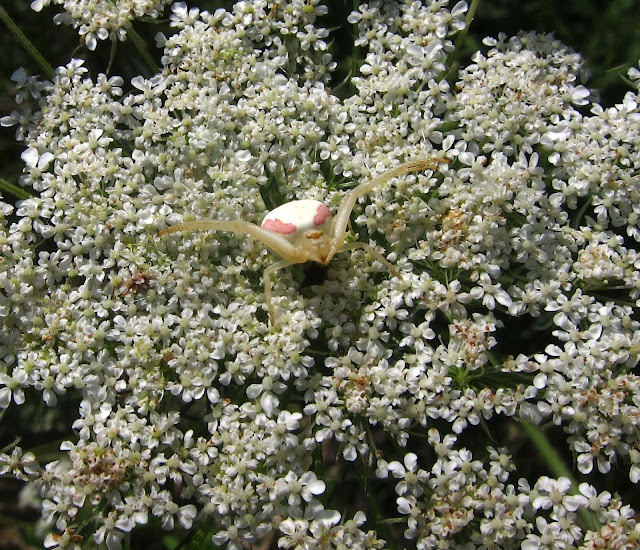 I was struck by how this spent flower head of Queen Anne's Lace formed a marvelously intricate basketwork.  So lovely! 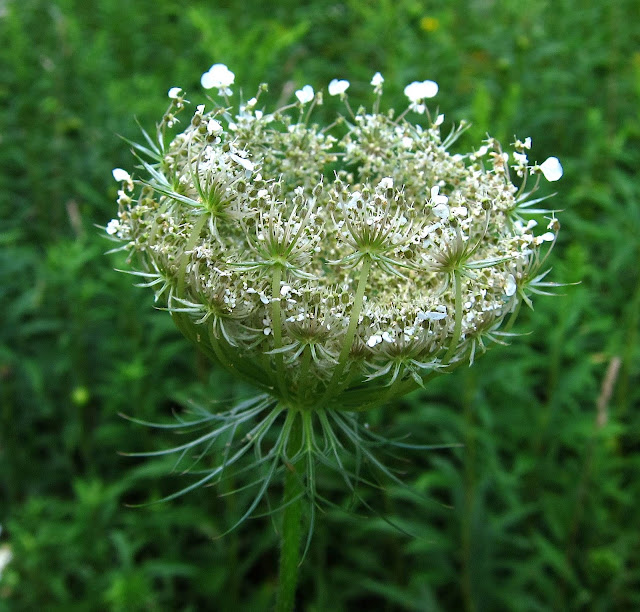 Every time I pass a patch of Common Milkweed, I search among its leaves, hoping to find an exquisite Monarch Butterfly chrysalis.  No chrysalis today, but I did find an early instar of the caterpillar that will eventually turn into one. 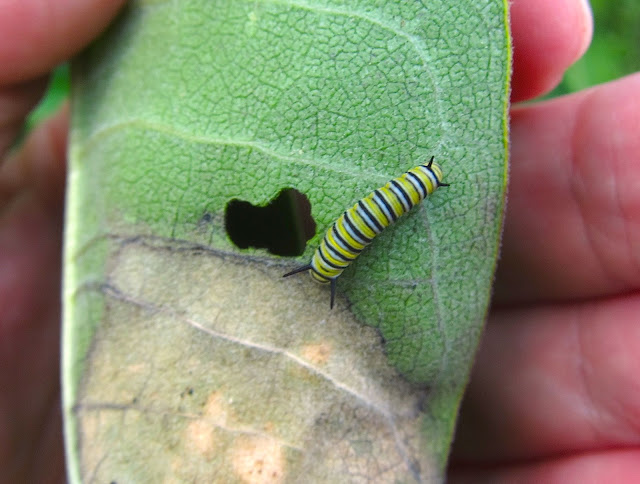 This dragonfly with the big opalescent eyes kept returning to the same perch again and again, allowing me to inch closer each time and finally capture the color of those marvelous blue-green-purple eyes.  I also was able to note that the stigmas on the fore and rear wings were of different colors.   I haven't yet figured out which species of dragonfly this is.  Maybe some of my readers will know.


Update: As one of my readers named Annie suggests in her comment, this is probably a Blue Dasher.   I know of no other dragonfly with such huge blue eyes and white face that has a brown and yellow striped thorax.  My confusion remains, however, because if this were a male, his abdomen would be blue, and it it were a female (which does have parallel yellow stripes along her abdomen), her eyes would be brown.  But then, I did see some internet photos of what were labeled as Blue Dasher females with blue eyes.  Perhaps this is an immature male, before his abdomen turns blue.  I didn't find any photos of ANY species of dragonfly that had different colored stigmas on the front and rear wings.  By the way, I do have a photo of a Blue Dasher among the column of small photos on the right side of this blog.  The face sure looks the same as this one's.
Posted by Jacqueline Donnelly at 9:47 PM

Oh, thank you, thank you for these photos.
This morning on my country road walk I smiled at so many little wonders of nature, thought long and hard about why the red squirrel was in such a hurry to get to the other side of the road that he had to run in front of me instead of waiting sensibly until I had passed. What kind of schedule can she be on?

What a lovely walk. Could your dragonfly be the male Blue Dasher? They're out in full force near me and great to watch....

Oh June, I thank YOU for your lovely comment and your query about the Red Squirrel. The thing about Red Squirrels is that they are ALWAYS in a hurry.

Thanks, Annie, for the nice comment as well as your suggestion regarding the dragonfly. I had considered that species (I even have a photo of one in the column of photos along the right side of this blog) but it didn't completely match images of either male or female. Perhaps an immature male.

I stumbled upon your beautiful and informative blog some time ago, but have never been brave enough to comment. Since finding your oasis inside the flotsam and jetsam of the internet, my own nature walks have become much more fully realized. Thank you!!!

While reading an article about technology addiction today, one passage immediately brought your blog to mind. Thought I'd share:

I know of a good treatment (for computer/Facebook/Twitter/internet addiction), if not a cure, said Nicholas Kristof in The New York Times. It’s called nature. When we get into the great outdoors, the illusion of control that technology provides disappears, and we are “deflated, humbled, and awed all at once.” In the “vast natural cathedral,” we are reminded of a world much larger than ourselves—one that predates us, will outlive us, and at whose mercy we exist. To escape our “post-industrial self-absorption,” we all need to leave our iPhones at home at least once a week, and go take a walk in the woods. Your devices will be waiting when you get back, and you’ll be a bit saner when you rejoin the endless conversation.