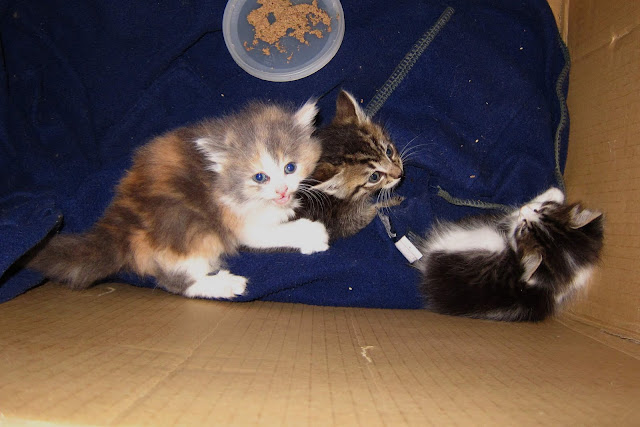 Remember those three little kittens I wrote about a few posts back?  Their feral mother hid them again the day after I tried to gentle them, and they didn't come back to my yard.  I was afraid that it wouldn't be long before they would grow too wild to ever tame.  So today I went hunting for them among the abandoned buildings behind my house.  I probably wouldn't have found them if they hadn't all started hissing and spitting as soon as they saw me coming close to their hiding place.  Poor little scaredy cats!  Ignoring their tiny teeth and claws that didn't have enough strength behind them to hurt me, I gathered them up against my chest and hurried home, determined to keep them confined until they could overcome their frantic wildness enough to make nice pets.

I took them all to the veterinarian, who pronounced them all healthy and old enough to be weaned.  No fleas or ear mites, but two did have Cuterebra larvae under their skin, only one of which was big enough to remove.  So I'll have to take one kitten back in a week or so when the larva gets big enough to see and extract.

They've probably never had solid food, but they did lick some canned kitten chow off of my fingers and I gave them some special cat-digestable milk.  The vet assured me that they will eat when they get hungry enough.  He also told me that the dark tiger is a male, the other two little cuties are females.

We may keep the little tiger for ourselves, so that means we need to find homes for the little girls.  Aren't they adorable?  Free to a good home, if you promise to have them neutered.

Now I'm trying to locate an organization that will trap their mother, spay her, and let her return to the woods behind my house, probably too wild to ever be anybody's pet.  But who knows?  I've heard stories of feral cats that eventually came to trust the humans who fed them.  But she may hate me forever for stealing her little babies.
Posted by Jacqueline Donnelly at 8:10 PM

Hooray! Good on you for finding and rescuing them. I always feel so sorry for feral cats, always endangered by disease, accident, and predation.

Great that you found them and saved them. They sure are cuties.

Great to hear you have been successful in your endeavours with the kittens, and keeping the little boy he is so cute.
Thanks for letting me know about the stability of your canoe, if I can find a second hand one I may indulge myself.

I'm so glad you got 'em! If I were in the market for a cat, I'd be at your doorstep. (MiMau has veto rights on that decision.)
I hope MomCat can be trapped and tamed. Some can, some can't . . . but she sure would be safer as somebody's pet.

Oh my gosh, they're adorable! Little hissy things, soon to be cuddlers, and snugglers. They will never know how lucky they are. If I didn't already have four cats, I'd make the trip to Saratoga just to grab that little dilute calico. She's adorable, and looks to be the feistiest of the bunch.

I hope that you can find an organization that will help you with the Mom Cat. It would be really good to get her spayed and released, before she gets pregnant again.

My friend's sister had a feral cat that they fed who used to *bring* her kittens to the house. Which meant that they ended up with a bunch of cats. They were finally able to trap her and spay her, but not before about three litters.

I have been trapping feral cats for a few years now......I just put the Havaheart out with some cat food, or some tuna, only leave the trap baited during the so you don't catch a skunk.
I recently got 5 kittens, and then their mother....got the mother fixed....and she calmed down. The neighbors ended up adopting her.
You're doing good!!!!!!

Awwww! A full timer at lunch today was jealous of the six weeks I'll have off between contracts. I said, yes, but you'd have to live in a dorm, eat in the EDR, and have no pets. Give a kitty a hug for me.