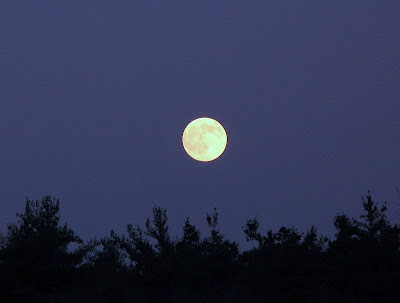 Our lucky night! Not only did we have a full moon tonight, we had a full moon at the closest point to earth in its orbit, making it bigger and brighter than any moon we have had since 1993, the last time we had what astronomers call a "super perigee moon." We also had a clear cold night, perfect for viewing this super moon, and it just so happened to fall on a Saturday, the weekend day that Moreau Lake State Park had scheduled a full moon hike around the lake. Perfect!
I had volunteered to accompany the hikers tonight, bringing up the rear to make sure the group stayed intact. Since I, too, had to keep up with the hikers, I couldn't take time to make perfect photographs of this beautiful moon, just snapshots on the run. But some of those shots had some charm, despite their technical inadequacies. Here's the moon just clearing the mountains as we walked through the woods on the western shore of the lake. 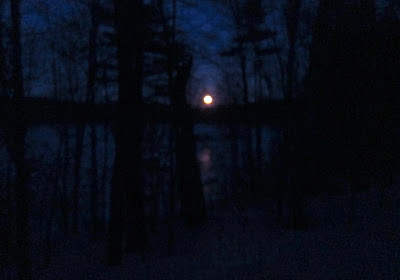 I am nearly 69 year old. How many full-moon risings have I witnessed? Too many to count, and yet each time I witness that golden globe lifting itself as if by magic above the hills or the treetops I am stunned with amazement. Tonight the sight stopped me dead in my tracks, where I would have stayed for a much longer time if I had not had to catch up with the hurrying hikers.
Here's the view from the bridge at the far end of the lake, with the moon casting silver light on the frozen surface. (That misty ring around the moon is a camera effect. The real moon was sharply defined against a dark clear sky.) 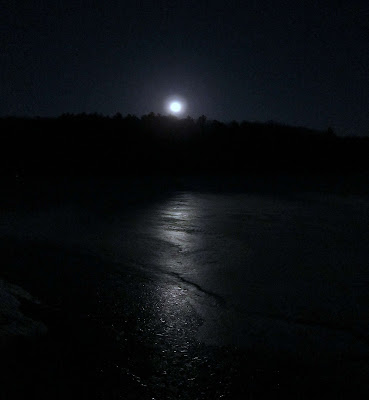 Returning via the eastern shore of the lake, I was enchanted by the moon-washed landscape of snow-covered lake and dark mountains rising against the sky. When I first looked at my photograph of this scene, it was almost perfectly black. But by boosting the exposure I discovered this grainy image that I thought had a graphic beauty all its own. 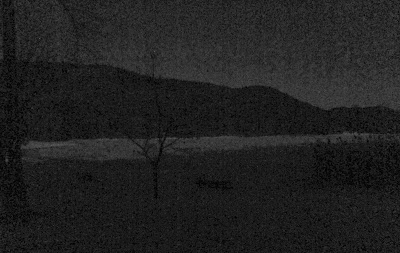 I love full moons too. They always seem magical to me.
This so-heralded one doesn't seem to be so much bigger, but it surely is bright, bright white!
Great pictures, technically perfect or not!

These were beautiful photos and I'm sure glad that you shared them with us. I especially liked the first one.

Very nice! I love the one over the water! It was incredibly bright by the middle of the night, although here its rise was obscured by trees and hills, alas.

Was it not exquisite! I could have stayed and watched all night - my photos are even less technically perfect - would that they were half as fine as yours! - but the actual event was perfect!!! Thanks for your 'moon shots'!

in my youth, mooning meant something different.

Great photos Jackie! It was so nice to meet you on Saturday. My husband and I really enjoyed the walk. I'm in the process of writing a story for All Over Albany about it; I'll let you know when it posts.

You weren't kidding about charm - a couple of those shots are WONDERFUL!

Really great to see your photos of the super moon, as down under we had stormy weather, lots of rain and only a glimpse of the moon.The cold clean air in your neck of the woods made for a beautiful silver moon.

Thank you, dear readers, for taking the time to leave comments. I love to hear from you, and I wish we could all go walking together to see such sights as that incredibly beautiful moon.

Here's that post, Jackie. Thanks for sharing your knowledge that night!