Big and Blue and Beautiful -- and Still in Bloom! 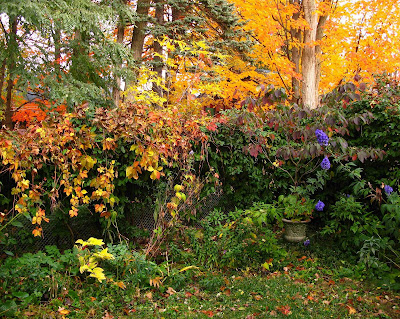 Believe it or not, I still have flowers blooming in my garden. Well, I guess you could call it a garden, this neglected patch at the back of my house, left to grow wild because that's what I want it to do. I planted a bunch of native plants back here, some of which have thrived, while others have disappeared. The soil is sandy and dry, and no part of the yard gets more than an hour or two of sun each day, so most flowers just don't like it. But Monkshood does. Growing too tall in their effort to reach for some sun, the plants get pretty gangly, but boy do they bloom! And long after everything else has gone to seed. Monkshood is not really native to this northern part of New York, but it seems to like it here, blooming even after frost has killed all other flowers. And I'm so glad! 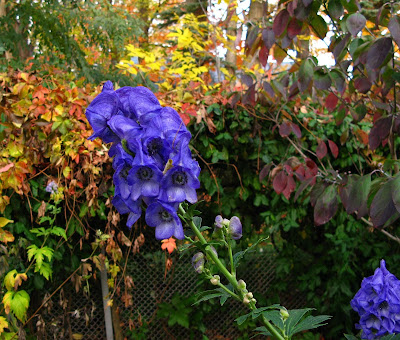 There is a species of Monkshood that is native to the Catskills Mountains of New York, but it's never found in the wild up here in Saratoga County. I bought these plants from a nursery and I can't remember which species they are. Whatever the species, Monkshood is known to be a very poisonous plant if ingested, as its alternate common name of Wolfsbane suggests. It's probably not a good idea to plant it where young children might be tempted by its beautiful color to try to eat it. There's no reason, though, not to feast your eyes on it. And if you cut a stem to put in a vase, be sure to wash your hands and keep the flower away from nibbling cats.

Posted by Jacqueline Donnelly at 3:56 PM

I love that blue! And she's like the"fat lady of the garden" signalling the end of the blooming season... we finally got a good frost last night, all my fragile flowers drooping today.

Yes, that's a good way to put it ("It's not over until the fat lady sings"). We still have not had a killing frost, but the Monkshood seems to keep right on blooming after frost. That's amazing for a plant that's native to a more southern part of the eastern U.S. Thanks for stopping by to comment, dear Jane.

Monkshood, wolfsbane, aconite - one of my favorites. Even in my long-gone-to-seed gardens in the central Adirondacks, the monkshood is still blue. Okay, the blossoms are looking pretty ragged now, thanks to the snow and numerous killer frosts, but I can still look across the yard and see a dash of color where they are blooming.