Up North to Lake George

I have a friend who can't drive anymore, so once I week I try to take him out for some nature adventures. Today we headed north to Lake George, with a quick stop along the way at Glen Lake to walk on the bikeway there and torment ourselves with trying to ID the birds that were singing away in the bushes. Way hidden in the bushes and the tops of the trees, always eluding our scanning binoculars. Does anyone know which bird goes "witchety witchety witchety" over and over again?
Since my friend wasn't up for a long walk today, we took a long drive instead, 50 miles north to Hague with a stop in Bolton Landing for lunch at a lakeside restaurant. The food was pretty bad, but hey, what a million dollar view! I don't think there's any prettier lake in the world than Lake George at its northern end.

At Hague we headed west toward Brant Lake and Exit 25 of the Northway, then sped on home in good time. But just as we left the village of Hague, we spied this beautiful waterfall right by the road, with a parking area and a path leading into the woods and along the stream. Of course, we had to stop and admire the view. 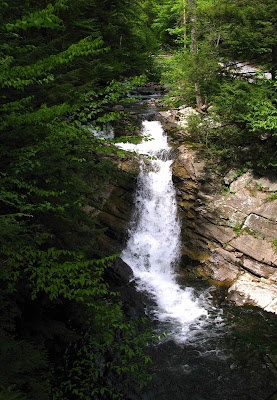 While standing on the rustic bridge overlooking the waterfall, we were entertained by a pair of Phoebes swooping across the brook again and again, snacking on gnats as they flew. They would land on a twig and sit there, wagging their tails up and down and teasing me into trying to take their picture. Ha! Fooled you again! And again! And again! I guess you'll have to look them up in a book to see what they look like. Sort of greyish brown, the color of bark. If they weren't in constant motion, even when they perch, you'd never see them.
Posted by Jacqueline Donnelly at 8:29 PM

Hi Jackie - Common Yellowthroat is the bird that says "witchety, witchety, witchety." Hard bird to see, though. The Eastern Phoebe is often found around bridges - I call it the bridge bird! Good birding to you! Linda