Visiting Critters Along the Betar 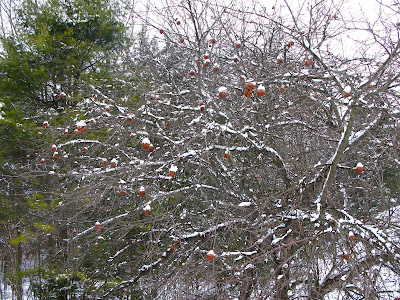 Snow! Hooray! Only a couple of inches yesterday, but enough to cover the bare brown ground and pretty up the landscape a little. Even these shriveled old apples took on a rosier look with caps of nice fresh snow.
I had a date today to walk the Betar Byway, a lovely woodsy, watery walk along the Hudson in South Glens Falls. My friend Sue had seen a beautiful snow-white squirrel there a few days ago, and we hoped to find it again. As it happened, we didn't (the snow made for good camouflage for the critter), but we had a good time anyway. For one thing, a Carolina Wren was singing its tiny heart out in the shrubbery along the path and delighted us with its song. I could not see this little brown bird, but Sue did. Here she is, taking a photo of it with her great zoom lens. She'll be posting that photo soon on her blog Water Lily, where you already can see her splendid photos of that rare white squirrel. 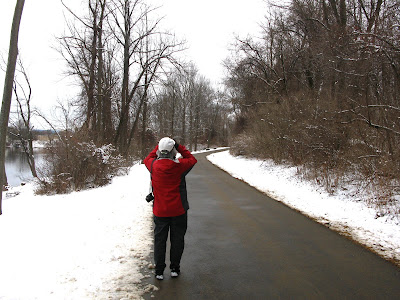 Sue also led me into a honeysuckle thicket along a small stream, where we found fresh evidence of some wild critter's ambling habits. The first sign we found was this hole in the ground with tracks leading in and out, and a well-trampled trail leading away. 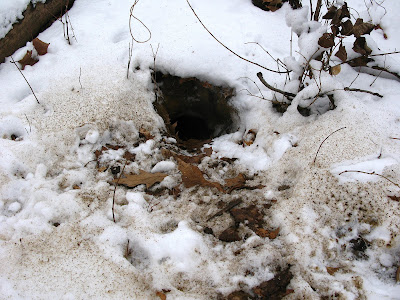 That trail led to another much visited hole in the ground. This critter either has a very friendly neighbor, or several entrances to its own burrow. Both holes reeked of something pretty funky (skunky?), and the entryways appeared to be dusted with a fine brown spray. Could it be that the animal shook its dirt-covered fur each time it emerged from its den? 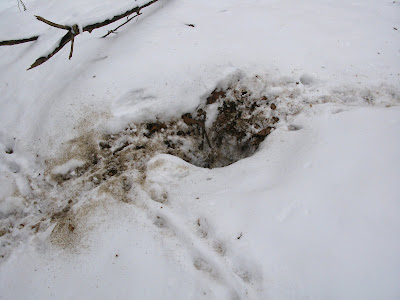 The trails were so packed down by frequent travel that it was hard to discern individual footprints. We did find a few, however, and they measured only an inch or so wide and less than two inches long. Small feet with long nails and a low-slung body that pushed the snow aside as it walked -- we could almost picture it ambling along, down a bank and across a small stream, then up a rise in a direct route toward a group of garbage cans behind an apartment building. We couldn't actually see white stripes down a broad black back, but imagination filled in those details. Those apartment dwellers better be careful when they take out the garbage at night. 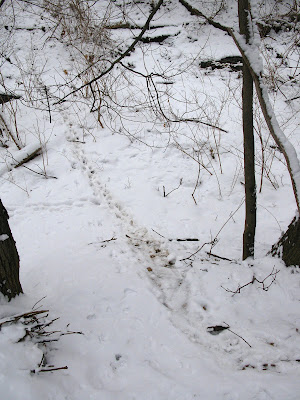 Posted by Jacqueline Donnelly at 9:50 PM

White Squirrel. Reminds me of the White Bison worshipped by the Native Americans. I wonder if the Squirrel has an omen attached to it?

I've never had the opportunity to track a skunk. Maybe in my next job...

A good find. You seem to be in a hotbed of wonderful nature finds - cool plants, great birds, spiffy mammals...Saratoga is the place to be, eh? :D

Well folks you should have seen Jackie, when I showed her that first little den, she got right down in front of it, peering in - then looking at the tracks, I said, "Uh, maybe it's a SKUNK" - hmm, if we had disturbed him at his home, this blog could have turned out quite differently !

Good tracking! Especially with figuring out the 'dirt spray'. And we're enchanted with the thought of a white squirrel. We went to visit Water Lily and were amazed at those photos. What a treat to see such an animal!

Hi Allan. I don't know about any omens regarding white squirrels. They're pretty rare, but I've read the white ones are just a color phase of the ubiquitous gray squirrel, similar to the black ones. But it's easy to understand how they could inspire thoughts of magical powers.

Hi Ellen, I guess you probably don't get skunks up there in the Adirondacks. Wouldn't it be great if your next job brought you to Saratoga County? Although I truly do wish you did not have to move.

Well, Sue, I had to get down there to smell the little piece of poop outside the den. It's all information, hey? Anyway, I'll bet a skunk wouldn't spray inside its own den. But I'm glad I wasn't proved wrong about that.

Hi Kenton and Rebecca. Better not quote me about that dirt spray. It was just a guess. And I'm glad you visited Water Lily. All Sue's photos are amazing, don't you think?.