What a fine day to be outdoors: sunny and cool with a gentle breeze. A great day to return to the Hudson Ice Meadows in Warren County, especially with such a guide as Evelyn Greene, a botanizer par excellence who not only knows her wildflowers, but mosses, grasses, sedges, and liverworts as well. 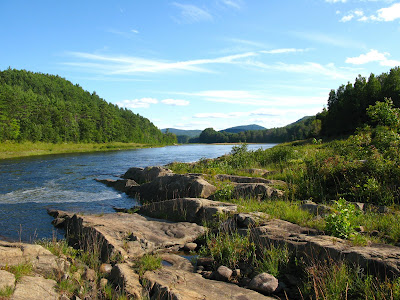 A couple of weeks ago, Evelyn came down to paddle "my" stretch of the Hudson at Moreau, and today she invited me to explore "her" stretch. And believe me, she knows that stretch like the back of her hand. She has observed these ice meadows -- a remarkable riverside grassland formed by masses of rolling ice each winter -- for many years in every season. In fact, it was she who first piqued my interest in this place when, maybe a dozen years ago, she gave a talk about "frazil" ice at the Adirondack Mountain Club. I just learned today that that speaker was she. I also learned that I had perpetuated an error about this ice when I wrote about it in my blog for August 13 (in addition to misspelling "frazil"). These masses of fluid ice, she explained, do not really "scour" the banks, as I had said, but rather "mash" them down with great weight, preventing trees and shrubs from attaining normal height and thus preserving the open grassland habitat.
And grasses certainly do abound here. Today the wind was moving in waves through tall stands of Turkey Foot (Andropogon gerardii) and Indian Grass (Sorghastrum nutans), grasses more common to prairie land than Adirondack river banks. Here and there we found these cotton-ball tufts of Tawny Cotton-grass (Eriophorum virginicum) shining in the sun.
We also found a plant called Slender Yellow-eyed Grass ((Xyris torta), but it's not really a grass. Nearly past its blooming season, but still bearing a bit of a petal, it's also not really supposed to grow around here, its normal habitat being more southerly. As I said before, a remarkable habitat here. 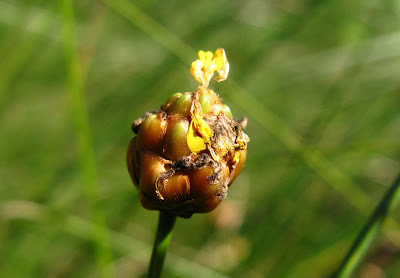 Various sedges thrive here, too, as expected for a wetland. Yes, this habitat is a wetland as well as a grassland, with numerous pools formed by depressions in the rocks, as well as little flowing streams and low marshy spots. Evelyn, of course, knew the names of all the sedges, but I neglected to take down notes, except for two. Growing everywhere, and easily confused with grass because of its long, fine, yellow-green stems with no fruits or flowers, was a sedge called Carex lasiocarpa. (My photo of this one was not successful.) I did get a useable photo of Brown Bog Sedge (Carex buxbaumii), and I'm awfully glad I did. This one, with its heads that look a bit like tiny greenish pine cones, is classified as "threatened" in New York State, as well as in many surrounding states. So we were lucky to find it. (Those greenish "cones" will soon turn brown, by the way.)
Another plant that is classified as threatened but grows profusely here is Dwarf Sand Cherry (Prunus pumila var. depressa), which sprawls all over the sandy areas. Evelyn told me the banks here are white with its blossoms each spring, but today we were lucky to find just a few red cherries. 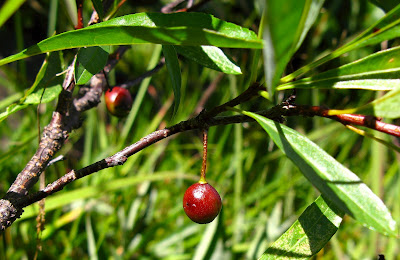 Exploring the pools that form in the rocks, we found a number of water plants, including a couple of bladderworts (Utricularia), microbe-eating plants that capture tiny creatures with bladders attached to their underwater structures. At least, the floating ones do. Horned Bladderwort (U. cornuta) grows out of damp sand, so I don't know how its bladders could inflate to suck stuff in. (See its photo on my blog post for August 13.) Evelyn showed me these creeping leaves of Flat-leaved Bladderwort (U. intermedia), which I never would have identified, since its small yellow flowers have long since disappeared. (That woman knows her plants!)
Sharing those soggy spots with the bladderworts were these Spatulate-leaved Sundew (Drosera intermedia), another state-protected plant (classified "exploitably vulnerable"), also another meat eater. Those shining "nectar drops" tempt small flies to land, then the tentacles close over them, and digestion begins.
We, being fruit eaters, were happy to find abundant patches of Large Cranberry (Vaccinium macrocarpon) growing among the rocks. Pale ivory now, with some beginning to blush, the fruits should ripen to bright red by the end of September. I promised Evelyn she could have them all.
In fact, if I'd found buried treasure there, I would have given it all to her. Fair exchange for all the botanical treasures she showed me, including nine new plants to add to my life list. And an absolutely gorgeous afternoon, climbing on rocks and wandering the shores of our beloved Hudson River.
Posted by Jacqueline Donnelly at 8:59 PM

Wow! What a very cool way to spend the day. I don't have anything like your ice meadows around here. Thanks for sharing!

What a splendid adventure! One of these days I will make a foray with the two of you!!!

Oh! that sounds so amazing! Your photos, as always, are beautiful.We are truly blessed to live in such a diverse and rich area...and we are so lucky that there are so many very knowledgeable people and that many are willing to share their knowledge!