Something Odd in the Hazelnuts

We had a few warm sunny days -- warm enough to spur the Coltsfoot into blooming, anyway (see my previous post).  So although our weather has once again turned dark and rainy, I was hoping I might find American Hazelnuts in bloom, since I often find their tiny red female flowers well before finding Coltsfoot. So I donned my raingear today and headed over to Mud Pond at Moreau, where hazelnut shrubs grow abundantly in the powerline that runs along the north shore of the pond. 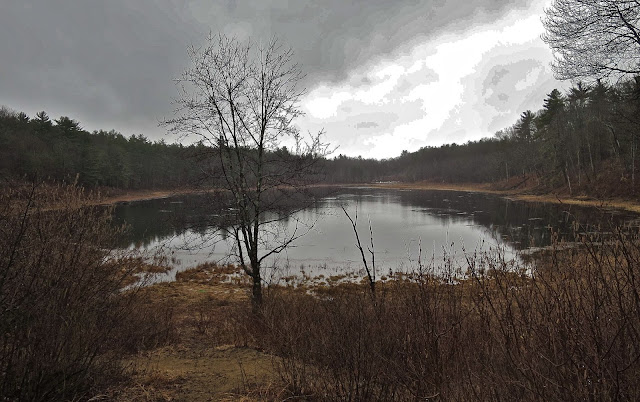 The first thing I noticed was Wow! Mud Pond had WATER in it! A couple of droughty years had deprived the pond of its usual rainfall and snowmelt until it became more like a muddy marsh than a pond.  But today I could see rain-dappled water filling the pond from shore to shore under a leaden sky.  It was still lower than it should be, but today the pond was liquid enough for a pair of Hooded Mergansers to be doing their courting dance out on its gleaming water.

The second thing I noticed were the hazelnut shrubs festooned with dangling male catkins.  These catkins have been present on the shrubs throughout the winter, but only in the past week or so have they lengthened to the point where they actually sway in the breeze.  I flicked a few with my fingers, but I didn't see clouds of pollen releasing yet.   I did not know if this was because they were wet from the rain or if they were not yet ripe.  If the males were not yet shedding pollen, I doubted that I would find any female flowers opening to receive it.  But I searched through the twigs anyway, hoping to find some tiny spots of bright red. 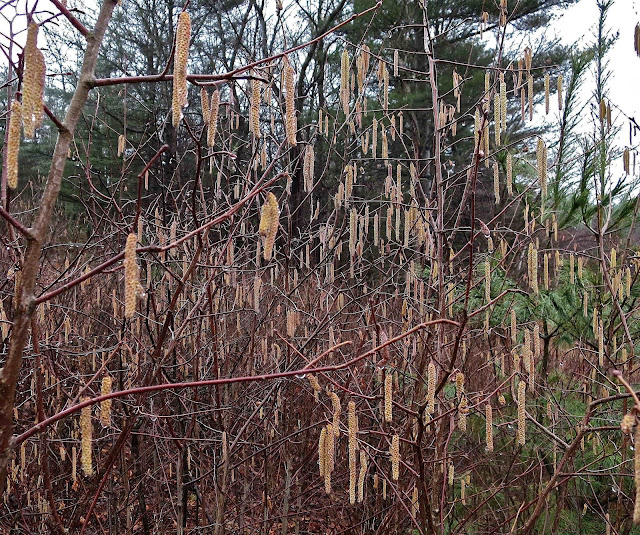 Ooh, there's something red in this shrub!  Nearsighted as I am, I took off my glasses to peer into the branches, where I discovered that the red stuff certainly wasn't a flower.  Yikes!  What IS this gunky coating on the twigs? 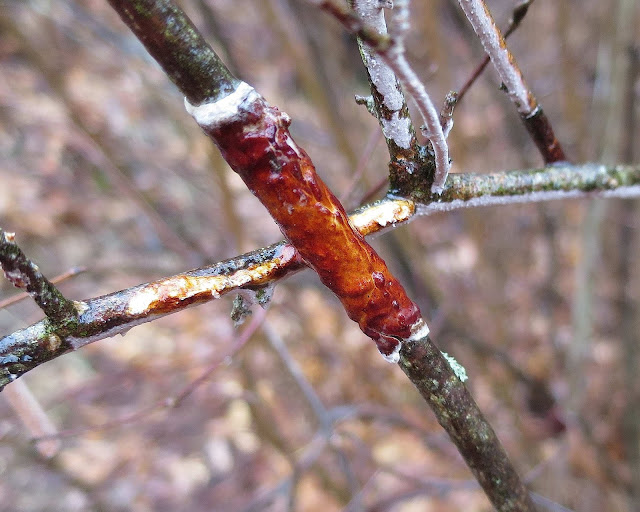 Again and again, in dozens of shrubs in a limited area of the powerline clearcut, I found globs of this reddish stuff, probably a fungus, coating the hazelnut twigs. Notably, it always occurred where twigs came in contact with each other, with the fungus gluing the twigs fast together. 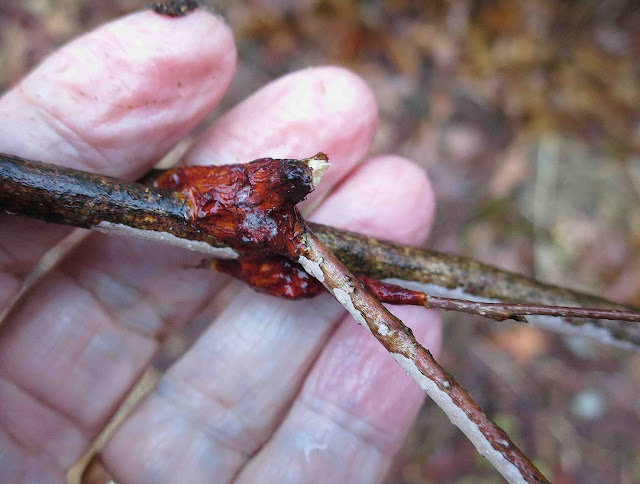 I also noticed a whitish coating that ran along the same twigs.  A different fungus or another form of the same?  Is this a benign concomitant that will do the shrubs no harm? Or will it spread to ultimately impair the shrubs' ability to thrive?  I really don't know!  But I do know some mycologists I might ask.  I'll be back to post an update if and when I learn what this is.

UPDATE:  Well, my go-to expert, mycology professor Kathie Hodge of Cornell University, told me she was "darned if she knew" what this was, but she suggested that it might be "a wounding response where the twigs rubbed" together.  Could it be a substance produced by the hazelnut shrub itself, like our bodies produce when we grow a scab?  The mystery remains!

SECOND UPDATE: I took a specimen of these glued twigs over to the Moreau Lake State Park Office and charged Assistant Environmental Educator Maranda Welch with researching what this stuff could possibly be.  She promptly came up with Hymenochaete corrugata (Glue Crust Fungus) as a possibility, and she showed me the Wikipedia link where she learned something about it. We're still not sure (the Google images don't look quite the same), but Wikipedia did comment that one of the primary hosts for this fungus is hazel, and that it essentially glued dead twigs to living ones to prevent the dead ones from falling to the ground where they could be decomposed by rival fungi. Sure sounds like the same behavior, even if it's not exactly that fungus.

Posted by Jacqueline Donnelly at 10:14 PM

Very interesting. What is more amazing is that you found it. I hope someone knows what that is...

There's no end to the interesting things in the natural world and every so often we discover a new one.