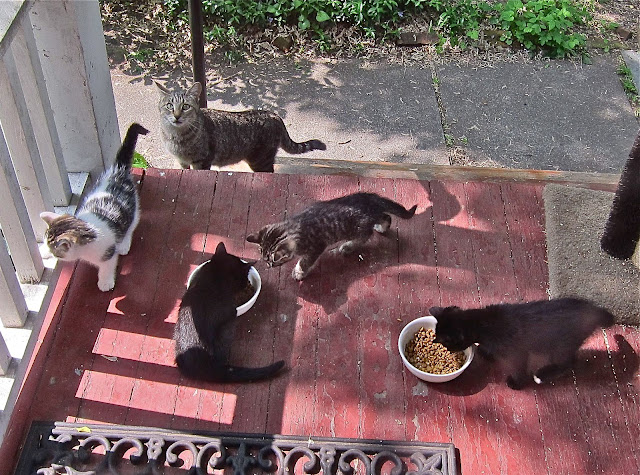 See that mom cat in the photo above?  She's a feral cat, wild as a squirrel, and those were just four of the five kittens she had with her first litter last summer (all of whom we have since trapped, neutered, and either released or delivered to the shelter).  She had five more later that summer, two of whom survived and continue to visit our back steps for the food we put out.  And now she's pregnant again.  I didn't realize that March 28 was Respect Your Cat Day when I baited the trap again to try and capture this very prolific pussy, but I certainly was thinking of her.  I had learned that the Saratoga County Animal Shelter would confine this very pregnant mom cat and keep her until her kittens were weaned, after which they would spay her and return her to be released once again in my back yard. The shelter will keep her kittens to offer for adoption.

The problem is, she hasn't gone into the trap.  One of her second-litter kittens did, though, and luckily, I was able to have him neutered the same day (yesterday) at the Ballston Spa Veterinary Clinic.  His littermate still remains intact, so we may yet coax him (or her) into a trap to receive the same procedure.  Our big hope, though, is to finally trap mom cat, get her spayed, and let her spend the rest of her feral life enjoying the free food offered on our back porch without having to share it with litter after litter.  Wish us luck.  The spay-neuter-release clinics offer low-cost procedures, but they certainly aren't free.
Posted by Jacqueline Donnelly at 10:33 PM

So, so kind of you to not only care, but to do something about it. Very lucky cats. Now if momma would just step into that trap!

Good luck with your efforts. I echo Wendy, how very kind and responsible of you to undertake this.

Someone dropped a female kitten off at the woodland home of friends, and then she had kittens, and kittens and the kittens had kittens. They wound up with somewhere around 50 cats around their place. It's been estimated that one cat could have thousands of descendants within her lifetime; and if those cats are feral or allowed to roam they will kill thousands of birds and small mammals.