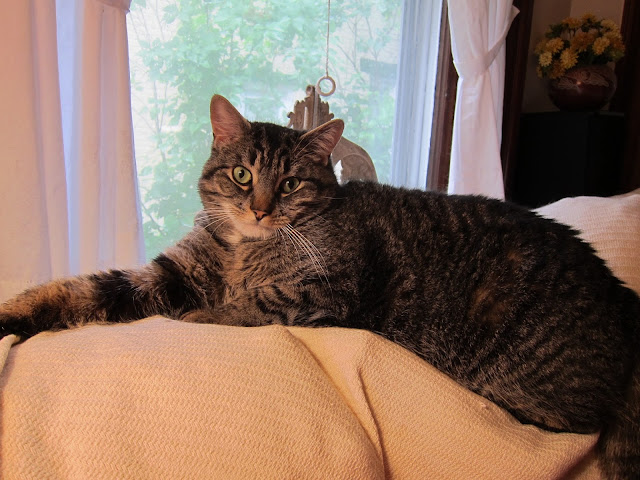 This is Bebert, the only wildlife I will be encountering for quite some time -- not counting the birds and squirrels I can see through the windows from my convalescent couch.  He actually IS kind of wild, one of three kittens we snatched from a feral momcat when he was barely four weeks old, a couple of years ago.  He became tame and cuddly enough as a small kitten, but as he matured he became very skittish, running in fear even from those of us who have tenderly cared for him from the first.  But wonder of wonders, since I've come home from my knee-repair surgery last Friday afternoon, Bebert has spent much time curled on the back of the couch that has become my bed until I can navigate the stairs to my upstairs bedroom once more.  And even more wonderful, he has actively sought my caresses, pushing his lovely little face into my hand and begging for ever more lavish scratchings under his chin and around his ears, purring madly all the while.  I will never say that gaining his sweet affection was worth the agony that placed me here on this couch,  but I will admit that his furry companionship is helping to ease my confinement.

And believe me, I am grateful for all the comfort I can gather.  My surgery turned out to me more complicated than expected, with the kneecap shattered into more than four pieces, rather than the two pieces the X-rays revealed.  Some fragments could not be saved, but the others were drilled through and wired together to form a semblance of the original, and the knee sewed up with the expectation that healing could now begin, 10 days after the original accident.

Well, now that I am home and with adequate pain medication, I do believe that healing will progress.  But that first horrifying night in the hospital could only have set the healing process back, as I writhed in nauseating, throbbing agony that would not let me sleep or even rest my pain-tensed body.  The pain medication I was offered -- Hydrocodone -- is but one step up from aspirin, hardly adequate to relieve severe post-surgical pain, especially after I had been taking the much more effective Oxycodone for 10 days as I awaited the surgery.  I couldn't believe that the same surgeon who had prescribed the Oxycodone pre-surgery would now step DOWN the scale of pain relief following this operation.  But the nurses would not hear my arguments, assuring me that this was standard protocol,  nor would they seek further orders from the surgeon when the Hydrocodone obviously proved ineffective.  The most terrible night of my life ensued, especially since I had to climb out of bed every two hours to a bedside commode to empty my bladder of the liters of IV fluids pouring through me.  I have never felt so helpless in my life.  Or so furious, because I knew that this level of pain was completely treatable (I worked  as a Nursing Assistant with Hospice for 15 years and had witnessed the mercy of morphine many times.)

I expressed this fury toward my surgeon when he visited the next morning, only to hear him express his surprise that I had not been given the intravenous  Dilaudid he had ordered.  WHAT?!!!  Yes, the relief I had sought had been withheld from me, despite the surgeon's orders, despite my nightlong begging for relief.  The doctor quickly demanded that I be given the IV meds, and in less than 30 seconds I could feel the pain drain from my body and I could rest.

I recount this experience not just for the drama of it, but also to alert my friends to seek adequate advocacy should they ever be in similar situations.  There must have been SOMEONE who could have corrected this abuse,  for abuse it most certainly was.  I felt like screaming and throwing things, but I was brought up to be too polite to defend myself this way.  I wonder if any action would have been taken if I had pitched some hysterics other than my quiet moans and groans and tears.  I have written to the hospital demanding to know why I was left to suffer so.  I wonder if anyone will answer me.

Ah, but it's good to be home.  I have my dear husband to tend to my needs, my sweet Bebert to bring his furry comforts to my convalescent couch, and most important of all,  a nice big bottle of Oxycodone pills to ease my pain and help me get back up and moving again.  After a bit, perhaps I will start exploring some of the region's handicapped-accessible trails.  I do need to get outdoors.

Update, Wed., June 17: My dear friends, your words of support and commiseration (see comments) have done much to console me, and I thank you very much for reaching out to me.  I did get a phone call today from a Patient Care Advocate from Saratoga Hospital (after leaving a phone message as well as writing the letter), and I was assured that an investigation would take place to try to determine why my surgeon's orders had been overlooked or ignored.  And also, why no effort was made to obtain more effective medication when the prescribed meds proved inadequate.  The PCA promised that I would hear back from him regarding the results of this investigation.  Obviously, nothing the hospital does now can change the suffering I endured, but I certainly hope that safeguards may one day be put in place to ensure no one else has to suffer the way I did.
Posted by Jacqueline Donnelly at 11:55 PM

Wishing you a speedy recovery with less pain every day. Hope you get to enjoy some nice weather outdoors which will also make you feel better. You went through hell now you need to have some peace and a cute kitty to keep you company. God speed.

Oh, I feel something, if just the tiniest sliver, of your pain and fury! Yes, such in attention, such lack of due care, is intolerable! But I'm also so glad you're past that night of hell! I can only wish you and pray for continued healing! Peace!

I am very sorry that your day following surgery went so poorly. Reading your note also reminded me once again how fortunate one is to have a caring companion in situations like yours. How do those living alone make it in times of need?

You probably already know this, but a letter directly to a Patient Advocate there at the Hospital will be more likely to be actually read & acted upon ... there is no excuse at all for the staff's INactions and your suffering that night. Perhaps your letter will spare someone else an ordeal !

I am so glad you are back home, enjoying the comfort and care of your husband and Bebert! Hopefully, your blog will help others seek a patient advocate BEFORE they need one. I hope your letter to the hospital results in some internal action to help the next patient rather than the usual CYA exercises. (I wonder if copying the authorities that license them, might also generate some action help make them more responsible in the future.) Medical practitioners are under a lot of pressure, but excusing such serious mistakes will not help them improve. After turning the experience into some positive action, I hope you can make that experience a distant memory so you concentrate on what you love.

Everyone going into a hospital must be ready to be their own advocate and fight for what they need -- that's the only way to insure adequate treatment and care.

How utterly horrible that you had to endure such horrific pain. I am so sorry to read this. I surely hope that you will recover quickly now and soon be about your normal, fascinating pursuits.

Lucy in the Garden said...

One of my relatives told me a similar story about lack of pain relief back in Europe. It turned out that a nurse was stealing opioid painkillers to sell them to drug addicts.