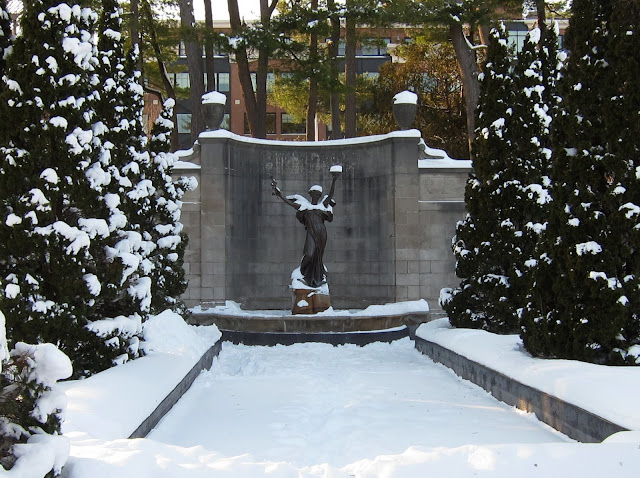 I went for a walk in Congress Park today, just a block from my home in downtown Saratoga Springs.  Although the fountain called "Spirit of Life" is shut off for the winter, I'm glad the beautiful figure, sculpted by noted American sculptor Daniel Chester French, remains open to view.  The sight of her always lifts my spirits.  Even when I'm not feeling low.  She just makes me smile.  Today she looked like she was wearing an ermine cape and bonnet.

Here was another sight that brought a smile to my face: a bunch of boys having lots of fun.  When my children were young, they used to delight in sledding down the hills in Congress Park, but now the city has banned sledding, probably for fear of lawsuits should someone get injured.  But it looks like these snowboarding boys have rigged up a way to have a few thrills on their own,  attaching a long bungee cord to a lamppost and piling up show to make a ramp against a wall.  Here, one boy gets ready to fly on his board, while his buddies hold the bungee tight. 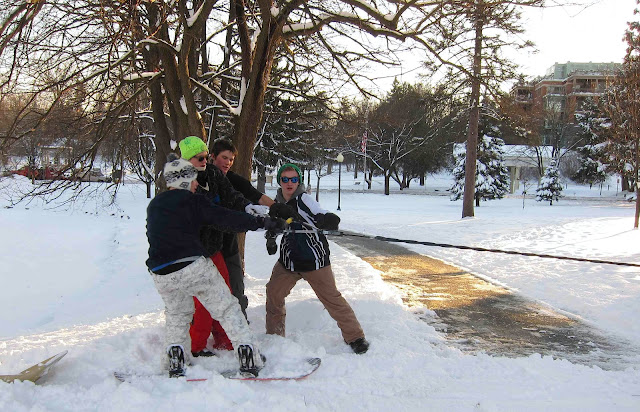 There he goes! He drops the cord once it goes slack, and he heads toward the ramp. 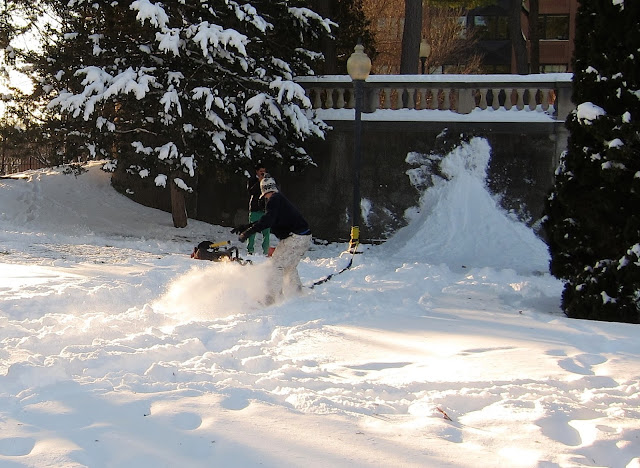 Up he goes, and then down again.   Looks like a lot of fun.  I watched while they tinkered with their design, trying to perfect the track and slide.  They were very engaged in their project. 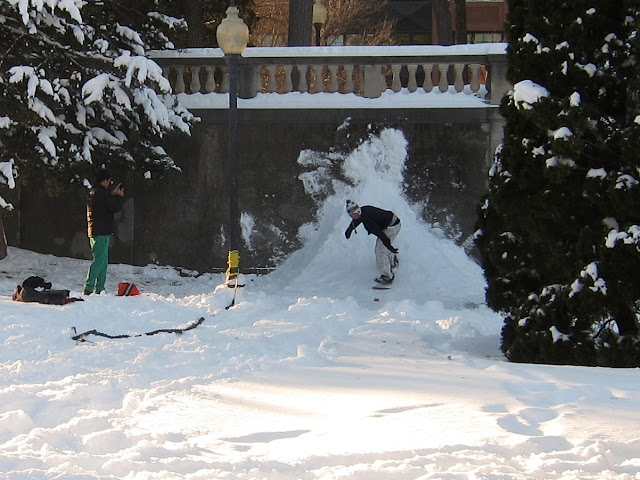 I'm sure once the city's Public Works guys discover what these boys are up to, they will have them dismantle their ramp and take their boards elsewhere.  And that's probably as it should be, considering the damage they might do to that lovely old wall.  But it did my heart good to see these kids so involved in creating their own diversion and having such fun in the snow.  I was almost tempted to ask them to let me try.
Posted by Jacqueline Donnelly at 9:19 PM

Isn't it great to see kids being kids! So many of them today miss out on that kind of fun. Happy New Year!

Husband and I passed some kids, younger than those boys, sledding down a hill in their front yard. We both were so happy to see kids just . . . sledding! All bundled up with rosy cheeks, playing outdoors!

We used to have lots of fun sledding in Congress Park. Did you tell these boys that they were going to be famous by being featured in your blog?! :)