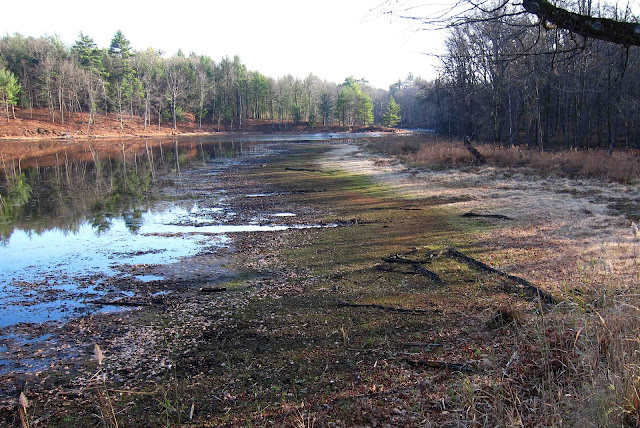 While wandering the shore of Mud Pond earlier this week, I was curious to see what had been revealed when the water level dropped, exposing vast expanses of mud that would normally be under water.   I had previously discovered uncountable multitudes of the floating liverwort Ricciocarpus natans deposited on the shore (see my post for November 17),  but this day I made a new discovery:  curious piles of mud that appeared to have been shoved up from below.  There were no animal tracks in the soft mud surrounding the piles that would hint at what creature had created these mysterious structures. 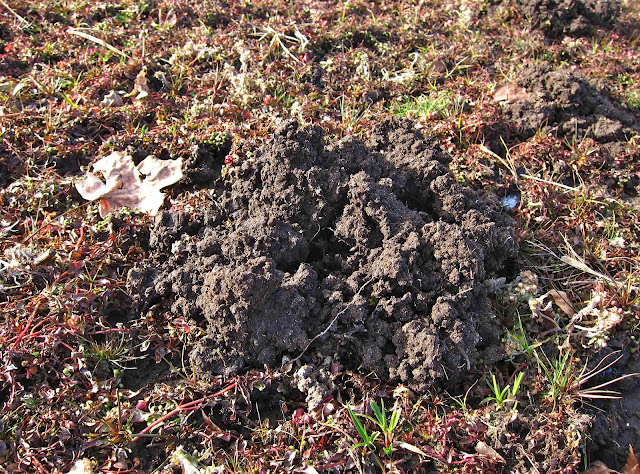 Then I noticed that those piles of mud occurred  in a snaky line that led right up to the water's edge.  What a curious sight! 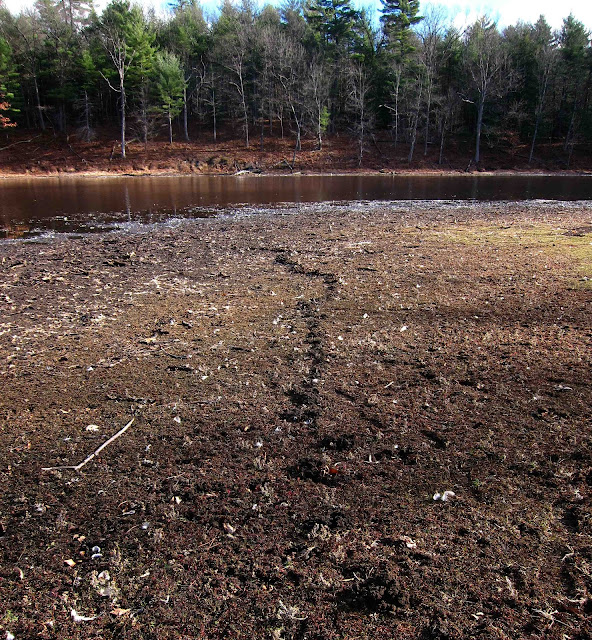 Well, the only creature I could imagine to have tunneled under the mud like this is the Star-nosed Mole.  This was certainly the right kind of habitat, a damp muddy spot rich with the worms and frogs and fish that make up this mole's typical diet.  How I would love to catch one at work, so that I could get a photograph of this amazing little animal.  I probably never will, since they live and feed underground (and also underwater), but at least there are lots of photos on the internet, including this one that I borrowed. 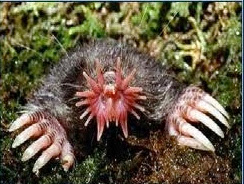 If I hadn't seen photographs from reliable sources, I would have a hard time believing this creature is real, with that fantastic proboscis featuring 11 pairs of pink tentacles centered in its furry little eyeless face.  As I learned from reading several sites on the internet (including this one), that astounding nose is considered the most sensitive organ in the entire animal kingdom, able to process information at near the limit at which nervous systems are capable of functioning.  Operating underground and completely in the dark, the mole uses those pink tentacles to locate and capture its prey at lightning speed, making it what researchers at Vanderbilt University have called "the fastest mammalian forager on earth."  It's also able to use that nose to smell out prey underwater.  Amazing!

Chances are, I'll probably never see one.  But at least I now know where one lives.

Posted by Jacqueline Donnelly at 12:30 PM

I've seen these only a couple times, and that was in the Great Swamp where I worked in NJ. One year the river REALLY flooded and we went paddling through the woods. Found one swimming along and we scooped it up to take a good look. Those were the days looooong before digital cameras, so all I have are the memories. Nifty animals.

I thought "mole," but I never, in my wildest dreams, imagined there could be a creature that looked so like a cartoon! Isn't that just an amazing little animal!

Thanks for the nice post. I will be on the lookout for similar digging. I do hope you see it someday.