Fireworks in the Forest 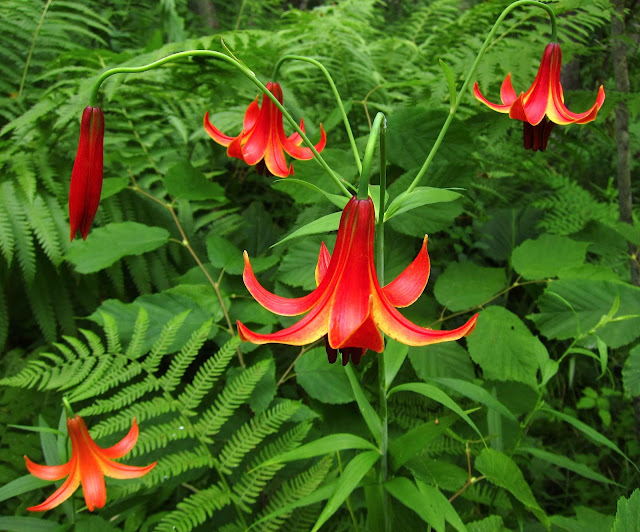 Just LOOK at this explosion of color --  Canada Lilies as red as fire, bursting forth in the dark of the forest, bright as any rocket's red glare! 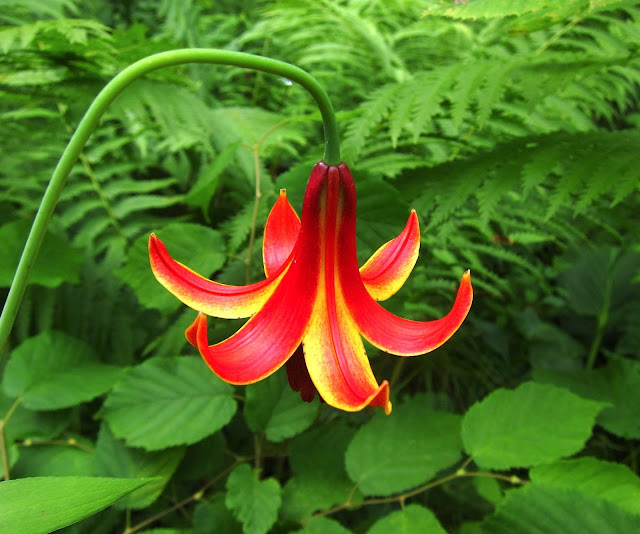 I don't think I've ever seen Canada Lilies of such a brilliant combination of red and yellow (and believe me, I did not boost the saturation).  The most common color for Canada Lilies is orange, and there were plenty of these along Bog Meadow Trail today, as well as others of a uniform yellow.  But oh, those red ones were stunners! 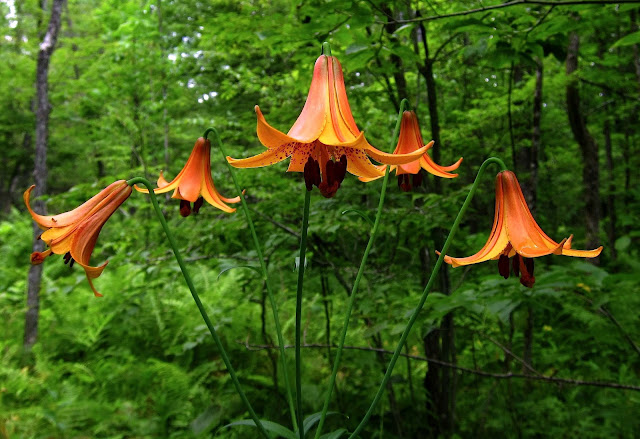 And that's about all the fireworks I would hope to experience today, except that living a block from Congress Park in downtown Saratoga Springs, I'm afraid they are unavoidable tonight.  Whenever I hear those "bombs bursting in air," it always reminds me that my home country had its birth in war and too often turns again and again to war to address its problems.  I do indeed pray that God will bless America, but I also believe that God might be more inclined to bless our nation if only we would stop killing so many of God's dear children who are not Americans.


Ah well, it's a day to celebrate freedom, and so, to do that,  I visited a big patch of Common Milkweed, certain I would find some tiny creatures in need of liberation.  And so I did.  I found several of these little moths (perhaps a Grapeleaf Skeletonizer?) whose feet had slipped into the florets' slits and gotten trapped by the flower's pollinia, tiny packets of pollen connected by strings.  I could see by the litter of hairs on the floret that this little bug had been struggling to free its leg for some time.  I took out my Leatherman tool and, using the tweezers, gently pulled the floret apart until the insect's leg was freed and it promptly flew away.  I was able to help two others in the same way. 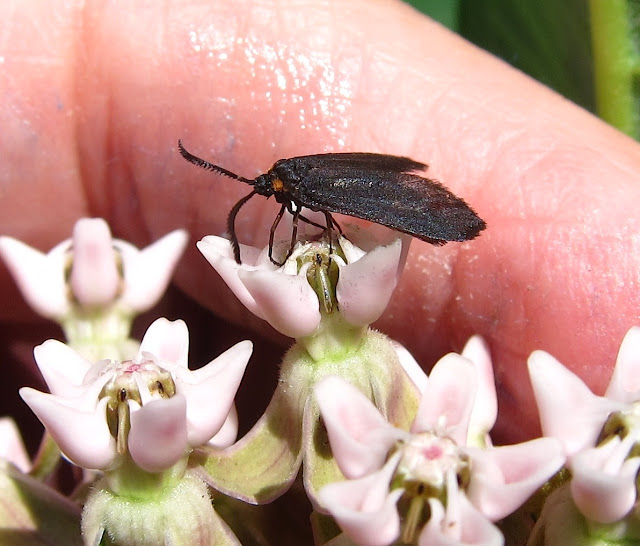 I was trying to figure out how to help this bee without getting stung, when I realized there was no reason to fear, the poor creature was already dead. 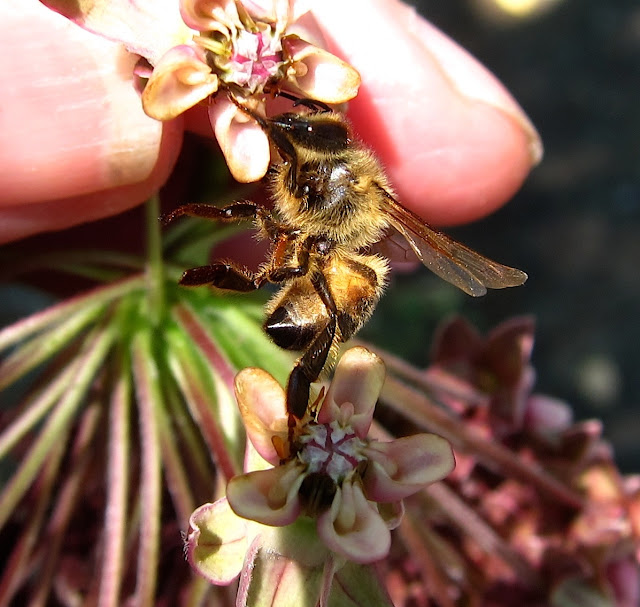 It was caught fore and aft, by two separate florets, and it looked as if it had undergone a terrific struggle, having ripped one leg completely off, while parts of another was missing, too.  How sad!  But a very pale approximation of what happens to innocent children and animals when American bombs fall on their homes.
Posted by Jacqueline Donnelly at 9:31 PM

Those lilies are truly amazing - great photo! As always, I learned something too - never even thought about bugs getting caught in blooms - the bee's 'story': epic as any tale on a grander scale! Happy 4th to you and yours! As for the other part of your posts, I do think we are a great nation - and we'd certainly be greater if we didn't always do what the world has always done to solve problems. Maybe we *could* 'Give peace a chance!'

Yeh, my kind of fireworks!

Read another good one yesterday (July 4): "The love of one's country is a splendid thing. But why should love stop at the border?"

But what about mentioning how the bombs, etc., of Radical Islamists, kill and maim adults and children?

Auntie, I don't have to answer for Radical Islamists' despicable deeds because I am not one of them. But I am an American and therefore I share some responsibility for what my nation does. Islamic terrorists killed about 3000 innocent people in America(including many Muslims) on 9/11. Our nation's wars of revenge in Iraq and Afghanistan have killed hundreds and hundreds of thousands of innocents who had nothing whatsoever to do with 9/11. And that's not counting the torments and deaths of livestock and wildlife, or the poisoning of the land with heavy metals for generations to come. And for what? We will reap what we have sowed. Lord knows how I long to be proud of my country, but over and over we invade other countries (remember Panama, Haiti, Grenada?) and spread nothing but death and destruction. Was it really worth the death of thousands of innocent Panamanians to arrest Manuel Noriega? What did we gain as a nation from that invasion, aside from the enmity of others around the world? How much health care or college educations could we provide for our own citizens, for the cost of just a few missiles? As a nation, our enormous wealth and power could be such a force for good in the world, doesn't it just break your heart to see how we squander it?