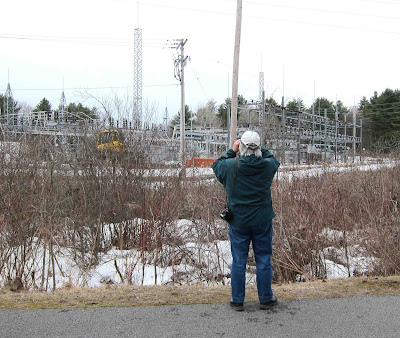 You never know where Nature may grant you a big surprise, as my friend Sue discovered while walking past this industrial site in Queensbury yesterday. She was poking about in a trail-side ditch, listening hard for the mating quacks of Wood Frogs known to reside there, when a raven's odd croak sounded from somewhere in the neighborhood. Searching the tree line, she soon discovered the bird perched on its nest in one of those power-line pylons.
Before long, the raven's mate arrived with a mouthful of sticks to add to the construction. Of course, she had her camera with her and sent me photos last night, inviting me to come out with her today to see how the nest was proceeding. (Actually, I invited myself and she consented. I promised I wouldn't scoop her by posting raven photos on my blog before she posted hers -- which she said she would do very soon. So keep checking her blog Water Lily to see those big birds building their home.)
I didn't get any raven photos anyway, since they weren't at the nest this morning. But I did manage to see the nest. We're hoping the birds soon return. Sue lives nearby, which gives her a ringside seat for observing raven family behavior. 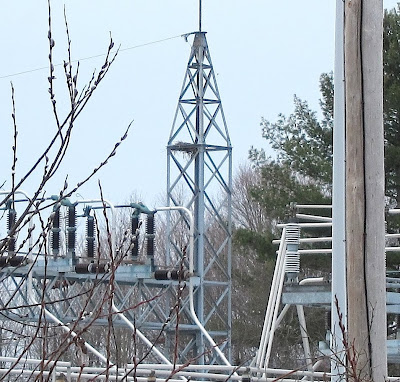 Even though we didn't get to see ravens, we weren't going to let the morning go by without further adventures and so headed up to the Warren County Bikeway north of Glen Lake. 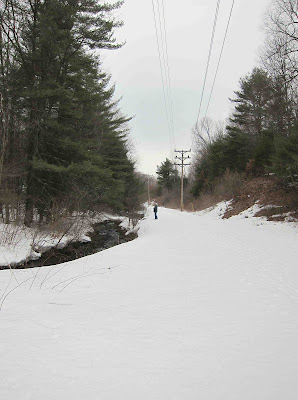 We had some fun flirting with chickadees, but our biggest adventure there was post-holing deep in the snow. 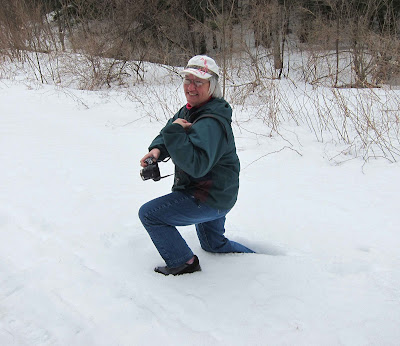 The forecasts are for another foot of snow to fall tonight and tomorrow. Aaargh!!! I hope that forecast turns out to be just an April Fool's joke.
Update, April 1: April Fools! No snow! Hooray!!!
Posted by Jacqueline Donnelly at 9:41 PM

Gosh! all that snow still and more to come, I love when we have snow....but I do think enoughs enough.
I love to see nature ignoring us and getting on with anyway.

Yes, Cranky, Nature will do what she will do and often surprises us by using our constructions for her own purposes. But ravens in pylons are much more welcome than squirrels in our attics. By the way, that snow never arrived. Whew!