Sprucing Up My Tree Knowledge

A few days ago, I posted a photo of this beautiful conifer standing in solitary splendor along Spier Falls Road. Unsure of its identity, I asked for suggestions and received conflicting opinions from knowledgeable people, which convinced me I needed more information than this single photo provided. So back to the source I went. 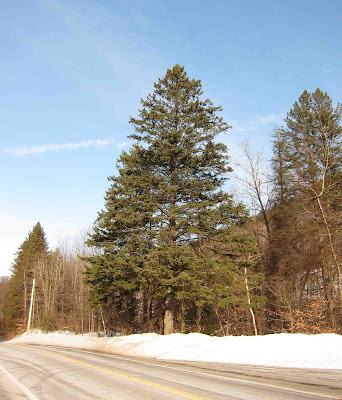 This time when I visited the tree, snow plows had piled up the snow banks so high I was able to scale those banks and reach up to the branches, breaking off a small bough to bring home for closer analysis. I have about a dozen tree books on my shelf, but I decided to start with my three favorites: The Tree Identification Book by George W. D. Symonds, the Peterson field guide Eastern Trees, and my very favorite A Natural History of Trees by Donald C. Peattie.
The first thing I ascertained was that this is a spruce, not a fir, because its needles are four-angled, rather than flat. I really couldn't see this with my naked eyes, but I could feel the ridges when I rolled a needle between my finger and thumb. Then macro photos helped me to see those needles more clearly.
In all the spruces, the needles are borne not in clusters, but singly from woody pegs that tend to grow all around the twigs. In the White Spruce, these needles tend to curl toward the top of the twig, as if combed out and up, as this next photo shows. 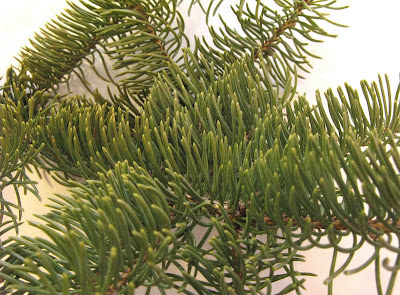 Here you can see the little pegs that connect the needles to the twigs. These pegs will persist on the twigs after the needles fall, causing the twigs to feel very rough. If you click on the photo, you may also be able to see the angles of the needles. 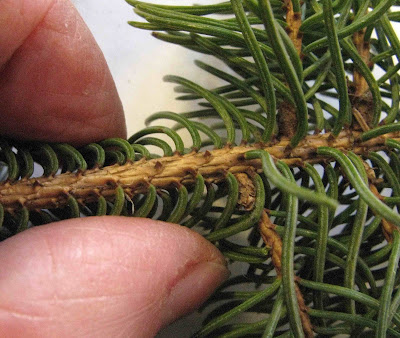 When I laid one of my sample twigs on this page from the Symonds book, I was convinced that my tree is indeed a White Spruce. 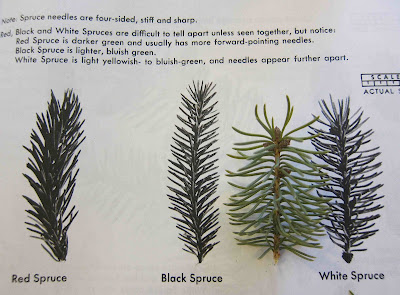 As with all spruces, its bark is not furrowed, but scaly, the scales a grayish color tinged with brown. 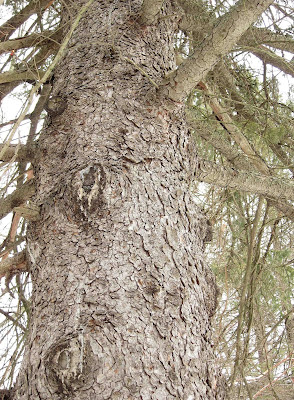 It always mystifies me a little why solving botanical puzzles like this provides me such satisfaction. Is this tree any lovelier now that I know its name? No, it is not any lovelier, but now it stands out as a landmark as I pass along Spier Falls Road. And now that I can call this one by name, I have noticed that many more White Spruces are growing along the road. Trees that were once indistinguishable from the general greenery now assume their identity as individuals. Now I see more as I pass. My world had grown a bit larger. No need to scale the Himalayas nor paddle the Amazon. A walk around the block could continue to surprise me.
Posted by Jacqueline Donnelly at 2:10 PM

You are a very wise woman. There is, indeed, so much to learn in the world right around us. I'm glad you identified your white spruce, and taught all of us what to look for when we are exploring our own world. I'll be on the lookout for them here, though we may be just a bit too far south for it to grow.

thank you for pursuing your quest, perhaps it is not true that
"a cat spruce by any other name would smell as sweet" ...!

And when you bruise the needles, did they smell like cat pee? A classic trait of the white spruce!

Louise and Sue and Ellen, thanks for your comments. I did bruise the needles, expecting to experience that distinctive odor, but smelled only a slight skunkiness, not like the reek that filled our living room one Christmas when we cut down a White Spruce that year. Could there be some variation in the amount of odor?

Someone once asked me if learning to identify things in the wild would destroy the mystery of them, and I didn't know how to answer it at the time, but if I knew that person now, I would answer with your last paragraph - that knowing what you're seeing causes your world to grow a bit larger.

And hi again in the blog world! :)