Inspired by all that open ground at the Saratoga Battlefield yesterday, I thought I'd try some of my other favorite haunts for a walk today, wondering if maybe the snow had retreated some. Ha! Dream on! That stuff is still up to my knees! 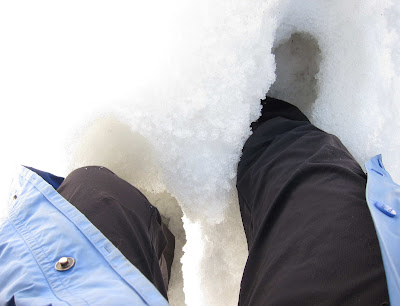 If I kept to the woods, there was usually crust enough to walk on with only occasional post-holes, so I went to one of my favorite woods at the Orra Phelps Nature Preserve. The streams there were running fast and free, but deep snow still heaped the banks. 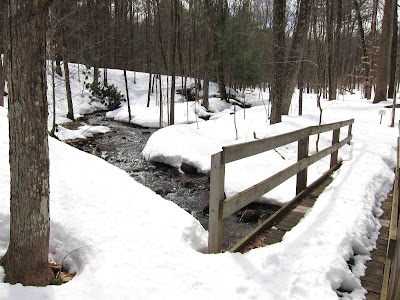 Despite ample sunshine, it hasn't warmed up enough these past days to melt the ice that forms along the creeks in the sub-freezing nights. 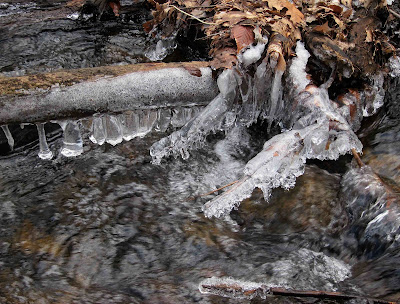 The sunshine doesn't seem able to melt all that snow, but Skunk Cabbage does the job OK. This plant can generate its own heat, which helps to attract early pollinators to the flowers that hide out inside those purple spathes. 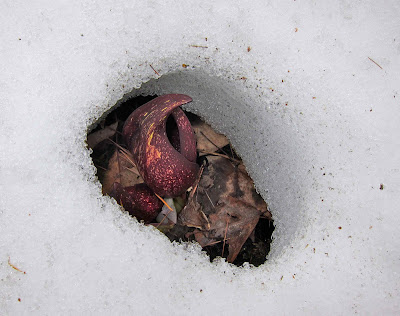 Here's a pretty good shot of that blooming spadix tucked away in its protective hood. I love the elegant curves of those spathes, and also their gorgeous color. 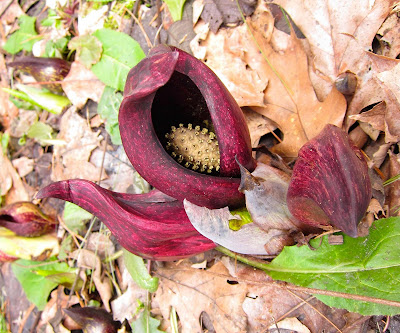 My next stop was Mud Pond at Moreau Lake State Park, where the snow had retreated along its west-facing banks. The snow still lay deep in the woods, however, which made walking difficult, and ice still hugged most of the shore. Poking about in the few little patches of open water, I could find not a single sign of life: no newts or tadpoles or spiders or water bugs -- not even a minnow! 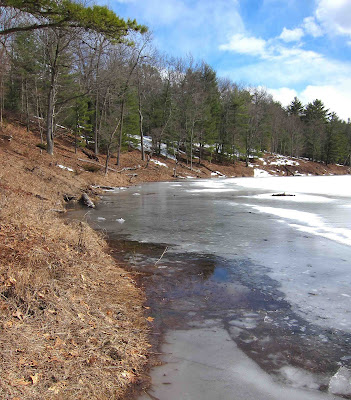 Looking back into my archives for last March, I discovered quite a different scene just over a year ago. Click here to see the comparison.
Posted by Jacqueline Donnelly at 10:47 PM

even with the snow mostly gone - some leftovers from Thursday - almost all is brown and barren ... but I keep looking!

Nothing growing here either, yet. I think, sadly, that last year was the exception, rather than the rule.

Hello, Just visiting you from somewhere else - what lovely photography on your blog! I've read through several posts. I hope your snow melts soon. I live in the mts of CO, and mine will stay on the ground through May. Happy spring to you!

Beautiful photos! My dog and I caught some sun and signs of spring today too, but not looking forward to mud season.

While we don't have any snowcover any longer, our daytime highs in central PA are 15 degrees F below normal, and lows in the upper teens -- clearly not end-of-march normal temps. I'm sure the lack of snowcover may be particularly damaging to some exposed plant tissues. It looks to last for at least a week!!

hikeagiant, I'll keep looking for green stuff along with you on your CT blog. I think you will find it before I do.

Hi Louise, you are right about last year the spring coming early. Everything bloomed about 2 weeks ahead of normal, consistently through the summer, too.

Welcome to the Adirondacks, Barb, and thanks for your kind comment. So good to meet you, and I hope you enjoy your visit. I remember passing through the Rockies in July and the passes were just open. So I shouldn't complain about all the snow, should I?

Hello Sandra, nice to hear from you. Yeah, mud can be nasty, the price we must pay for the glories of spring.

Hi catharus, I'm surprised to hear how cold it has been down your way in Pennsylvania. Nice to hear from you.