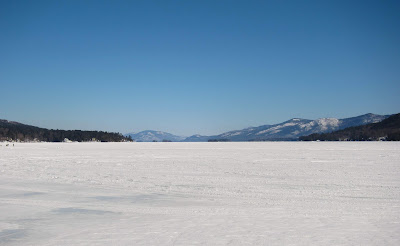 Zero this morning. Most folks would think it was not a good day for the beach. But that's where my friend Sue and I went today, to check on a marshy area near Lake George where Wood Frogs will soon be croaking their courting songs. All they need is some open water. When I checked back through my blog posts for last March, we found the frogs in full voice last year by the third week of March, even though there was still lots of ice at the edge of the marsh. It's possible that will be the case again this year, although today the marsh was frozen over completely. As was the lake. The ice out there was still thick enough to support the weight of trucks. And the wind off that long sweep of lake made our cheeks so stiff we could hardly talk, let alone croak back to the frogs, as we did last year (see here).
Excursion boats were parked at the docks, the water around them kept open by bubblers. This boat is named the Lac du St. Sacrement, which was the original name for Lake George, before the English defeated the French settlers and named the lake for their king. 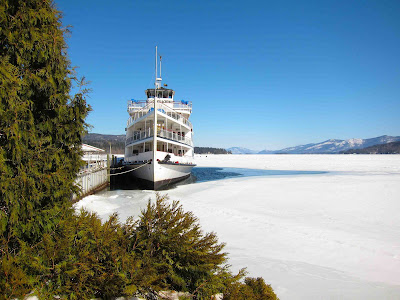 There weren't too many tourists today, to enjoy the view from chairs set along the dock. 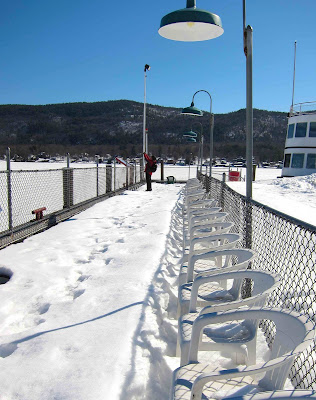 I think the sky is never so blue as on cold winter days, especially when contrasted with the startling white of birches. 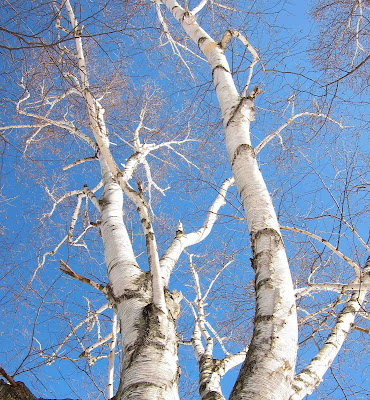 Aha! We did find some open water in a stream running into the lake. Lots of Mallards had found it, too, and were murmuring among themselves. One drake/hen pair appeared to be kissing, as they clacked their beaks together in what looked like a mating ritual. Sue tried to get a photo, but you can see the pair flying off into the sky. 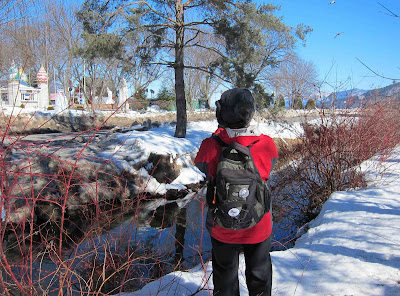 Sue also hoped to get a shot of an immature Bald Eagle she spotted flying over the trees. But it disappeared against the forested backdrop of the mountains before she could capture its image.
Lake George is surely one of the most beautiful natural areas of the world, if you keep your eyes on the lake and mountains and sky. The beachside attractions, however, offer amazing vistas of an entirely different kind. Here, Paul Bunyan stands guard over a crazy quilt of structures representing a very unlikely mix of cultures. 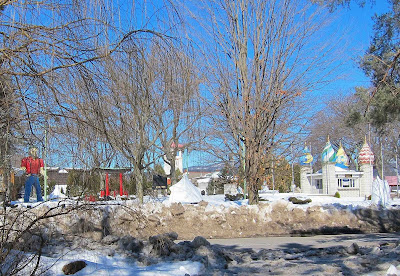 Posted by Jacqueline Donnelly at 8:00 PM

You are . . . stalwart! to have been out in the wide open air yesterday!

How lovely to have seen the ducks courting, and anytime I see an eagle the sight positively thrills me. The [retired muffler-holder] Paul Bunyan and the colorful minarets . . . not so much.

The natural parts of Lake George seems to me to look exactly as they have for millenia. I like that.

Wood frogs, eh? I wonder if we have them around here? I'll have to check and see, and, if we do, I think a trek down to the bay might be in order in a couple of weeks. I had no idea any of the amphibians awoke so early.

Lake George is very beautiful, but I think that Winter might be the best time to see it, before the hordes of tourists arive.

I enjoy the Lake George area too. Very scenic. I get to go on the boat ride with the 8th graders again this year too.. maybe. I might skip it though. :)

Thanks for your comments, June and Louise and ADKgal. When I go to Lake George, I usually head up to Bolton Landing and north, where the scenery is exquisite and the traffic is much lighter. As for the Wood Frogs, they start to sing quite early, even while ice remains in part of the marsh. We found them last year about the third week of March.