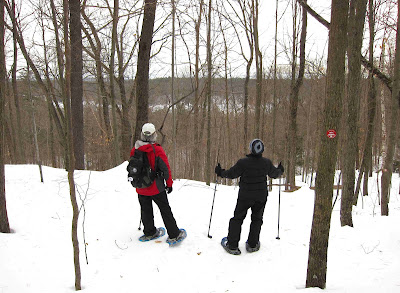 One of the things I love about my friend Sue is her willingness -- nay, eagerness! -- to return to the same nature sites again and again. As we are agreed, there's always something new to see in ever-changing nature, and our delight is only intensified when we have a new friend to show our favorite sites to. Today we brought our new friend Pat to the porcupine dens high in a ridge above Moreau Lake. Pat's a frequent hiker in Moreau Lake State Park and knows most of the trails there very well, but she had never visited this particular location.
It was a great day for a hike, not too cold, no wind at all, and with a moment or two of sun now and then. The snow was nicely packed as we started up the Red Oak Ridge Trail, although we definitely needed snowshoes when we left the official trail and headed higher up to where the porcupines den among enormous boulders. Our first sign that we were approaching the site was this mess of hemlock boughs littering the snow. I've placed an arrow in the photo to show the well-trodden trough the porcupine takes to its feeding site in these trees every day. 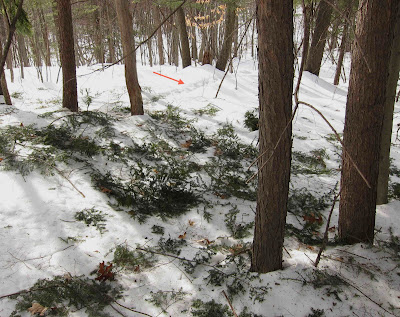 We promptly found the cave where we knew that porcupines had denned in the past, and it was evident from the packed and pee-stained trail leading in and out that Porky was still living here. 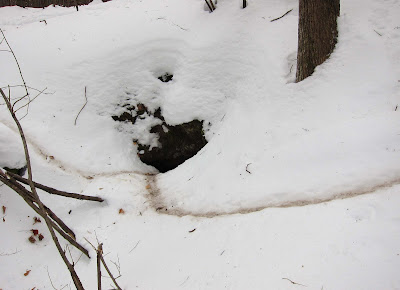 I was going to approach the mouth of this cave and peer in with a flashlight to see how far down and back the cave extends (and also to see if Porky was home, since we couldn't see any in the trees). But the snow was quite slippery here, and I sure didn't want to go sliding down, down, down, down to where I would land, God only knows. Plus the smell was quite a deterrent. So I backed away without peering in. 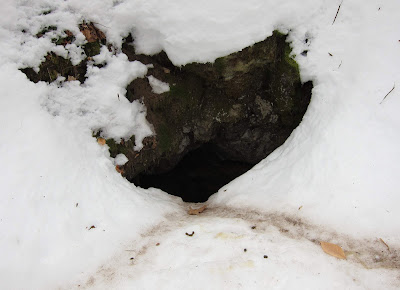 There were lots of signs all over the site revealing Porky's recent passage. I didn't find any quills today, but lots of hairs and woody poo pellets. 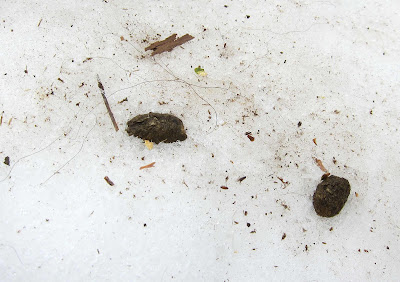 Other creatures had left signs throughout the woods. We found many tracks left by fishers, the porcupine's only predator, as well as numerous holes in the snow surrounded by acorn shells. The squirrels must have eaten all their nest-cached nuts by now and are beginning to dig up their buried treasures. Looks like this squirrel had secreted quite a hoard! 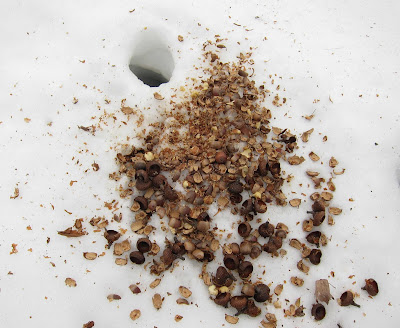 Isn't it some kind of miracle that a squirrel can find a cache that was buried months ago and is now covered over with at least two feet of snow? Amazing!
Posted by Jacqueline Donnelly at 8:45 PM

What great finds! Lucky you!

Some kind of miracle, indeed!

Well, I'll be! I wondered why my pine tree near the woods always loses tons of branch tips over the winter. Could it be I have a porcupine nearby?

The squirrel hole, with its discarded trash, is amazing. I think the squirrels around here are too dumb to remember where they stashed their hoards because I never see anything like that.

Great photos and a nice post! I love watching the squirrels, they are so smart. I actually built a wooden box with a lid on it, hinged, for the peanuts. I'd read that the squirrels would eventually figure out how to open it, hold it open with one paw, and grab a peanut with the other. And they are doing exactly that. It's so fun to watch!

Wow, I'd like to see that! I love that your blog takes one relatively small area and shows how much there is to see if you go often and look closely.

I've never seen a porcupine in a den and the foraging of branches like that.

I look up in the trees for porcupines. I've got a healthy population around here. 2 old hollowed out maple trees, 3 big hemlocks and a patch of smaller hemlocks shelters about 7 porkys within a half mile radius around my house.

It's fairly easy to spot a porcupine tree around here.
- the scattered droppings under a hemlock are a sure sign one is curled up out on a branch.

- the maples are porky condos and the dropping are a huge pile around the base of the tree.