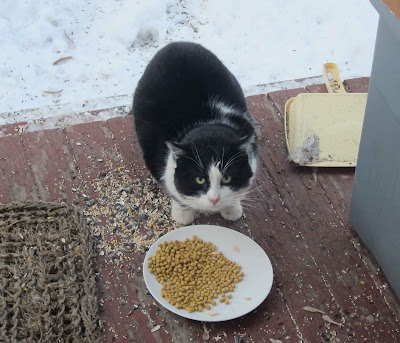 Harley's back, and he's eating like there's no tomorrow. Which there may not be, considering that he's a feral cat and a really wild one who won't let us even come near him, let alone pick him up and bring him inside where it's safe and warm. We thought he might have frozen to death or been trapped under a building by falling snow or shut in some shed where he had taken shelter. We hadn't seen him for over a week. But then, much to our surprise, he showed up at our doorstep last night. For months now, we've been putting out food for him when he showed up twice a day. He always tears off to a corner of the yard when we open the door, but comes back to eat once we go back inside.
We've considered trapping him and taking him to an animal shelter, but he's such a wild cat I doubt he could ever be socialized as a pet, which means he would probably be put to death. Would that be kinder than leaving him to fend for himself outside for the rest of his doubtlessly shortened life? I don't know. In the meantime, we give him lots of food when he comes around (hoping he'll thus be less likely to hunt our birds), and he drinks from our electric birdbath. My husband even built him a snug insulated cat house, but he won't even go near it. We think he lives under a neighbor's closed-up house. 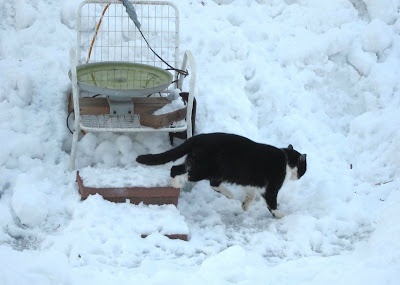 We called him Harley because of his harlequin markings, and also because he looks tough and hardened like someone who might ride a Harley. We sure wish he weren't such a loner because we would love to give him a home. Our three house cats observe him through the screens in summer and don't get all hissy about him coming around, but they might not be so welcoming if we got Harley inside "their" house.
Posted by Jacqueline Donnelly at 8:01 PM

Harley is a lovely cat. I'm glad that he came back! You wonder how they survive in this bitter cold weather. Funny, I looked out last night and saw my feral cat, that I was also worried about, eating his fill. Also funny, he's also a black and white tuxedo cat.

It's a pleasure to read of your returning visitor. You have a kind heart. Sometimes the old adage applies that "All we can do is all we can do." I'm happy that he's come back and that you are doing what you can.

that's a wonderful setup for the water - perhaps some morning you will look out the window and see Harley sitting IN it like his own personal spa !

I bet if you shaved his foreleg you'd find a tattoo that reads "MOM", within a heart, of course.

Phew. Give him time....he may change his mind. I speak from experience.

Thanks, all you cat lovers, for sending your kind comments our way. I'd pass them along to Harley, but he runs when I open the door.

Sue, I very much doubt that Harley would ever enjoy a relaxing bath. I've never had a cat that didn't HATE getting wet.

Very funny, Ellen. And don't I wish I could soften his heart enough to trust me.

Yes, Diesel, we will keep trying to ease Harley's fears. But we've been feeding him regularly since the summer and he still treats us as if we were axe murderers.