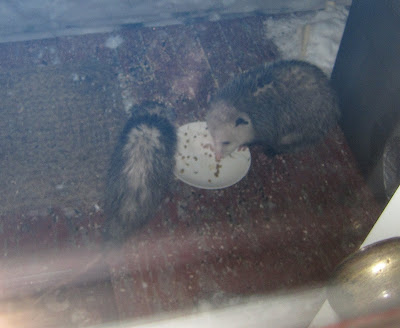 We've been visited nightly by opossums this winter, especially since we've been leaving food out on the porch for a neighborhood feral cat. I fear for that cat, since we haven't seen him for nearly a week and he used to be a twice-daily visitor. The last few times we saw him he was limping and licking his paws. It's likely he suffered from frostbite during those fiercely cold nights. We set up a shelter for him, but he is a truly wild cat and would never even go near it. Our best hope is that some kind soul managed to trap him and deliver him to an animal shelter. Or he may have gone in a garage and been locked in. Or he may be dead. Feral cats have a hard life out there.
Opossums, too, which are southern natives not fully evolved to endure our bitter winters, often suffer from frostbite to their naked tails and ears. But these native marsupials seem to thrive here, nevertheless, since we have been visited by them most of the years we have lived here. And that's 40 years, including many really bitter winters. We used to get raccoons by the dozen, too, but they must have all died out in the rabies epidemic a decade or more ago.
Opossum footprints are kind of cute. The front foot looks like part of a daisy, or like a child's drawing of a sun. The hind foot has a long "thumb" that sticks out to the side. The two feet overlap in the prints they leave in the snow. 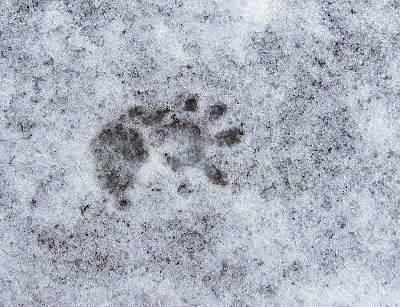 Posted by Jacqueline Donnelly at 8:44 PM

Ohhh, I haven't seen my feral cat in a while either. Fascinating that you have possums that will come so close to the house. They're around here, but are very shy and seldom seen.

Wanderer cats do live a tough life. My people brought a hardened wanderer inside once. He was a good guy, from what I hear. It's good that you feed them, but I think trying to bring them in is important too...a tough assignment. I was briefly a wanderer myself...

Precisely why I reminded our friends at NCPR to tell folks to bring their critters in. Only thing worse for a cat than being a wanderer (which is a choice), is having a home and not being kept safely inside of it except for supervised outings. I hope your cat friend got brought in.

Oh no! Dad must be upset about the missing cat. :(