The Last Flower of Summer 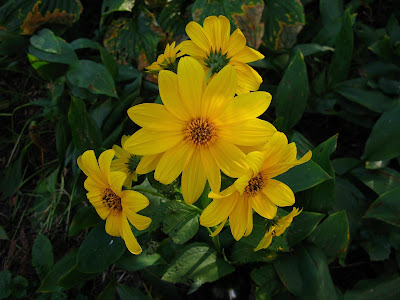 The regional wildflower season goes out in a blaze of glory with the sun-yellow blooms of Jerusalem Artichoke (Helianthus tuberosus). Although this handsome plant can be distinguished from similar sunflowers by its large flower head, hairy stalk, egg-shaped rough leaves, and long-pointed bracts, I don't have to look that closely to know it when I see it. It's simply the only big yellow flower that bursts into bloom this late around Saratoga.
Its common name is actually quite a misnomer: a native plant, it did not arrive on our shores from the Holy Land, and although its rough stems and leaves may feel a little bit prickly, it's not related in any way to artichokes, which are a kind of thistle. This plant's Latin name, however, does provide a clue as to what distinguishes this sunflower from others of its genus: the tubers that form on its roots and which provided a staple food for early Native Americans. When the French explorer Samuel de Champlain first tasted these tubers in Massachusetts back in 1605, he declared that they tasted something like artichokes, so that's where the artichoke part comes from. The Jerusalem part? Most likely from the Italian word for sunflower, girasole, which means "turns with the sun" and kind of sounds like Jerusalem.
A few vendors at our local farmers' market offer the tubers for sale, so I bought some once to see how they taste. Ehhh . . . I think I'll stick with potatoes. But then, I'm not too fond of artichokes, either.
Update: My friend the plant expert Ed Miller has given me another clue to identifying Jerusalem Artichoke. He tells me that this plant has mostly alternate leaves, while most other sunflowers have opposite ones. Ed also noted that Newcomb's Wildflower Guide mistakenly shows it on a page keyed to opposites. Thanks, Ed. It's really great to have a walking plant encyclopedia as a friend.
Posted by Jacqueline Donnelly at 10:31 AM

Many years ago, when I moved to NJ, I left several plants at my parents' house (in their garden) for safe keeping. Mugwort was one (it took over in a big way) and Jerusalem artichokes were the other (I told Mom that they were good food, although I never ate one myself). Over the next several years, they worked diligently to eradicate these vigorous growers from their garden. Finally they succeeded. I never see a J.A. that I don't think of those sadly misplaced plants of mine.

Do they grow along the roadside? On our recent trip to the North Country, I kept seeing bright yellow flowers along the road. Unfortunately, my fellow traveler was not a big nature fan, and I couldn't convince her to pull over so that I could get some pictures.

Ellen, I can understand why you might want to safekeep your Jerusalem Artichokes, but MUGWORT? Actually, I do kind of admire that prolific plant for its pretty chrysanthemum-like leaves and intensely aromatic smell. I wonder if they could make an insect repellent from it.

Hi Louise, it's hard to say if what you were seeing along the road was J. A. or any of the other tall sunflowers that line our roadsides in late summer. They certainly could have been. My sympathies regarding your traveling companion. So many folks just don't appreciate all the wonders that surround us.