Wandering Along the Rocks

Snow? What snow? We had some two days ago, but the ground is bare again. Oh well. At least the walking is easier without it. I headed out to Skidmore today, to where the paved part of Broadway ends and the deeply rutted remains of an old dirt road continues on through a woods. There are steep rocky banks both above and below this road, and the rocks are covered with lichens and mosses and all kinds of limestone-loving plants in the spring and summer. I wondered what I might find growing there in winter. 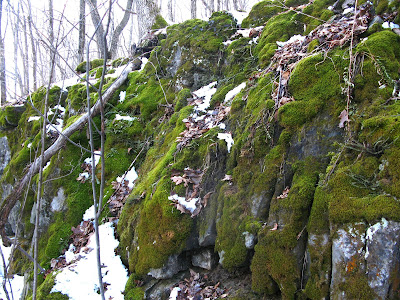 All kinds of cool stuff, it turned out. First of all, there's the moss itself, in various shades of lovely green, and viewed up close, in many different shapes. Here's feathery and spiky.

Here's some that looks like tiny green dahlias. In all the expanse I searched, maybe a quarter mile of mossy rocks, I found this flower-like form in only two locations. (Update: My moss-loving friend, Evelyn Greene, has identified this as Rhodobryum roseum. )

There was one small patch, about three inches across, of this bright orange fuzzy stuff. Is it a moss? A fungus? A lichen? A slime mold? I just have no idea. But it certainly caught my eye. You can see it in the first photo above, down near the lower right corner of that rock wall. 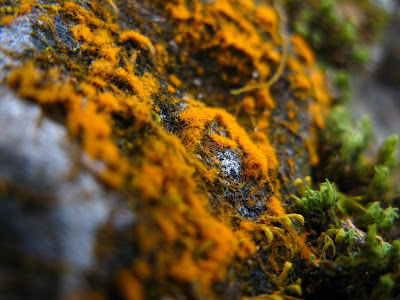 Tucked in the crevices of the mossy rocks were many plants of Maidenhair Spleenwort. This evergreen fern is considered "exploitably vulnerable" in New York and is thus protected by state law. It seems to have made itself quite happily at home among these rocks. 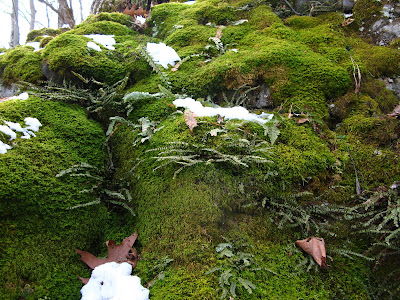 There were other evergreen plants, as well, including this clump of Plantain-leaf Sedge. It looks like new growth is sprouting up there in the center, getting a jump on spring.

Likewise, this Herb Robert looks to have put out little new leaves, ready to start making food for the plant when warm weather comes. See how its stems and leaves are covered with fuzz, as if they were wearing warm woolies to protect them from winter's cold. 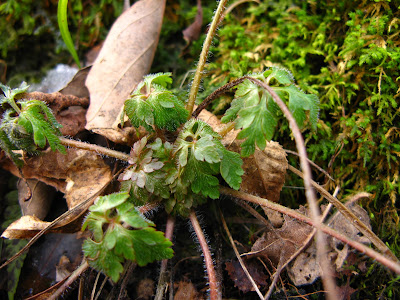 The rocks where I found all these plants are pretty interesting in their own right. Here's a boulder that appears to have been sheered off, revealing the complex and convoluted texture of its makeup. Some parts are rough and gritty and much eroded, others smooth and hard and shiny, including those parts that are colored a steely blue. 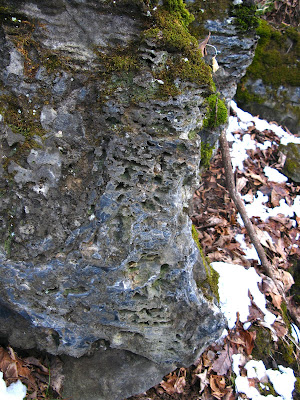 I found a bagel-sized slice of that rock lying along a ledge, so I brought it home to examine it further. Now I've got to find a geologist who can tell me this mineral's story. I'll bet it's a good one. 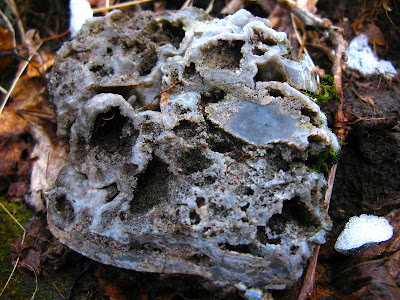 Posted by Jacqueline Donnelly at 11:28 PM

Ooo - can't wait to hear about the rock. As many times as I've learned geology and rock stuff, I just don't seem to be able to retain it!

I'm surprised your snow is mostly gone! With all the snow you've been getting, I thought for sure you'd have more than us. We have finally gotten about an inch of new snow...first "big" accumulation in quite some time. So far February is looking even drier than January was.

Cool rock. Yes, do let us know when you find out about it. Looks like a lot of geodes globbed together.

Did you see any snail shells? In WV I find lots of them on the limestone clifts. They often get washed down to the bottom of the rock or in crevices.

Great rock and the moss pictures were heavenly!

Have a good weekend!
nutMeg.

(I can't believe "youguys" are still happy about snow. I think it's that blow to the head you took when you fell.)

Head to the NYS Museum this weekend. The State geologist will be on the fourth floor both days for the Rock and Mineral Show. and the first level has "New York in Bloom" with some very cool arrangements.

Your orange fuzz is actually an algae, Trentepohlia. I had the same questions and solved it using a lichen key. Here's how I solved it:
http://bmscblog.wordpress.com/2012/09/21/if-it-looks-like-a-lichen/

Your orange fuzz is actually an algae, Trentepohlia. I had the same questions and solved it using a lichen key. Here's how I solved it:
http://bmscblog.wordpress.com/2012/09/21/if-it-looks-like-a-lichen/