More Finds in the Marsh

I went back to the banks of the Hudson today, hoping to find more clues to the tracks that had me so puzzled yesterday. It was not so sunny today, but pleasant enough, and beautiful driving along Spier Falls Road, where the open river reflected the mountains and islands. 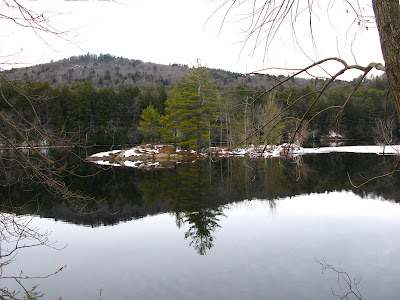 In the bays and marsh behind Three Pine Island, the ice is still frozen solid. In the woods that surround the marsh, the snow is frozen solid enough to walk on without snowshoes, and it's covered with just a dusting of softer snow that reveals the animals' footprints pretty clearly. I promptly found the trail of prints that puzzled me yesterday (are they otter or fisher?), and followed them further into the woods. I did find this trough in the snow that looks like the kind of slide that otters make. 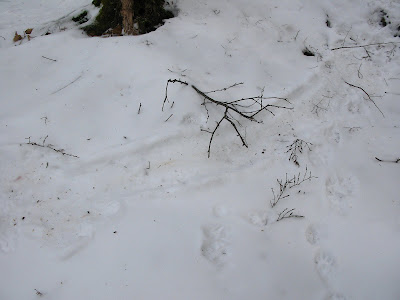 But only one. And not a very long one. (See my blog post for January 21 for really clear evidence of otter slides.) There weren't any fresh tracks today, so whoever was here yesterday has apparently moved on. And I'm still as unsure as ever.
There were lots of coyote tracks in the woods, and they left me with no doubt about what they were up to. Especially when they make such a mess where they're eating. 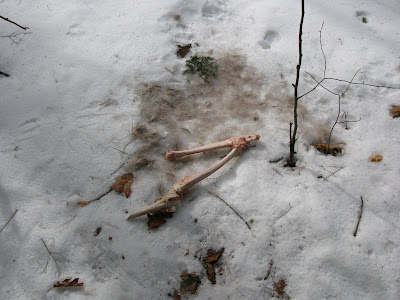 Not all the puzzles are animal ones. I found this stalk of dried seed pods today and wondered what it might be the remains of. Looks like a bunch of little PacMen, with mouths wide open. And also like the bracts of Turtlehead, which I know grows back here in the marsh. I'll bet that's what it is. 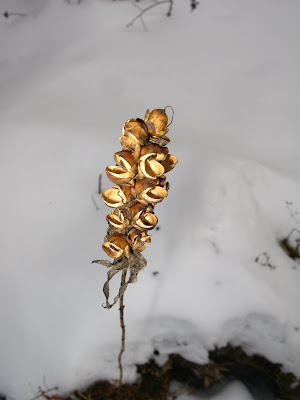 I don't know the name of this moss whose spore stalks were poking above the snow. I have a friend who is trying to teach me the names of mosses and liverworts and lichens, but I haven't progressed very far in my education. Whatever its name, I thought it was really pretty. 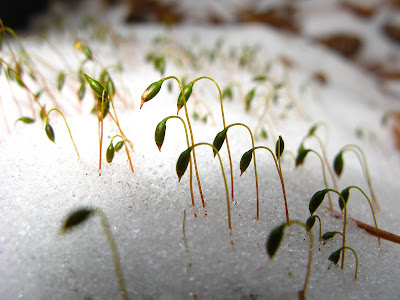 Posted by Jacqueline Donnelly at 9:45 PM

I'm never seen moss poking up through the snow like that - really cool. Nice photo.

Thanks, Garden Lily. I too was struck by the sight. I know that mosses stay green all winter, but I'd never seen the spore stalks so perky this time of year.

Little PacMen--- a wonderful photo that would be fun to work into a photolithograph....