Too Hot for Hiking! But Not For Botanizing by Car.

I read that a runner died from heat stroke this week while participating in a race.  And sadly, it was no wonder!  The course had contestants running up Whiteface Mountain, one of the highest peaks in the Adirondacks. Not just once but several times, and in temps that approached a super-humid one hundred degrees!!! Not my kind of fun.

Botanizing is my kind of fun, but the heat was even too much for my usual habit of ambling through shaded woods, covering maybe a hundred yards in an hour.  But there were flowers I just had to go find, or they would bloom and fade before I could greet them.  Luckily, these flowers grow just a short walk away from where I could park my air-conditioned car.  So off I went.

My first destination was Orra Phelps Nature Preserve in Wilton, where I knew a gigantic shrub of Rosebay Rhododenron (Rhododendron maximum) spread its branches low over a little creek.  As soon as I rounded a curve in the trail, I could see one of its spectacular flower clusters lit up by a stray ray of sun, virtually glowing like a beacon in the dark shade of the woods. 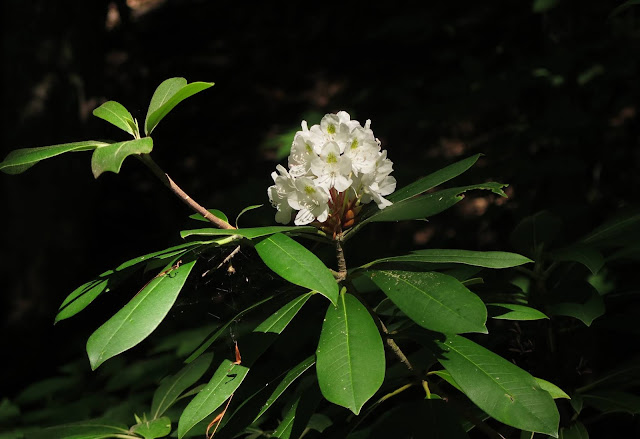 Although the New York Flora Atlas shows this species of rhododendron as widespread throughout the state, I have found it in only two places in Saratoga County, and the chances are good that its presence at Orra Phelps Nature Preserve is due to Orra having planted it here herself.  If so, I'm awfully glad she did, for I love these gorgeous flower clusters, held erect on pink pedicels and with patches of mottled green on the upper petals of each bloom. 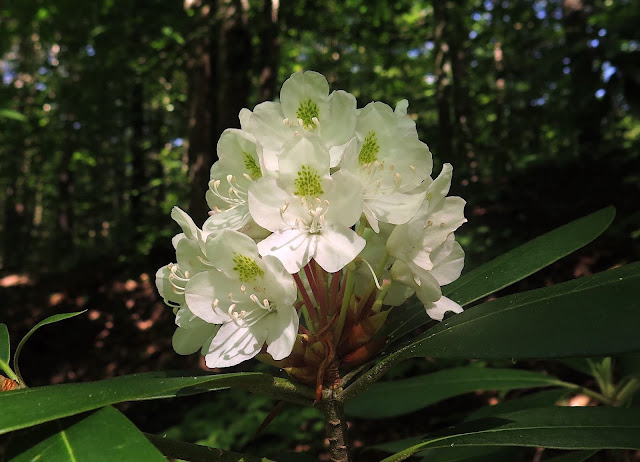 My next destination was Outlet Road at Ballston Lake, where I knew I would find a patch of the wee little roadside weed called Centaury (Centaurium erythraea).  This is a very tiny flower, barely a quarter-inch across, but its brilliant hot-pink color makes it easy to spot among the mowed greenery  in the sandy verge lining the sun-baked asphalt road.  Even though the New York Flora Atlas's  distribution map indicates that this little non-native flower is found in very few New York counties (and NOT in Saratoga County), I believe that is just because no professional botanist has bothered to collect, press, mount, and document such a common no 'count alien weed.  So just to set the record straight, I collected a specimen today to send off to the New York Flora Association.  Wee and non-native this flower may be, but I think it's adorable. 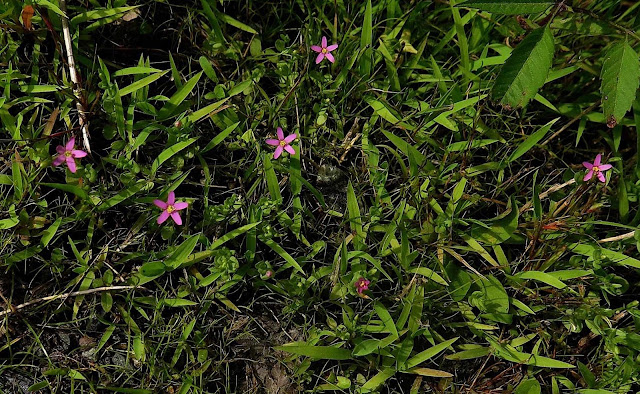 Here's a close-up look at this tiny but vividly colored flower. It has always intrigued me that Centaury's male and female parts are arranged side-by-side like this, instead of the stamens surrounding a center pistil, the usual arrangement for most flowers that contain both sexes.  Hmmm. . . .  Very interesting! 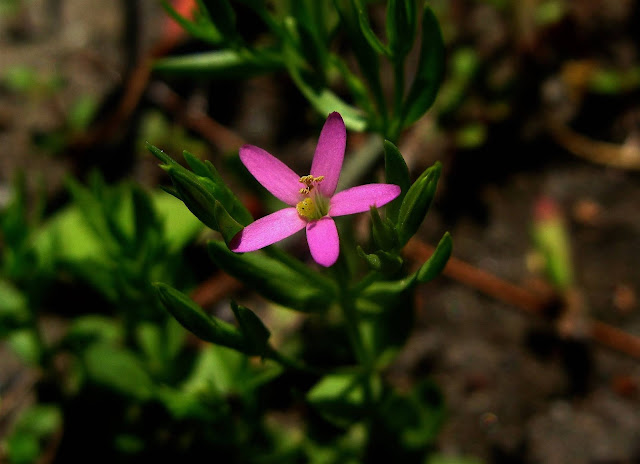 Posted by Jacqueline Donnelly at 10:52 PM

Agreed, too darn hot for almost any activity.