Something Rotten in the State of Lilies 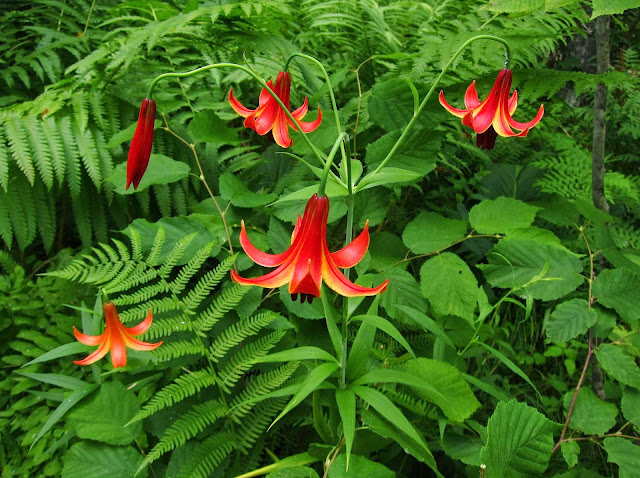 It's the Fourth of July, my nation's birthday, but also the time I go looking for Canada Lilies (Lilium canadense) with their flowers as bright as bombs-bursting-in-air.  So out to Bog Meadow Brook Nature Trail I went yesterday, hoping to find some in bloom.  (The photo above was taken on the first week of July on another year.)

I usually find Canada Lilies almost as soon as I enter the trail from the Rte. 29 entrance, often with multiple blooms dangling in a carousel from tall stems.  But search as I did, I found only one plant, with only a single bloom at that, in the hundred yards or so I walked the trail.  And that one was not yet open.  Oh well, I thought, most flowers are blooming late this year, what with all the cool rainy weather we've had. 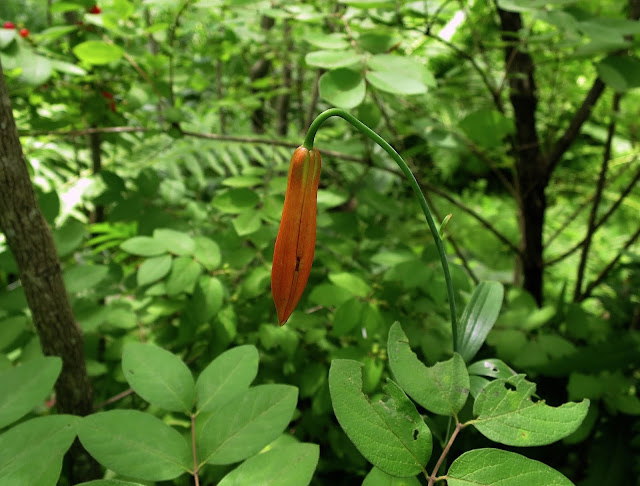 I continued on the trail, wondering why I wasn't seeing more plants with dangling buds.  And then I did see one.  But this one did not look right.  Chunks of the flower buds had been chewed off, and slimy, poop-colored blobs were clinging to the outsides.  Few leaves remained on the stalk.  Uh oh, this looks bad! 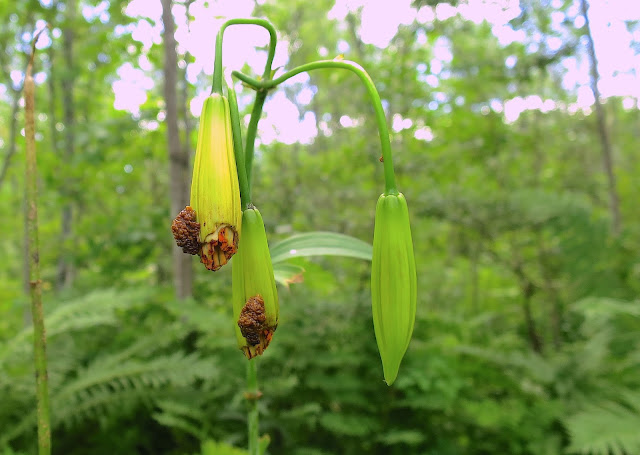 Bad news, indeed! I collected one of those slimy blobs, wiped off the icky crud, and discovered this creature, which a Google search revealed to be a lily-lover's worst nightmare, the larva of the Scarlet Lily Beetle (Lilioceris lilii) , a very destructive pest. 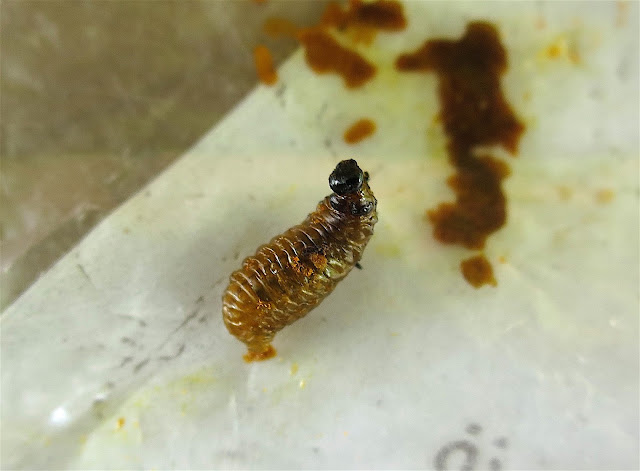 Here's a photo of the adult, which I found on Google, where I also learned that this destructive pest, indigenous to Europe and Asia, was first seen in Massachusetts  in 1992 and by 2012 had spread to all New England states as well as New York. 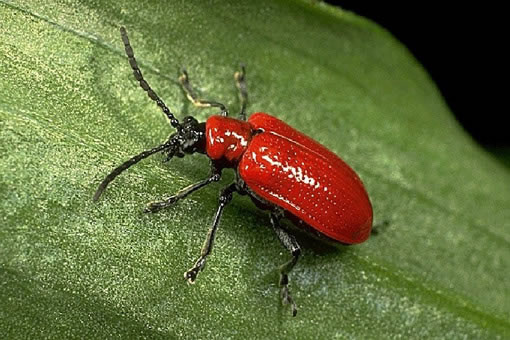 The larvae are the first visible signs of infestation, as they consume first the leaves of the lily and then the buds, covering themselves with their own excrement as protection from the weather as well as predators.  Unfortunately, these beetles have no natural predators or parasites native to the U.S., but there has been some success in reducing beetle populations with the use of biological controls, including the introduction of European species of parasitizing wasps.

I doubt very much, though, that those parasitoids have been released at Bog Meadow Brook Nature Trail.  So I suppose this means the Canada Lily population there will soon decline.  So sad!  Well, I wasn't feeling all that sanguine about the state of my nation on this Independence Day, either.  Unhappily, this seems like an all-too-symbolic find on the Fourth of July.
Posted by Jacqueline Donnelly at 1:18 AM

The lily leaf beetle is very destructive here in Ct I had to pull up all my lilies because I could no longer care for them without using pesticides. I used to try catching the beetles but they are fast and just drop to the ground where they hide.
Sorry to hear they reached your area.

So sad...we discovered them here last year and no matter how I try they are wiping out my lilies, wild and tame.

More proof that we're homogenizing the word's flora and fauna. Of course, the worst invasive pests of all are those of us of European and African ancestry -- but for us the other invasives wouldn't be here.

How sad! My first experience with the Lily beetle was 3 years ago when I noticed my Asian lilies being devoured. I now consider myself it's natural predator squishing the miserable little things wherever I see them!

Yet another introduced pest "indigenous to Europe and Asia." Obviously we need to contain them with a huge wall. Surely the Europeans and Asians can be persuaded to pay for it.