No Eagles, No Fish, But Who Cares? 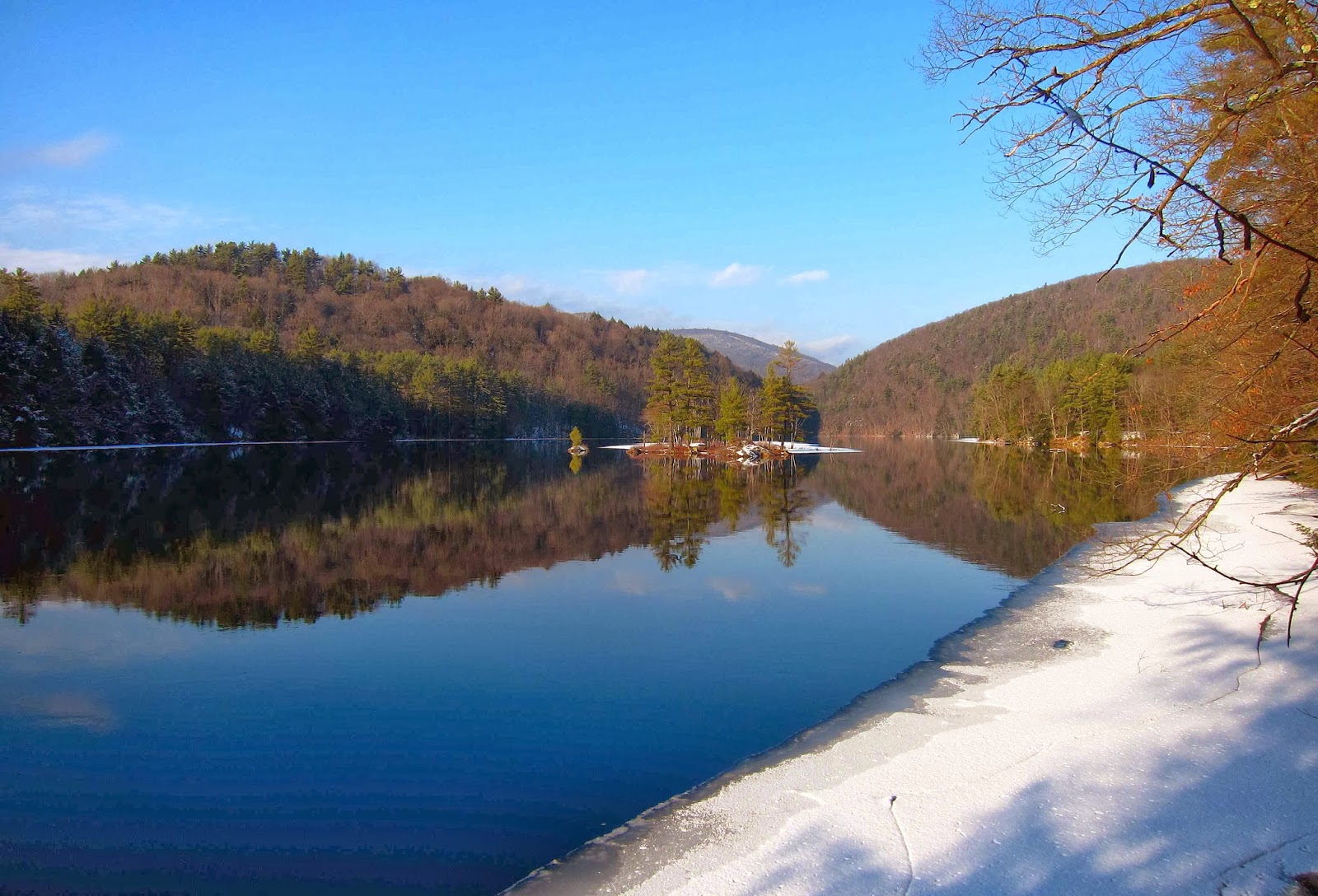 I'd heard so many recent reports of Bald Eagle sightings at Moreau Lake State Park, I thought I'd head over there today (Friday) to see if I might catch a glimpse of these majestic birds.  The most likely place to see them was along the Hudson River, especially since long stretches of open water now give the eagles access to good fishing.

Well, I didn't see any eagles along the river today, but oh, it sure was worth the trip to see the river so splendid, flowing serenely under a bright blue sky. 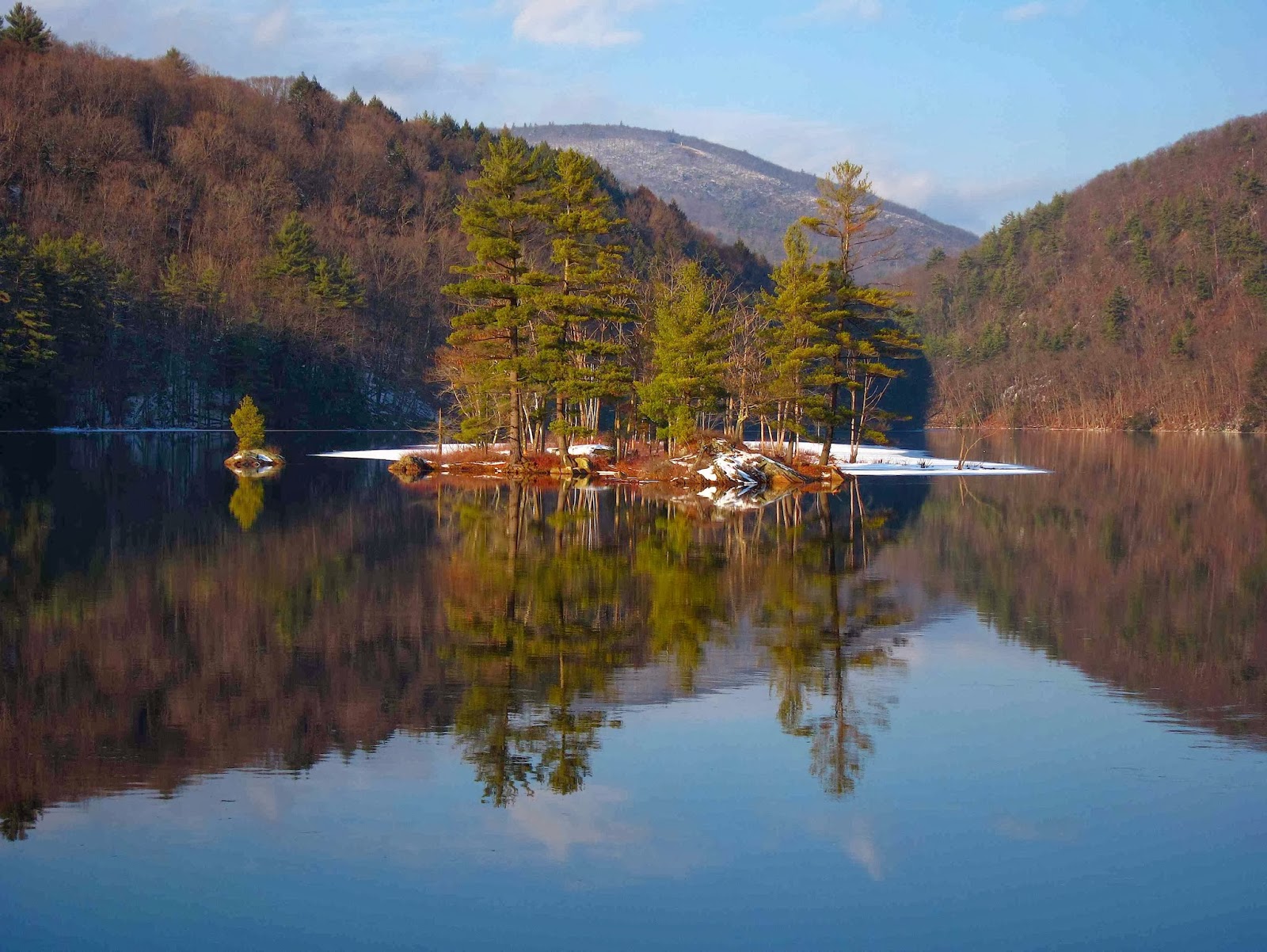 Next stop was Moreau Lake itself, still solidly frozen over with more than a foot of ice, despite several days of rain and above-freezing temperatures.   A dusting of new snow covered the ice, and a few ice fishermen were dotting the vast expanse of the lake's white surface.  I stopped to chat with a few of them, including my friend Dave, shown here enjoying the sun on his back and dipping his line in the water.

"Any luck today, Dave?" I asked, and Dave answered, "Sure, lots of luck!  A beautiful day to sit out here on this beautiful lake, and I never once had to get my hands cold and slimy by unhooking a fish."

I heard about the same story from Jim and Ed, two native New Jersey guys who just couldn't believe how lucky they were to be sitting out here on this beautiful lake surrounded by gorgeous scenic mountains and the kind of serene silence very hard to come by back in their own home state.   Did they catch any fish today?  No, but that didn't seem to bother them one bit.  I thought about folks who willingly spend big bucks to find silence and solitude at some yoga spa,  but all these fellows had found those treasures here, free of charge.


While chatting with Jim and Ed, I noticed an atmospheric phenomenon I had never witnessed before: clouds of vapor were rising from the sun-warmed surface of the lake and surrounding us with fog. 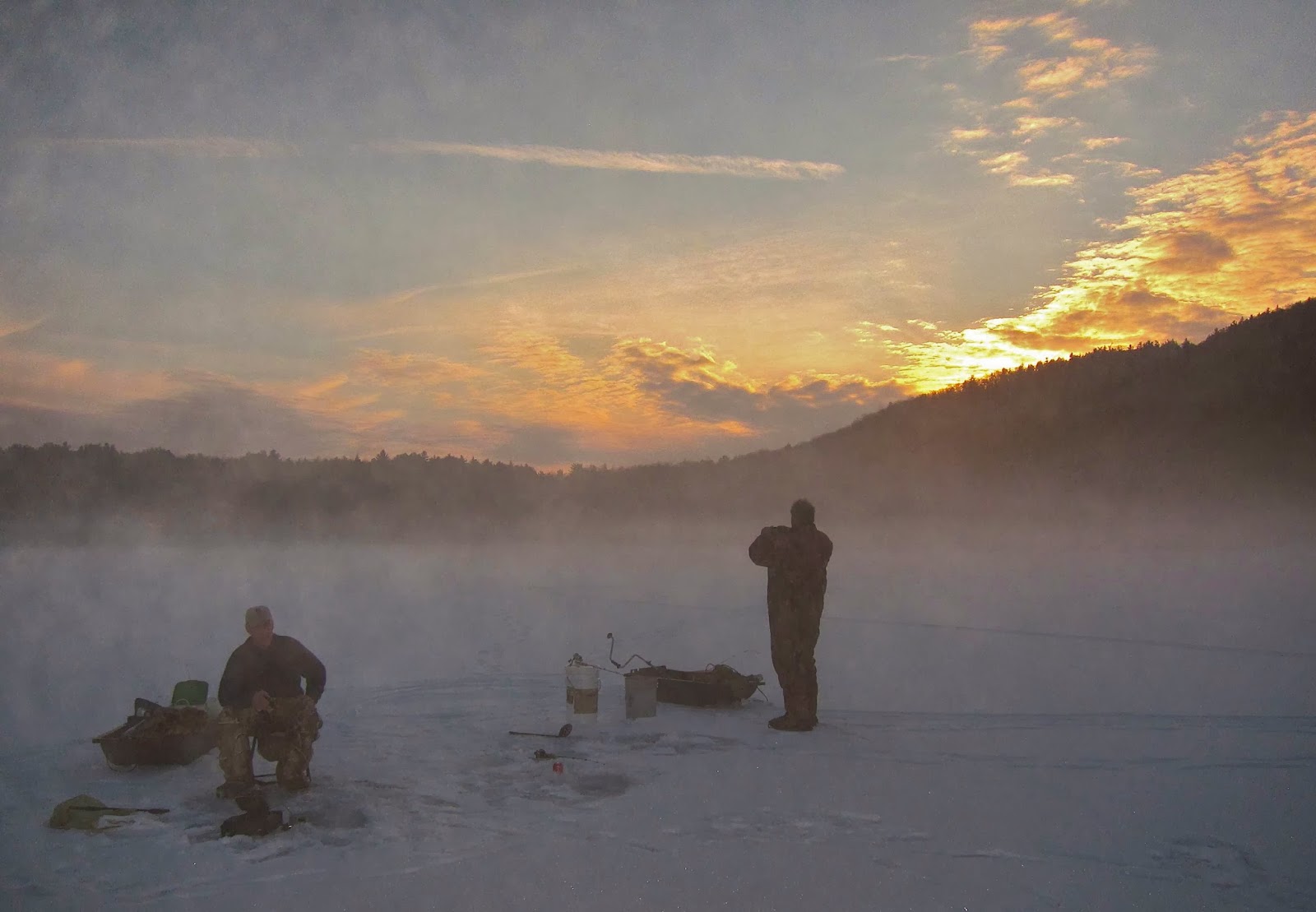 Within minutes, as the sun dipped behind the mountains and a chill fell over the lake,  the whole surface was covered with a dense layer of fog, as if a cloud had come down to rest on the snowy ice.


Another way this wondrous lake has of being amazing and beautiful.


Posted by Jacqueline Donnelly at 11:56 PM

Brilliant pictures of the river, and fascinating lake fog!

Beautiful! We saw a pair of bald eagles in downtown Fultonville this morning. Lovely photos!

Beautiful - but you'd never get me out there! This little southern girl would be terrified to walk on that ice. Intellectually, I would know it was sound, but I'd still be expecting to hear a loud crack ;)

Thank you, dear readers, for stopping to leave your kind comments. You are a major reason I keep recording and sharing these wonders.

threecollie, everyone except me keeps seeing eagles and owls everywhere. Even if I miss laying my own eyes on them, it delights me to know they are so numerous.

swamp4me, you would totally panic out on the ice, for no matter how thick and safe it is, it makes incredible cracks and roars and groans and howls. These noises even scare me, sometimes, and I grew up on frozen lakes.

Beautiful writing, this is such a majestic place!