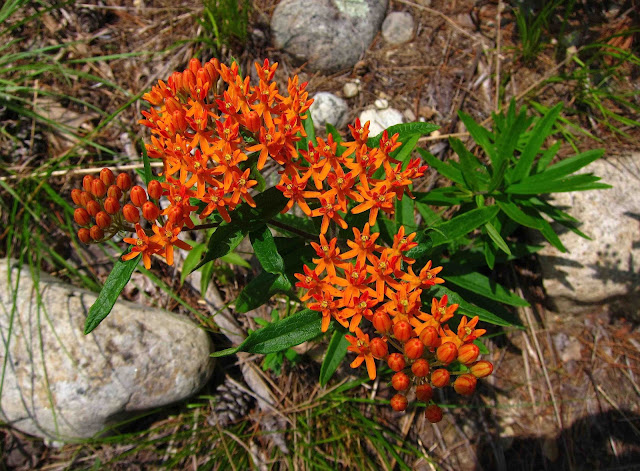 Could there be any wildflower as showy as beautiful Butterfly Weed (Asclepias tuberosa var. interior)?  I found it blooming abundantly along the Ice Meadows on Wednesday, and all kinds of insects had accepted its colorful invitation to come and partake of its pollen.  What struck me today was how many of those insects came adorned with colors to complement the vivid orange of the flower they were feasting on.

At first glance, this Banded Hairstreak Butterfly (Satyrium calanus) appears a dull dark brown.  But closer inspection reveals several spots of vivid orange on its hindwings near the tail-like projections that give this butterfly its common name. 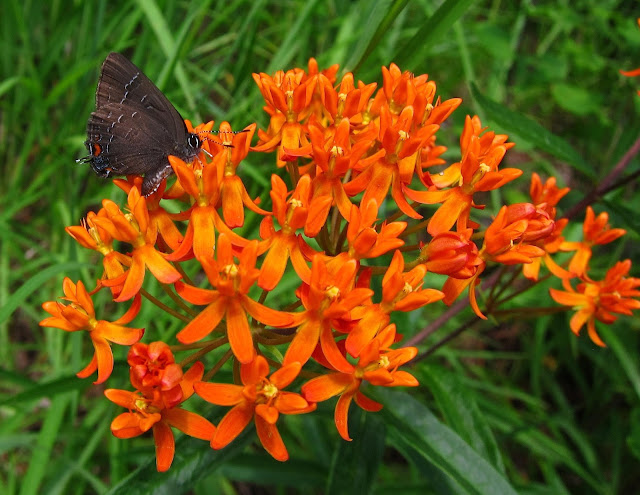 The American Copper Butterfly (Lycaena phleas) is not nearly so restrained about adorning itself with orange. 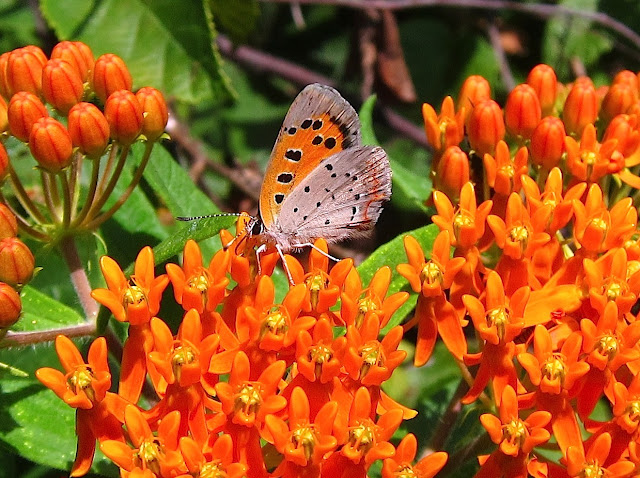 And here's a Great Golden Digger Wasp (Sphex ichneumoneus) that's perfectly attired to match its floral surroundings, with golden hairs on its head and thorax and an abdomen broadly banded with bright orange. 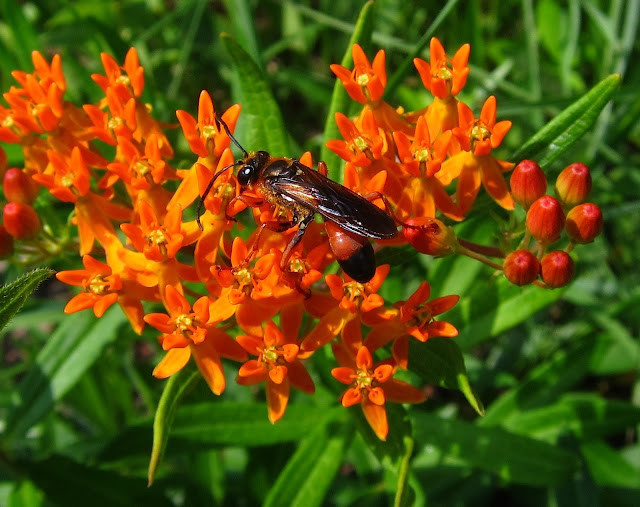 Posted by Jacqueline Donnelly at 12:38 AM

So beautiful! I love it although you don't see it around here very often.

Butterfly weed is my favorite of all the wildflowers. We have plenty here in WV.
Found your blog on Aging Gratefully. Beautiful photography. I'm looking forward to browsing it on a quiet evening.

Beautiful. Where are the Ice Meadows? I'm in New Paltz.

Thanks, threecollie. Your river bottom farmland might be too rich for Butterfly Weed, which prefers sandy barrens and roadside waste places. Try planting some and see if it will grow. It sure lives up to its name for attracting butterflies.

Nice to meet you, Marcia. Thanks for stopping by. Happy browsing.

Paul, the Ice Meadows are an 8-mile stretch of river banks upstream from Warrensburg where deep piles of ice accumulate each winter, creating a habitat that supports many rare and unusual plants. If you go to the top left of my blog and type "Ice Meadows" into the search bar (the blank box after the orange B), you will be able to see other posts I have published about this special place, including photos of incredibly deep piles of ice.

What an incredible orange colour!