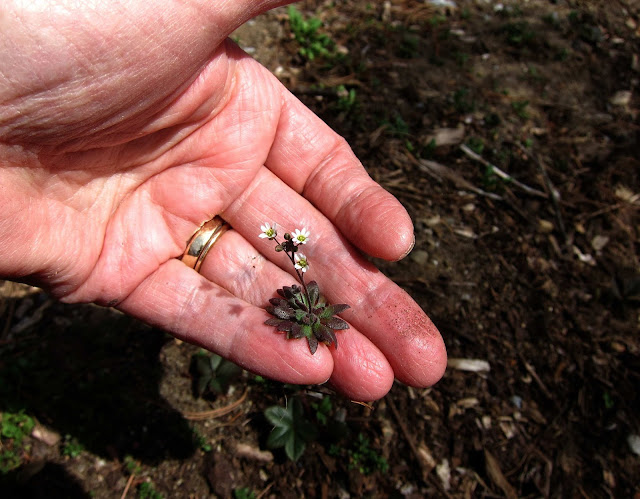 
Within a few weeks now Draba, the smallest flower that blows, will sprinkle every sandy place with small blooms. He who hopes for spring with upturned eye never sees so small a thing as Draba. He who despairs of spring with downcast eye steps on it, unknowing. He who searches for spring with his knees in the mud finds it, in abundance.

Draba asks, and gets but scant allowance of warmth and comfort; it subsists on the leavings of unwanted time and space. Botany books give it two or three lines, but never a plate or portrait. Sand too poor and sun too weak for bigger better blooms are good enough for Draba. After all, it is no spring flower, but only a postscript to a hope.

Draba plucks no heartstrings. Its perfume, if there is any, is lost in the gusty winds. Its color is plain white. Its leaves wear a sensible woolly coat. Nothing eats it; it is too small. No poets sing of it. Some botanist once gave it a Latin name, and then forgot it. Altogether it is of no importance -- just a small creature that does a small job quickly and well.


Like a favorite carol we love to sing at Christmas, Leopold's musings about Draba verna (also known as Whitlow Grass) bear equally enthusiastic repeating -- yea, even caroling --  as we rejoice in the return of one of the very first flowers of spring.  Such a wee bit of a thing, if it did not grow in such profuse numbers as to frost a sandy bank at Moreau Lake with a fine white haze, I would never see it.  But now I know to go looking for it on the first truly warm days of spring, as it was today.  And there it was!  Only a few days ago when I went to look, there was nothing but bare dirt, not even a sign of its wooly little rosettes.


There's another tiny, very early bloomer I went to look for today -- and found! --  at Orra Phelps Nature Preserve in Wilton, and even though this flower is many, many times larger than Draba, it is indeed very small, as trilliums go.  This is the dainty diminutive Snow Trillium, a brave little beauty that sometimes, true to its name, will come into bloom even while snow still lingers in the woods.  Even hard frost does not mar its pristine white flowers. 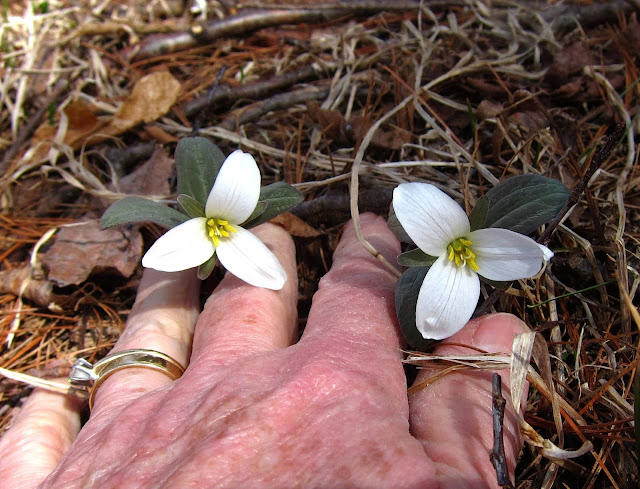 It's odd that this particular trillium should be so cold hardy, considering that its native territory is far to the south of upstate New York.  All my botanist friends believe that it must have been planted years ago by Orra Phelps herself, as she was wont to do with species that she loved.  By whatever route these lovely Snow Trilliums came to reside in Wilton, they certainly seem to have adapted well, for I found seven blooming today, surrounded by several other plants that may yet bear flowers.  If Orra did indeed plant these trilliums, I do thank her for it, for otherwise I would never have the privilege of laying my eyes on them.
Posted by Jacqueline Donnelly at 8:11 PM

I can't agree with Mr. Leopold. Draba plucks my heartstrings. And so does that beautiful little trillium.

I was about to say seeing those lovely snow trillium; so far from home are they! I too am thankful someone planted those and they have survived and persisted all these years later. It would be a shame others not fortunate enough to live in their native range to not see their early spring beauty!