I had thought, what with all the rain we've had this week, that the Skidmore Woods would be teeming with mushrooms today.  I went out there, dreaming of a big fat King Bolete to slice and fry up in butter, or maybe a giant heap of Hen of the Woods to stew up in a soup and fill my kitchen with the fragrance of the forest.  But no such luck.  I walked and walked the woodsy trails, getting drenched in a pouring rain, but not a single mushroom did I find, of any kind, either edible or deadly poisonous.
. 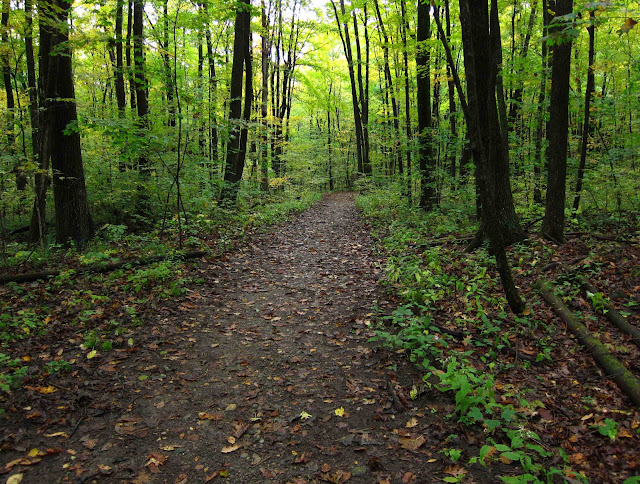 Ah, but I did find a slime mold!  How could anyone miss this blaze of bright orange, a mass of tiny shiny balls covering the underside of a well-rotted log? 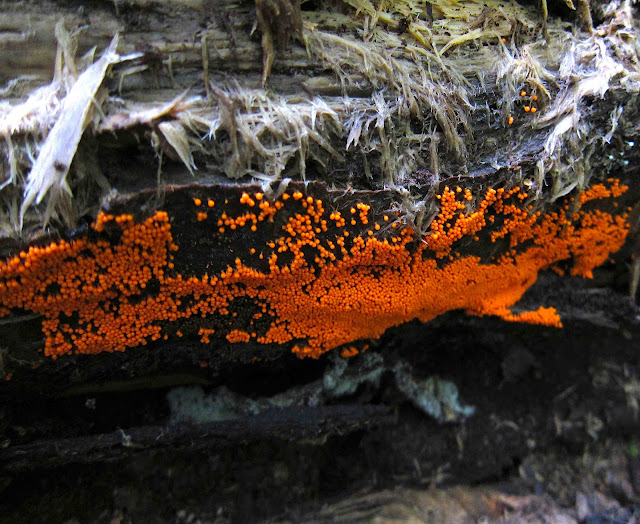 Of course, I didn't know for sure that this was a slime mold, so I broke off a little piece to bring home, where I found its look-alike in both my Audubon's mushroom guide and George Barron's Mushrooms of Northeast North America.  There I learned that these are the young fruitbodies of some member of the Hemitrichia genus that can't be positively identified as to species until it matures. 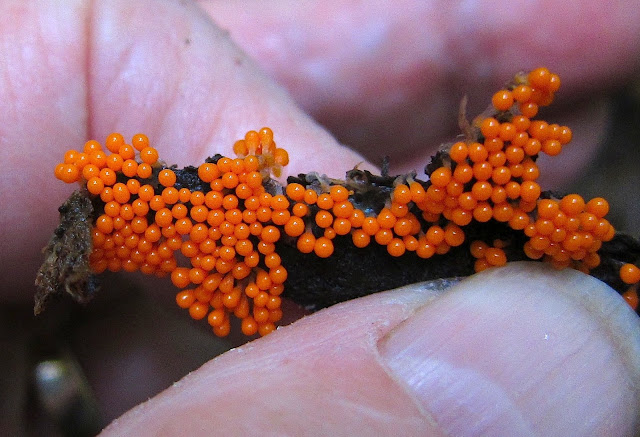 Although slime molds are usually included in guide books for fungi, they aren't fungi at all, but rather a kind of organism that doesn't fit easily into our biological classification system.  At an early stage of their lives they move freely about, eating and digesting and eliminating as animals do.  Then, at a later stage, they behave more like fungi, producing fruitbodies that contain spores, which are then dispersed by the wind.

I learned about slime molds mostly from Barron's book, which has a very informative chapter on this fascinating organism.  I'm planning to take that book with me tomorrow, along with my Newcomb's and my Beachcomber's Botany guide, when my husband and I head out to Montauk, on the furthest end of Long Island, for a little holiday at the seashore.  I won't be able to blog from out there, nor from up in the no-wi-fi regions of the Adirondacks, where I'll be spending Columbus Day weekend at Pyramid Lake.  So I'll be gone from my blog for over a week.   But I hope to have lots of wonders to report when I return.
Posted by Jacqueline Donnelly at 4:34 PM

Your search for mushrooms makes me picture you as a witch from a fairy tale. :-)
The life cycle of this slime mold is fascinating...it changes from (more or less) an animal to a plant...? Sounds extraterrestrial.

We'll wait for you, Jackie. Your blog is worth it!

There's some of those spongy fungi things in my domain...I'll post a few photos for you soon~

Your friend in fur,