While getting a haircut and gabbing with my hairdresser yesterday, I told her about finding those big old Black Tupelos in Moreau Lake State Park, and she told me about a big old tree she herself had seen:  an ancient Sugar Maple standing along the side of Parkhurst Road in Wilton.  "It's supposed to be the largest in the state," she said.  So of course that's where I sped off to, as soon as she brushed the hair clippings from my neck.

I know Parkhurst Road very well, a lovely rural woodsy road that lies along my route to the Hudson River on the other side of Mount McGregor.  I couldn't remember any trees there as being especially large, but this time I traveled slowly along, searching for one that might stand out from the rest.

"Aha!  I'll bet that's IT!" I thought, catching a glimpse of this gnarly old giant while searching for a place to pull over on the shoulderless road. 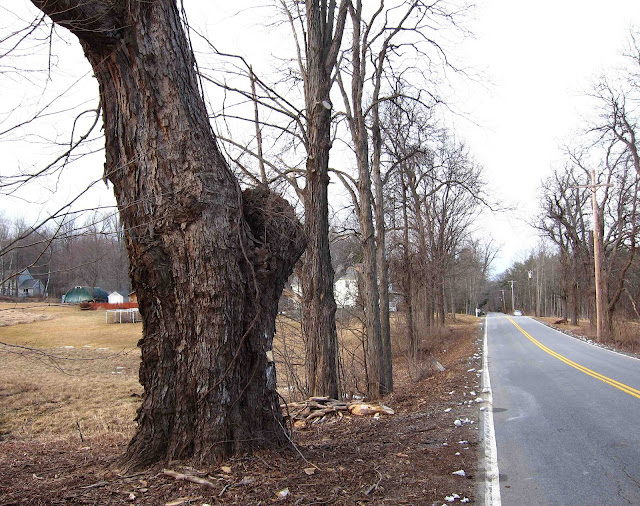 As I approached the tree on foot, I could see that someone had attached this plaque to the trunk.  How appropriate that the plaque was signed by someone calling himself (herself?) The Lorax, a character in one of Dr. Seuss's books who claims to speak for the trees. 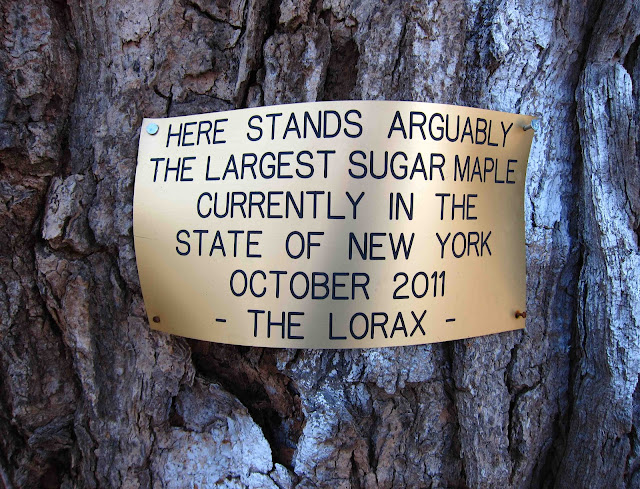 I wish I knew who that person was, so I could ask how he came to assert this claim and what measurements had been taken.  When I googled "largest sugar maple in new york state," I found a reference to another tree in Ontario, NY, over in Wayne County on the shores of Lake Ontario.  That Sugar Maple, which stands on the grounds of the Heritage Square Museum, was measured and dated in 1996, with a circumference of 17' 10" and an age of 368 years, about as old as a Sugar Maple can get.  I guess I will have to come back with a tape and take this Parkhurst maple's measurements.  I wonder if any core samples were taken to determine its age.  That may be difficult to do, for, as a recently sawed-off limb reveals, the tree may very well be hollow at its core.

I tried taking some photos of this impressive giant, but it's very hard to give any idea of its size and presence from a photograph. 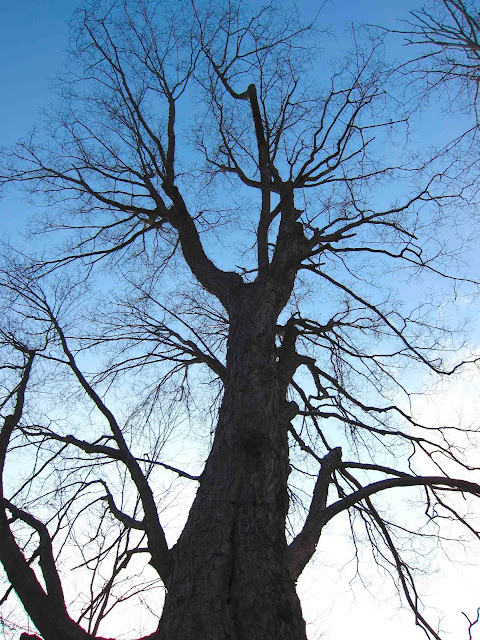 While I crouched in the middle of the road peering up, a passing driver slowed down to ask if I needed help, which gave me the opportunity I needed.  "Would you be willing to snap my photo standing against this tree?" I asked, and the very nice lady obliged me. 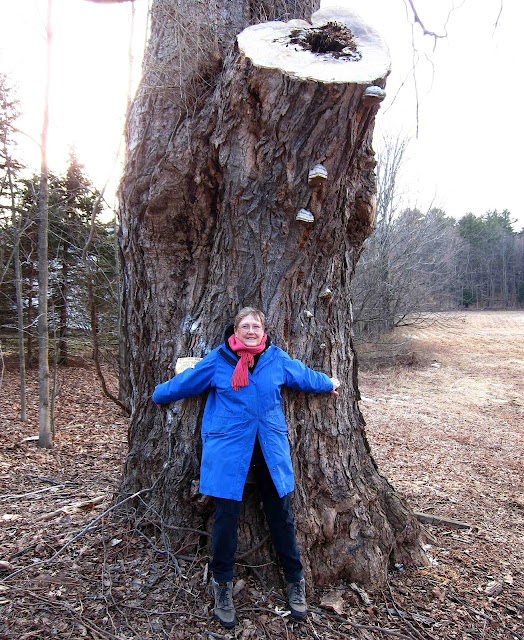 I think she, too, was impressed by the size of the trunk and delighted to learn about this tree, which she had passed every day without a second look.  As had I.  My world grows larger and more fascinating every day.
Posted by Jacqueline Donnelly at 8:13 PM

So cool! I am on that road frequently and will look for it as well. Alice and I visited the Grandmother's Tree 2 years ago. Said to be the oldest White Pine at about 320 yrs. Tree "collecting" is so exciting. I would love to hear of more of your finds.

Yes, without you standing there next to it, the actual size really isn't apparent!

And knowing that you are not a short person makes the size of this tree even more impressive! You should see some of the oaks around here. Actually, down in Goll Woods in OH - that's where some really impressive burr oaks live.

ahah, your pose looks like "Woodsman, spare that tree !"
Maybe we will meet The Lorax someday!

Wow! I am so glad you put in that last picture. The tree is MUCH larger than I imagined from the other photos.
Just imagine the years and years it's lived through!!!

try looking on plank road in porters corners theres some maple trees close to that size along that road too !! awesome tree